As we documented in previous articles, the gold price is driven down in the paper futures market by naked short selling by the Fed’s dependent bullion banks. Some people have a hard time accepting this fact even though it is known that the big banks have manipulated the LIBOR (London Interbank Overnight Rate – London’s equivalent of the Fed Funds rate) interest rate and the twice-daily London gold price fix.

Almost every week it is possible to illustrate the appearance of a large number of contracts shorting gold at times of day when trading is thin. The short-selling triggers stop-loss orders and margin calls and hammers down the gold price.

The Fed has resorted to this practice in order to protect the value of the US dollar from Quantitative Easing.

In order for the Fed to effectively support the reserve status of the U.S. dollar by pushing it higher when it starts to drop, the Fed has also to prevent the price of gold from rising. Intervention in the gold market has been occurring for a long time. However, in the last several years the intervention has become blatant and desperate, as rising concerns about the dollar are causing countries such as China and Russia to accumulate fewer dollars and more gold.

During the month of March the Fed and the big banks implemented aggressive intervention against the rising price of gold and the plunging value of the U.S. dollar. Events in Ukraine may have stimulated demand for physical gold and selling of the U.S. dollar, but it was mainly further erosion of the U.S. economy, as reflected in more deterioration of economic data released during March, that pushed gold up and the dollar down.

The dollar index is a “basket” of currencies used to measure the relative value of the U.S. dollar. The largest components of this basket are the euro and the yen (it also includes the British pound, Canadian dollar, Swedish krona and Swiss franc). During February and March, the dollar started to decline in response to increasingly negative U.S. economic reports, continued Fed money printing (QE) and the Ukraine crisis.

On the last day of February, the dollar index dropped below 80. The 80 level is a key technical trading level and if the dollar were to stay below this benchmark for an extended period of time, large holders of dollars would start selling their dollar holdings out of fear that the dollar would be headed even lower. The Fed and the U.S. Treasury needed to do something in order to force the dollar index back over 80.

As part of its intervention in the currency market to get the dollar back over 80, the Fed also needed to stop gold from rising back over $1400, which it was on the verge of doing by the middle of March. Just like 80 is key level, below which technical selling of the dollar kicks in, $1425 is another key level for gold for which large buy and short-covering orders would be triggered. In other words, to support any manipulated move higher in the dollar, the Fed needed to intervene in the gold market to force the price of gold lower. The graphs below illustrate the key points of dollar/gold intervention during March. 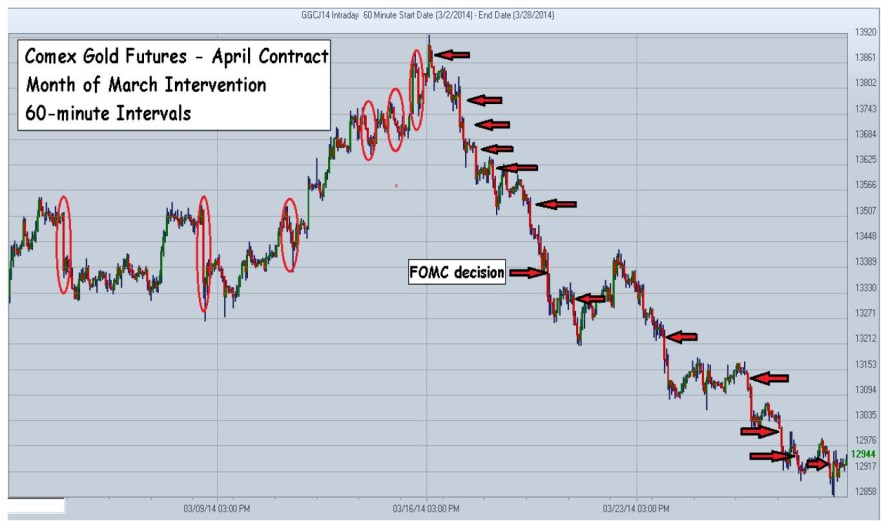 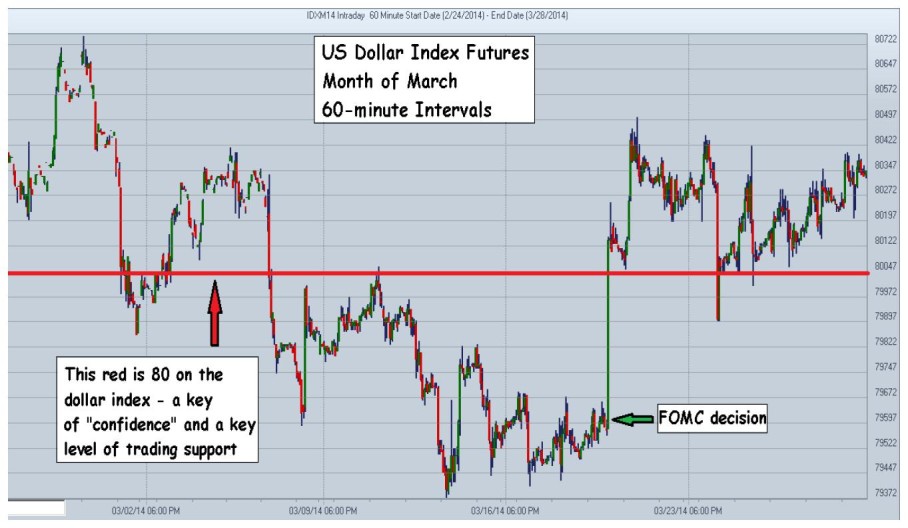 As we reported previously, the Fed, using its agent banks like JP Morgan and Goldman Sachs, intervenes in the gold market by “bombing” the market with a large quantity of Comex gold future contracts. This typically occurs at periods of time when the market is very quiet and trading is at a lull. These engineered market interventions are now commonly referred to as “mini-flash crashes.”

As the dollar was consolidating its trading range below 80 and the price of gold was headed toward $1400, flash crashes started occurring more frequently and with more intensity. During the first week of March, gold was getting ready to shoot through the $1350 level and the Fed used two distinct flash crashes to contain gold below $1350 (first two red circles on the graph).

During the week of March 10th, the price of gold started moving quickly higher toward the $1400 level, as the Ukraine crisis was front and center in the news and investors moved money into the safe-haven of gold. The Fed used several mini-flash crashes in an attempt to contain the move. The red circles on the gold graph show the points in time in which the Comex gold futures market was “bombed” with contracts in order to slow down the upward momentum that the price of gold was gaining in the first half of March.

Then early in the morning on March 17th, with the tension subsiding somewhat between the U.S. and Russia after Crimea voted to join Russia and war didn’t break out, the Fed and its agent banks went to work on manipulating the price of gold lower and forcing the U.S. dollar higher . The red arrows on the gold graph show where the Fed dropped gold future “bombs” on the gold market in order to force the price of gold lower. The huge bursts of sell-volume almost always occurred during periods of low trading activity.

On March 18th, the Federal Reserve Open Market Committee (FOMC) convened for a two-day meeting, with its policy statement to be released March 19th at 2 p.m. EST. A study of how gold performs during the week in which there is an FOMC meeting showed that, on average, gold drops $37 for that week. This compares to almost no change during the same week during months in which no meeting is held. As you can see, the mini-flash crashes were used to force the price of gold down $72 from top to bottom during the March FOMC meeting week. The dollar graph shows the big spike in the dollar, which took the dollar back over the 80 level right after the FOMC meeting was concluded.

The Fed’s aggressive engineering of the mini-flash crashes continued during the last week of March. The group of red arrows on the right side of the gold graph show points in time Monday (March 24) – Friday (March 28) when there were sudden bursts of high volume selling in the April gold contract. Monday’s flash crash to start the week involved 6,437 contracts dumped onto the Comex right as the Comex gold trading floor opened at 8:20 a.m. For comparison purposes, 855 contracts had traded the minute before the Comex opened. Recall from one of our previous articles that gold gets hit right at the open of the Comex flooor trading session at least 85% of the time. This serves to set a downward momentum for the day’s trading.

Remember, the purpose of Quantitative Easing is to support the balance sheets of a few over-sized banks and to finance the federal budget deficit at an artificially low rate of interest. In other words, QE supports failed banks and federal fiscal irresponsibility. In order to successfully carry off this blatant misuse of public policy, the price of gold, a measure of the dollar’s value, must be suppressed. The Federal Reserve’s lack of integrity speaks volumes about the corruption of the US government.