For years, we've watched JP Morgan stockpile what is alleged to be physical gold and silver in their COMEX vaults. However, something has changed over the past four months and we thought we should bring this to your attention today.

During the silver price run-up of 2011, JP Morgan was seemingly caught flat-footed. They appeared to hold a massive paper short position while simultaneously holding no visible physical position. At the time, JPM did not have a COMEX silver vault and, as the CFTC-generated Commitment of Traders data showed at the time, the last $10 of price surge was almost entirely due to a "commercial" short squeeze. The most likely "commercial" being squeezed in April of 2011? JP Morgan.

Also in the spring of that year, the was a rapid approval for JP Morgan to start their own COMEX silver vault. Evidence of this can be found when we review how this vault came about in March of 2011. This old link details how JPM was suddenly and quickly approved to establish this new COMEX silver vault: https://seekingalpha.com/article/259549-will-jpmorgan-now-make-and-take-delivery-of-its-own-silver-shorts

After starting from ZERO in 2011, JPM has quickly amassed a horde of COMEX silver and now has a virtual stranglehold and monopoly on this "market". As of last Friday, JPM's COMEX silver vault held 112.5 million ounces versus a total COMEX vault of 213.3 million ounces. This means that JPM now holds/controls nearly 53% of all silver backing the COMEX silver paper derivative exchange. 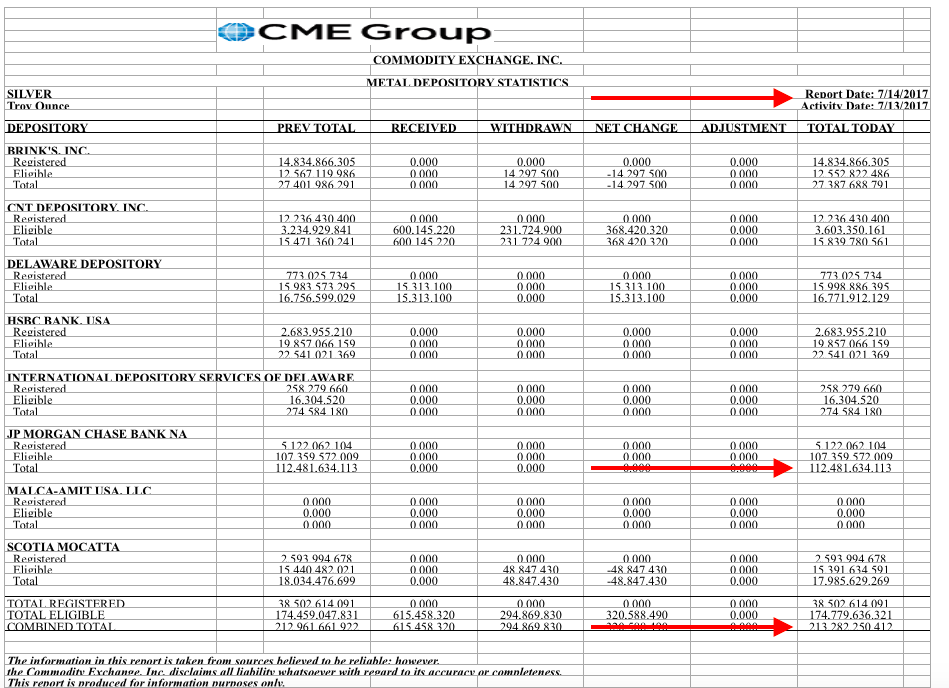 To help you better understand the scope of this, check these next two charts (click to enlarge). First, here's an old COMEX silver stocks report from June 3, 2011. Note the following: 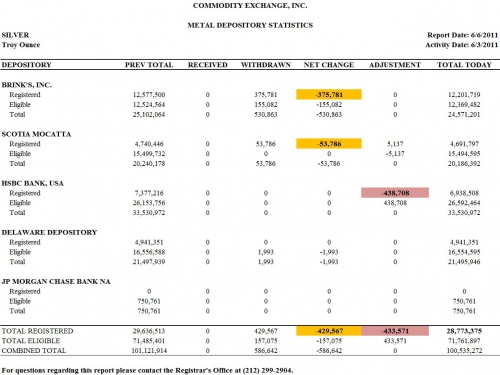 This next chart I found on Twitter over the weekend and it comes from the always helpful Nick Laird. It shows in dramatic fashion the rising dominance of JPM and their silver vault on the COMEX: 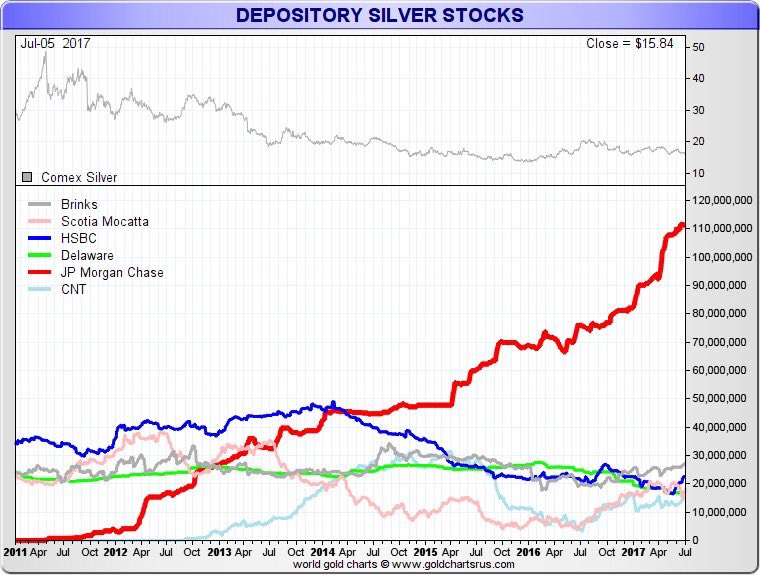 JPM seems to have largely amassed this horde through the steady acquisition of silver through the bi-monthly "delivery" process on the COMEX. If we check the records since 2015, we see this play out. While only rarely issuing a contract, the House or proprietary account of JPM has consistently stopped (taken) "deliveries" since March of 2015. See below:

This hoarding continued into 2017 when JPM House stopped a whopping 2,689 contracts back in March. This represents a "delivery" of 13,445,000 ounces and is clearly WELL IN EXCESS of the stated COMEX front and delivery month position limit of 1,500 contracts. We wrote about this at the time and even went so far as to file a complaint form through the CFTC website. You can read all about it here: https://www.tfmetalsreport.com/blog/8243/march-comex-silver-deliveries

Now why would this be? Does JPM finally feel as if they have enough silver? Did their violations back in March result in a slap in the wrist from the CFTC? Who can say for certain? What's clear, however, is that with a physical horde of 107,000,000 ounces in their eligible vault, JPM now has enough silver to physically settle and cover 21,400 COMEX contracts should they ever begin to get squeezed again as they did in 2011. (This of course assumes that the entire 107MM ounces is owned/controlled by the JPM House account.)

Adding more intrigue to the question, however, is what we're also seeing in COMEX gold. In 2015, the House account of JPM was actually a NET issuer of COMEX gold contracts. Some months they issued and some months they stopped (took "delivery") and the result was an issuance of 1,109 COMEX gold contracts for NET loss of 110,900 ounces of gold. This changed in 2016 though as the JPM House account ended up with a NET stoppage of precisely 8,000 COMEX contracts for 800,000 ounces.

And so here we are. After being an active collector and hoarder of "physical" gold and silver through the bi-monthly COMEX delivery process, the activity of the House account of JPM has suddenly come to a grinding and complete FULL STOP. And the question is: WHY? Why, after participating in every gold and silver "delivery" month for years, has the JPM House account suddenly ceased all activity? Again, are they "full"? Has the CFTC slapped a penalty upon them for repeatedly exceeding delivery month position limits?

Most importantly, what if anything might this mean for price? Has JPM conspired to keep prices low for years so that they could acquire metal as inexpensively as possible? Maybe. And, now that they appear to be "done", might price finally be allowed to rise? Again, maybe.

Unfortunately, all we can do is speculate. The actual answers will very likely never be known as the only thing that remains constant in the world of the paper derivative pricing scheme is the deliberate opacity of the process.