- Zero rates made the value of assets explode; thus, the yields of those assets also tend toward zero, since there is no added wealth creation that comes with them.

- The central banks’ support of the economy and zero rates are blocking the necessary creative destruction described by Schumpeter. Thus, the consequence of this latent crisis – which seems painless – is a slow breaking down of the economic fabric.

Dominique Strauss-Kahn recently argued in an interview that the world is less prepared today to face a financial crisis.

Ray Dalio, one of the 100 richest men in the world and unmatched financial manager, tells us that the situation is similar to the one at the end of the ‘30s.

And Jeffrey Gundlach, another billionaire fund manager, told us in July, 2018, that the Fed was on automatic pilot and that it would provoke the next crisis without being able to do whatever to fix it, because it’s too late.

All these announcements by people who work differently, who have different functions, point to a common diagnosis on the economy. Today, with this longer-than-usual episode, we shall try to understand the basis of their thinking.

Truly, if you understand and integrate today’s episode, you will have understood everything about the mechanism of this actual crisis.

One has to understand that the economy is a complex system and machinery of which each wheel is connected to numerous other wheels.

Besides, there are many mechanisms that are hard to understand in all their details, having too many connections for our small brains to fathom.

So one must over-simplify and run the risk of being almost right at large while, of course, being wrong on some details.

It’s like climate... I can predict the rhythm of seasons, but I can’t predict next week’s weather.

In this case, let’s go with some fuzzy, but very, very robust bases of our economy. Let’s start with Joseph Trumpeter’s creative destruction.

Yeah, really, it’s simple. The economy functions well as long as businesses go bankrupt when they become bad or are behind the times in order to allow new businesses, new ideas to emerge.

That’s it. When a company goes bankrupt, it is not solely bad news because it frees capital that was being used for bad results, and it also frees workers who can then go work somewhere else where they’ll be much more useful.

This is the reason why the automobile has replaced horse carriages and that outdated businesses have stopped polluting the market with junk. To make it simple, creative destruction allows an economic fabric that is sound, of high quality. Okay, then what?

We know a CEO needs three things to get a business going. He needs a workforce, capital, and the ability to project it in the future, to anticipate things as much as possible. But what does it mean, concretely?

Yes, stability is the real basis. But, to go further, one must understand that there’s a price to pay for the future.

Wow, how vain! You see everything through money...

Let’s look at it this way: If I want to create a business, I have to borrow money. The more time I ask for reimbursement, the more it creates uncertainty. So, logically, my banker will raise the interest rate to cover for a bigger risk.

Oh, yeah, interest rates are the price to pay for the future. It makes sense. But aren’t very low rates fine, in the sense of showing stability?

If interest rates were not imposed by central banks, yes, perhaps. But today, the market is broken. No one is telling the lender and the borrower to settle on a rate between themselves. No, central banks are telling them that they know better than them what should be the right rates for their businesses, and they impose them by force.

Sure, but there then must be some kind of differential with reality. If something is worth 100 $ and a law forces you to buy it at 50 or 150... it’s going to cause some problems in both cases, right?

Yes, and yes again. We’ve talked about it here with Knut Wiksell’s theory.

To make it simple, let’s admit that pushing interest rates higher than what they should be will put a damper on the economy, which will underperform due to the economy not offering sufficient yield to pay for the cost of money, basically.

If I own a business that yields 5% and interest rates are at 8%, it will make it complicated to invest in it...

Conversely, pushing interest rates lower will raise the price of almost everything, if we but exaggerate a little.

Those who are able to borrow will be able to get cheap money to purchase assets with good yields.

If I can borrow at 2% while, on average, businesses yield 8%, all I have to do is to invest in the most solid of those businesses to earn some money without doing anything.

Yes, but not everyone can borrow on those terms. It’s mostly rich people who can do it. And, when selling something, one has to offer it at a little higher price than it’s worth, and prices rise.

Exactly. And as all of those who are able to borrow buy all they can each time rates go lower, prices go up and, consequently, yields decline until asset yields get balanced with interest rates.

Yeah, this is why real estate prices are so high in large cities, while the renting prices have not increased that much. Thus, if the rents are stable and the prices of the apartments skyrocket, the yield declines.

So, I think I understand. At the end, when we artificially lower interest rates, this makes the price of what we call assets – stocks, state bonds, real estate and much more – go up. At the same time, it makes debt skyrocket as well, because everything is being bought through debt...

This is very sad... but who are the losers at this game?

The losers are the workers, those who can’t borrow to earn money without doing anything.

Basically, the value of a business is comprised of the CEO’s idea, the work of the paid employees and the remuneration of capital, the shareholders.

If prices increase and yields decline, the workers will lose, because their salaries won’t go up.

Their rent will be higher. Anyhow, how can you have minimum salary workers in Paris to work in cafés in the 1er arrondissement when rent is 10 000 € a square meter?

And they will struggle like hell to build a pension because, when they put money on their pension insurance, there will be no more yield to pay for it. This is why we read in the papers that German pensioners are unhappy, for instance.

Sad... are the CEOs winning as well?

More or less. CEOs who ran their business prior to all this mania and have seen prices explode, yes. CEOs who were running underperforming companies and had them refinanced on the cheap to survive, yes. But the young CEO with new ideas and strong potential will not find financing and will stay home, embroidering, because the money has already gone to the other two.

Wait... this, also, is a problem. Weren’t we talking about creative destruction at the beginning? But, what if there are no more businesses?

Right. It’s very probably one of the main causes for the slowing down of the “famous” growth, among other things. But this is also why the number of zombie businesses is exploding.

What is a zombie business?

It’s a business that pays more interest than it garners benefits. It has what is called non-performing loans (NPLs) in the banking vocabulary. In Europe, we have reached a €Trillion of NPLs within the banking system.

Oh... this is why Strauss-Kahn explains that 8% of capital Deutsche Bank won’t do a thing to help.

Exactly. And he knows very well that Deutsche Bank, like most French banks, has much less capital than 8%.

8% indebtedness corresponds to a 12X leverage. Each euro of the bank’s equity has been loaned 12 times. It’s quite reasonable in normal situations. But enquiring minds such as Jean-Pierre Chevallier have calculated that the largest French banks are not at a 12X leverage, but rather at a 30X level... now, this is really scary.

Curiously, DSK talks about Deutsche Bank as a risk factor; it’s not only the French banks... It scares the hell out of everyone.

This is also why Ray Dalio explains that our times look like the ‘30s, when debt was excessive, that Warren Buffett has a large quantity of cash in his portfolio, and that Jeffrey Gundlach explains that the Fed will go all the way to insanity with interest rates, because it has no choice. This is also why Nouriel Roubini talks about two scenarios that will potentially trigger the next crisis in 2020.

We have the feeling that things are holding tight, because nothing is violently exploding. But, in reality, the fundamentals of our economy are going down the drain with first place being taken by creative destruction.

Even more clearly, it’s the quality of businesses, of the value creation system, that is taking the brunt of this problem.

If we admit that things can remain in this state – which I don’t think so, with the system being so fragile – that would mean that growth, which has largely already disappeared, will end up being negative and crumble under the weight of all the zombie structures that are parasites to the economy.

In any case, I hope that this lengthy episode, a little longer than average, will have allowed you to connect more dots together and get a more global understanding of what is not working. 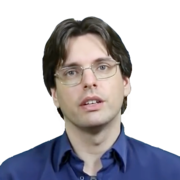