Welcome to the wonderful world of illusions. This is a world where few people can see the difference between reality and fantasy. And maybe there is no difference. Just looking at the US election and the candidates, it seems like total fantasy from this side of the Atlantic. It is difficult to take the whole election process as well as the candidates seriously. But this is the world we live in today. Having in the last week seen people in many European countries run around the countryside and cities chasing Pokémon Monsters, you wonder if the presidential candidates might also be part of the same game.

Global stock markets are out of sync

It seems like markets are also an illusion. How else can the Dow be 63% above the 2000 high whilst the Euro Dow 50 stocks are down 45% in the same period and with Emerging Markets down 36%, Brazil and Hong Kong down 35%, Nikkei down 25% and Shanghai down 49% all since 2014-15. We live in a totally interconnected global economy but there just seems to be more skilled illusionists in the US who can defy reality. With corporate profits declining fast, with current account and budget deficits for half a century, with 95 million people not in the workforce, almost 50 million on food stamps, with Q2 GDP at 1.2% (if real inflation rate was applied GDP would be negative) and with exponentially growing debts of over $200 trillion (incl. unfunded liabilities), you wonder what US investors are smoking.

The illusory Dow finished July at an all-time monthly high. Stock markets in general tend to totally ignore reality and US stocks in particular are living on a different planet. The Schiller P/E is now 27 with the average at 16, the US market is in bubble territory.

Stocks to decline by over 95% against gold 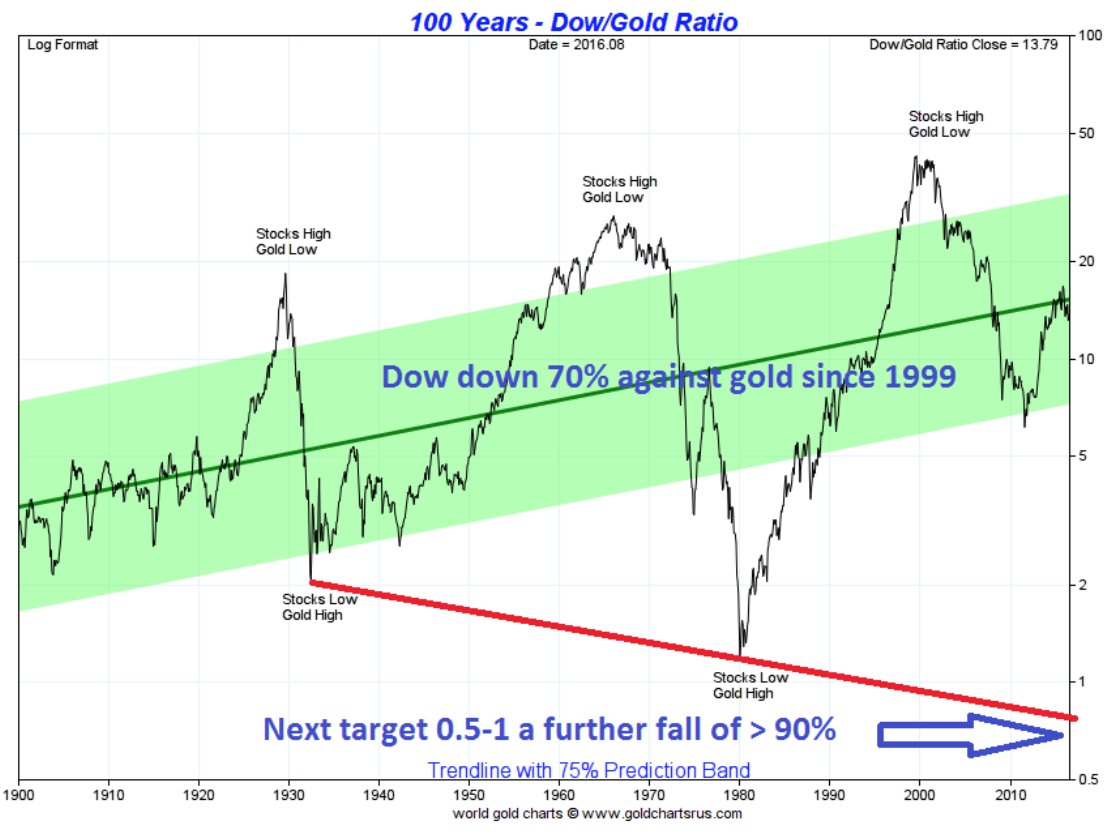 In spite of the manipulation of gold and gold stocks, gold will always over time reveal the truth. And the truth is that the massively inflated US stock market is underperforming in real terms in spite of making new highs. Because since December 2015, the Dow is down 19% in real terms which of course is against gold. This puts the Dow/Gold ratio at 13.6. The Dow is in a long term down trend against gold since 1999 and is down 70% in 17 years. But it won’t end there, this ratio will at least reach the 1980 low of 1/1 but probably overshoot to at least 0.5/1. Will this mean gold at $10,000 and the Dow at 5,000 or will it reach Martin Armstrong’s hyperinflationary level of 40,000 Dow which would make gold at least $80,000? In either case, the Dow is likely to decline at least 95% against gold.

And against gold stocks, the Dow is down a massive 58% over the last 7 months. We are likely to see this index reach the 2011 level at least. This means that the Dow will come down another 72% against the HUI gold index.

But the illusion doesn’t stop with stock markets. The global banking system is an even bigger illusion. The financial system was bankrupt in 2006 but governments and central banks around the world managed to patch it up by injecting $25 trillion and by allowing banks to value all toxic assets at maturity instead of at market. Here we are 10 years later and the financial system is now in a much worse state than it was in 2006. Global debt has grown exponentially since then by 65% from $140 trillion to $230 trillion. And this figure doesn’t even include unfunded liabilities and derivatives of another $2 quadrillion or so. We are looking at total debt of over 30 times global GDP. But that is a false comparison. Let’s say that 5% of GDP could be saved annually to reduce debt and that would be very optimistic. Anyway, with 5% of GDP it would take over 600 years to get rid of all debt. However you calculate it, the world is bankrupt and will never repay its debts. Nor will the debt be serviced at any rate of interest above zero. 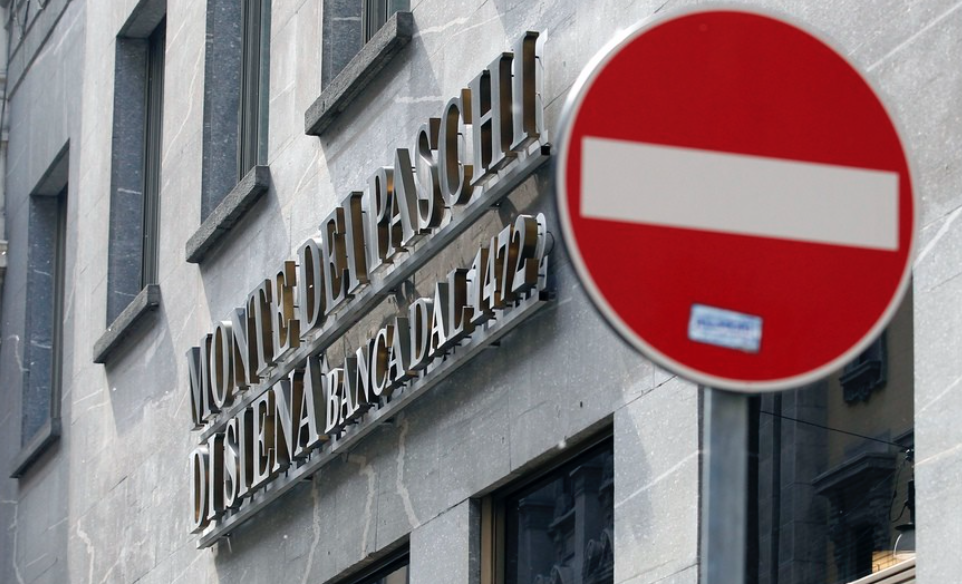 Global banks have just had an illusory stress tests. Countries like Portugal and Greece were naturally excluded as their banks are bankrupt. The criteria were set so that every bank would pass except for Monte dei Paschi in Italy. Since the whole world knew that this bank is bankrupt, it was impossible to cheat. Otherwise in the illusory world, all banks were considered to be in decent health. The top performing banks were the Swedish ones with Swedbank and Nordea shining. This is particularly fascinating since only a few weeks ago, the regulator in Sweden, in an internal report, had expressed particular concern that Nordea was severely undercapitalised to the extent of SEK 50-80 billion. This report was quickly hushed down and clearly ignored in the stress test.

The total failure of the IMF has just been exposed by the IEO (IMF Independent Evaluation Office). IMF stands for International Monetary Fund but International Manipulative Fund would be more accurate. Because the IMF is a political entity that serves the political aims of its masters. The recent IEO report has just condemned the IMF for total misjudgement and complacency in connection with Greece. All projections and actions of the IMF have been a total failure according to the report and have contributed to the demise of Greece. In other words, the report confirms that the IMF hasn’t got a clue. The IMF seems more interested in political manipulation than monetary assistance. The IMF verbal intervention in the Brexit referendum on the Remain side confirms this.

Central banks worldwide are really struggling in their futile attempts to get out of the mess which they have created. In Japan, Abenomics is totally failing in spite of unlimited money printing and negative interest rates. Before the Japanese economy sinks into the Pacific there will be perpetual bonds with no or negative interest and more helicopter money. Japan is doing all it can to win the currency race to the bottom but currently with the yen strengthening, the world is making the race difficult for Japan. The Fed has since 2015 left the world with the illusion that rates would go up in 2016. Already back in December when the Fed raised rates and indicated several more increases, I stated that the US would also go to negative rates and it still seems probable that this will happen in 2016.

Gold will be the only money standing

Turning to the US dollar, it looks particularly sick currently. It seems likely that the dollar will soon start a major secular downturn. The world’s reserve currency is greatly overvalued and due to the state of the US economy discussed above with ever increasing debts and current account and budget deficits, the dollar will soon start the final leg to its intrinsic value of zero. It has been a 100-year race but it now looks clear that the dollar will be first to the bottom of the major currencies. This will have significant effects on both debt and stock markets.

Gold and silver will be major beneficiaries of the dollar’s decline. US dollar based investors still have a window to get out of dollars and out of the US. But soon there will be exchange restrictions that will prevent this.

It is very important not to own illusory or paper gold. It must be physical gold and silver which is stored outside the fragile banking system. ETF are not recommended. Most ETFs don’t hold the metals free and clear, whatever they say. Also they store the gold and silver, if they have it, in banks which is not where investors want to hold it. In addition, the ownership is subject to counterparty risk since it is signified by a piece of paper held within the financial system. Physical precious metals, held correctly, is the best insurance investors can own against a totally rotten financial system.