Trade body Indian Bullion & Jewellers Association (IBJA) has created a flutter among some of its 2500 members by informing them through a text message that the government might ban imports of gold into the country until the end of the current fiscal year (FY17) and advance the last date of deposit of old notes for jewellers to November 15 to crackdown on black money.

"We hear from certain circles of this possibility (gold import ban and advancement of deposit date) though nothing official is out yet," said Surendra Mehta, national secretary, IBJA. "The association is supportive of the government's fight against black money and has informed its members of the possibility of such action. We have asked our members to support the government wholeheartedly."

The move of a likely ban on imports was termed "draconian" by one trade member, even though Mehta tried to downplay its significance.

"Already, 600 jewellers have received notices from the tax department to disclose their sales till November 8. We are aware that certain members of the trade are importing gold only to sell the same against old notes at a hefty premium. So, if the government wants to stop this malpractice it might consider a ban on imports. Alternately, if it directs all jewellers to deposit or declare old notes by November 15, it would not necessarily consider banning imports." 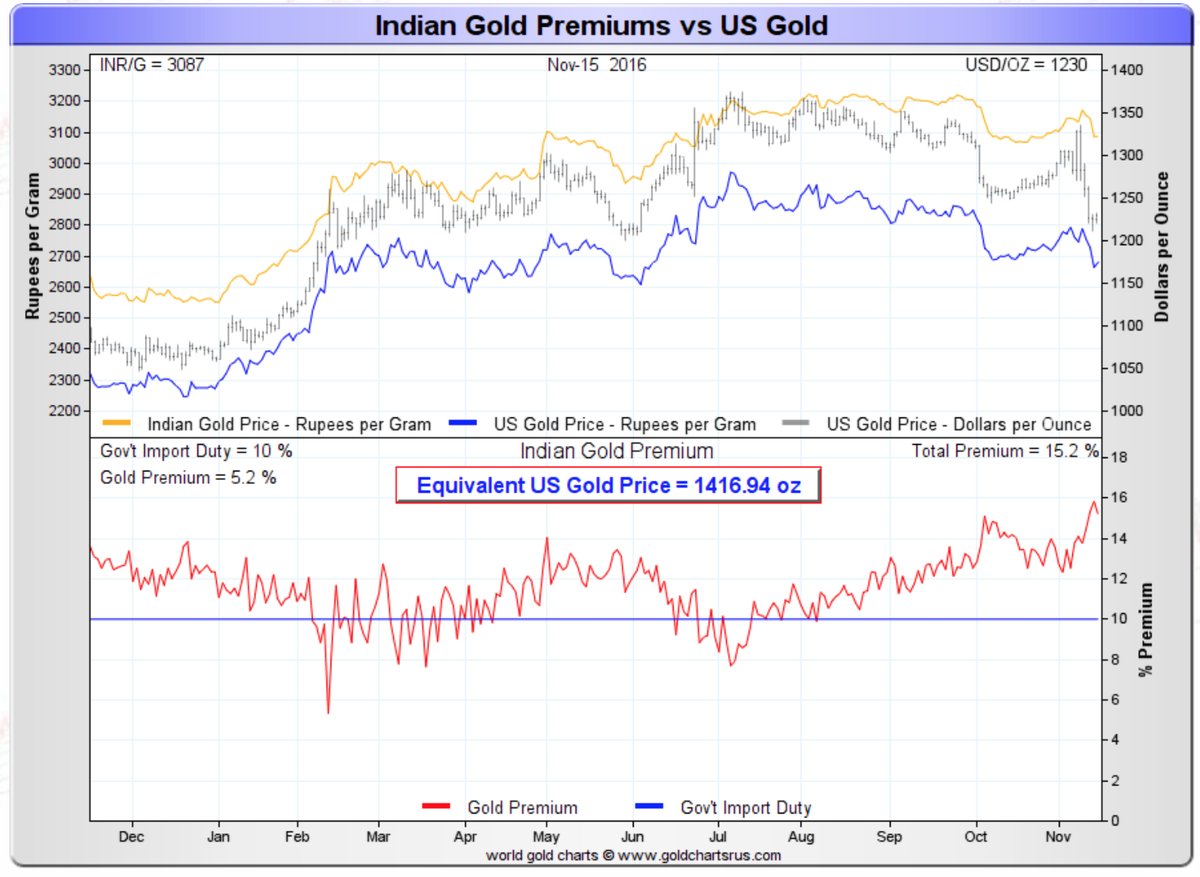 The government demonetised 500 and 1000 rupee notes effective midnight of November 8 and said that holders of old notes could deposit them into banks by December end. The likely decision to advance the date for jewellers stems from some of them selling gold even now against old notes at exorbitant sums, enabling people to get rid of black money while lining their own pockets.

A jeweller said that "black sheep" in the trade were selling 10 gms gold for as much as Rs 50,000 against the extant market price of Rs 30,000. Accepting 500 and 1000 notes, except by certain categories of merchants, is illegal. New notes of Rs 2000 have hit the market and soon Rs 500 new notes will also be available.

Official Business in the gold market has considerably slowed down since the government imposed a 1% excise levy on jewellery in the beginning of the year and subjected sales of above Rs 2 lakh only against PAN card. A 27% rise in the yellow metal's price also dissuaded consumption.

Panic has gripped jewellers from across the country as Social media buzzed with reports of the government proposing to ban gold imports till March and advancing the date for jewellers to deposit demonetised notes. The What's Ap user groups suggest the reason behind the move is to Curb malpractices among certain members of the gold trade of converting black money to gold at hefty premiums.

"These talks are primarily doing the rounds on What's Ap messages among traders and jewellers," said Rajesh Khosla. " Nothing official's out though and we have kept our fingers crossed."

Social media messages have it that against the government allowing other residents to deposit 500 and 1000 notes till December end, jewellers might be asked to do so this Tuesday itself.

Other members of 2500 strong trade body India Bullion & Jewellers Association (IBJA) also confirmed the reports. The social media buzz comes amid raids on jewellers across the country for converting illegal tender through sale of gold at hefty premiums. The government' s objective is to dissuade conversion of black money into gold bars and coins.

Those Declaring black money will be charged a 200% penalty since the government demonetised 500 and 1000 rupee notes effective Tuesday midnight. This has resulted in such constitutents scampering to jewellers and bullion dealers, some of whom are accepting banned tender in exchange for gold bars and coins at hefty premiums.

Jewellers also fear that such a move could over time increase smuggling manifold from the current 100-120 odd tonnes . But, few say that the government which has informally discussed these measures might be in no mood to relent.

Gold is among the top five imported products into the country after crude oil and products, electrical and nuclear equipment etc. However, the previosu and present governments have cracked down on the industry in the past few years by raising customs duty to 10% and imposing an excise on jewellery of 1%. The aim is to dissuade people from investing in physical gold and investing instead in sovereign gold bonds and revamped gold monetisation scheme introduced last year.

India, on average, imports 700-750 tonnes of gold each year and officials like Rajesh Khosla, MD of MMTC Pamp and precious metals consultant Sudheesh Nambiath of GFMS Thomson Reuters foresee a 15-20% decline in the same.