Seeking continued diversification away from the US dollar, central banks absorbed 477.2t of gold in 2014, 17% above 2013’s impressive 409 tonnes, according to World Gold Council. This was particularly evident in the last quarter of 2014, when demand was up 40 percent year-on-year to 119 tonnes, making Q4 (October-December) 2014 the 16th consecutive quarter and 2014, the fifth consecutive year that central banks were net purchasers of gold.

Based on the average price of gold in 2014, central banks probably paid about $19.4 billion. 2014 was the second highest year of central bank net purchases for 50 years, after the 544 tonne addition to global gold reserves reported in 2012, the WGC said in a report.

Russia, with gold reserves of more than 1,200 tons, added 173 tons to its already sizeable stocks. The country has been buying the metal to diversify its foreign reserves and solve problems related to ruble liquidity, central bank Governor Elvira Nabiullina said in an interview with Bloomberg TV this month. Gold accounts for 12 percent of Russian overall reserves.

Kazakhstan and Iraq both bought about 48 tons. Azerbaijan purchased about 10 tons. Iraq has seen its gold reserves triple in a year. 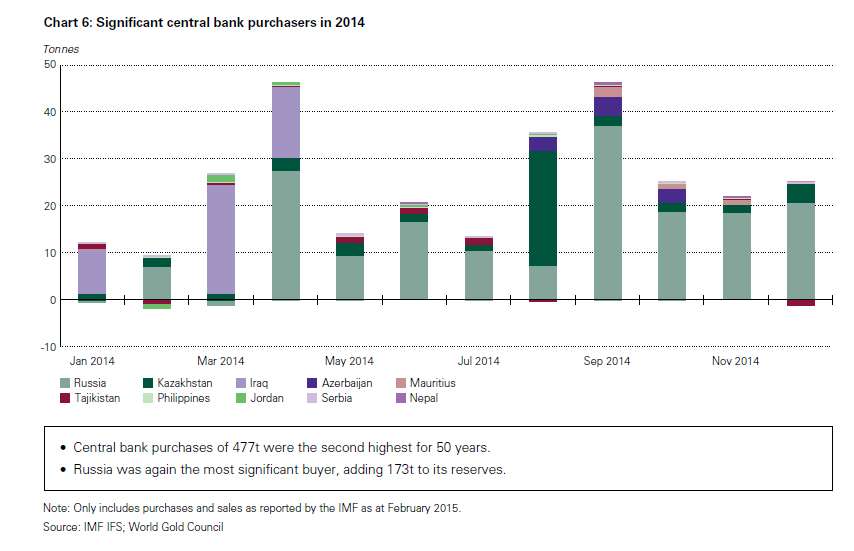 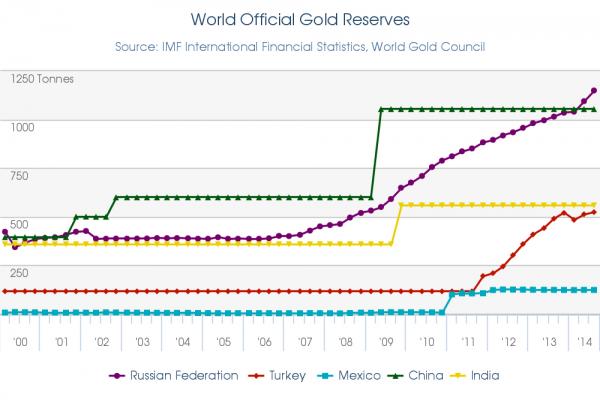 Sales of gold by banks were more limited. Ukraine’s sales of 19 tons was the most sizeable, but pretty understandable, as the current economic situation in Ukraine if forcing the government to sell.

From the WGC: "While purchases continue unabated, sales remained insignificant. Ukraine was the only central bank to significantly decrease gold reserves, falling 44% to 24 tonnes, as well-documented geopolitical struggles impacted economic performance. Further, sales under the Central Bank Gold Agreement (CBGA) were minimal: the final year of the third agreement only saw 6.8 tonnes, while the first year of the fourth agreement8 has seen less than half a tonne sold thus far."

Global gold demand and supply during 2014

Full year gold demand totalled 3,923.7 tonnes in 2014 (from 4,087.6t in 2013). The 4% year-on-year drop was unsurprising as consumer demand was never likely to match the previous year’s record surge. The demand for the strong yellow metal has secured India the top position globally as gold consumer (842.7 tonnes), followed by China (814 tonnes). Combined demand volumes in India and China have grown by 71 percent over the last 10 years.

Total annual supply was virtually unmoved at 4,278.2t. Growth in mine supply was balanced by a decline in recycling volumes to a seven-year low. 2014 saw a stabilisation of the gold market as it pulled back from the extremes of 2013.

"2014 was a year of stabilisation and innovation in the gold market, with annual gold demand down by just 4 percent after the record-breaking level of buying seen in 2013. What's particularly notable about 2014 is that the striking shift in physical gold demand from West to East is now being followed by gold infrastructure development in Asia." Marcus Grubb, managing director of Investment Strategy said.