In a world awash with money-printing, a currency backed by gold would have great credibility. And China – with designs on the yuan becoming the world’s reserve currency – has a lot more gold than anyone else. But how much?

It has been clear for some time that China has designs on the US dollar’s global reserve currency status. For China, this is simply a return to its rightful position on top of the world. To us Western usurpers, the implications of this are just enormous.

Nine in ten central banks are working on digital currencies, according to research by Fintech and IT Benchmarks 2021, but none (except perhaps the Bahamas), are as advanced as China, which has been working on its since at least 2014. Word is, it wants it to be fully functional in time for the Beijing Olympics in 2022. Forget Rishi Sunak’s Britcoin, China is way ahead.

The Wall Street Journal, meanwhile, reports that Chinese broadcaster CGTN has been circulating an animation in English of a man in an American-flag shirt being knocked out by a golden coin with the stamp of the digital yuan. One word stuck out for me from that Wall Street Journal piece – “golden”. Gold is some useless, inert asset, right? Whose heyday was in the 19th century, as irrelevant to modern finance as the horse is to transport?

Today we return to a favourite theme of ours, one that we haven’t looked at since 2019: how much gold does China have?

Just how much gold does China own?

For those with short attention spans who don’t want to read to the end of the article, I’ll cut straight to the chase: China has much more gold than it says it does. In fact, China has more gold than the US. Its enormous gold hoards are all part of its grand global reserve currency status designs.

Right. Time to back up those assertions. Let’s do an audit. Audits involve a lot of numbers – and too many numbers can get a little overwhelming, so I will try to keep them to a mentally-digestible minimum. But let me start with perhaps the contextual figure and anchor that in your minds – US gold holdings. Official records show the US owns some 8,133 tonnes, most of it in Fort Knox. It is the world's largest owner (or so you thought) and gold comprises 77% of its official foreign exchange reserves.

China’s officially declared holdings of 1,948 tonnes make up just 3% of its $3.2trn in foreign exchange holdings, but the real number is much larger than that. China has been the world’s largest gold producer since 2007 –this past decade it has produced about 15% of all the gold mined in the world; last year it produced 380 tonnes – that’s 20% more than the world’s second-largest producer, Australia.

Since 2000, China has mined roughly 6,500 tonnes. More than half of Chinese gold production is state-owned; the China National Gold Group Corporation alone accounts for 20%. Already that official 1,948 figure looks doubtful. Crucially, China keeps the gold it mines –exporting of domestic mine production is not allowed.

With reserves in decline at home, Chinese mining companies have also been buying assets abroad, across Africa, South America and Asia. International production exceeded domestic production by about 15 tonnes last year. As well as being the world’s biggest producer, China is the world’s biggest importer. It is hard to get precise import figures, but we do know that, for example, via Hong Kong alone, over 6,000 tonnes has entered the country since 2000. Add that to cumulative gold production since 2000 and you get a figure of 13,200 tonnes.

Whether imported, mined or recycled, most of the gold that enters China goes through the Shanghai Gold Exchange (SGE), including the gold imported from Hong Kong. So SGE withdrawals – for which we do have numbers – can act as something of an approximation for demand. And it is possible to get numbers for SGE withdrawals: since 2008, roughly 20,000 tonnes have been withdrawn from the SGE.

Then we have to add in gold held in China, whether as bullion or jewellery, prior to 2000. The World Gold Council estimates a figure of 2,500 tonnes in privately-held jewellery. If you add domestic mining and official reserves, you get a figure of around 4,000 tonnes.

Nick Laird of goldchartsrus.com, perhaps the world’s leading gold data expert, has cobbled it all together to produce this chart, showing cumulative gold held in China to be around 28,911 tonnes. I’ve spoken to numerous analysts – Ross Norman, Bron Suchecki and Koos Jansen – and they all arrive at similar estimates. 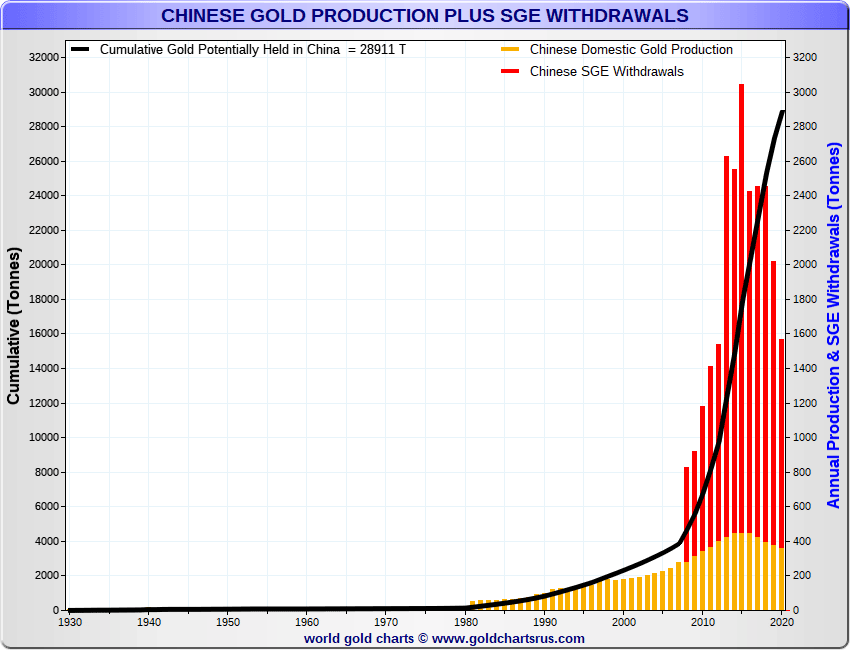 In addition, there is gold entering China that is not accounted for by SGE withdrawals. Norman points out that the People's Bank of China (PBOC), the central bank, likes to buy 12.5kg bars. These do not trade on the SGE. Also, the PBOC often uses dollars on exchanges in London, Dubai and Switzerland, while the SGE sells its gold in yuan. The army, too, owns gold and does not have to declare its purchases.

How much of that huge hoard is state owned? 40%, 50%, 60%? Norman guesses 50%; Suchecki, formerly of the Perth Mint, says 55% (there are many state agencies, on top of the army and the central bank, which buy gold: the State Administration of Foreign Exchange and China Investment Corporation – the sovereign wealth fund – is one).

At 50%, the implication is that China owns roughly 14,500 tonnes. That is 1.8 times more than the US. It may be that only 20% or 30% is state owned – China has been famously encouraging its citizens to buy gold since 2008 and the SGE has actually stated that only consumers buy gold over its exchange. But this almost doesn’t matter.

This encouragement to buy gold, as one reader resident in China reported to me, “kicked off a frenzy of laundry” as China’s citizens rushed to exchange the hoards of hooky cash they had built up. “In my local bank in Shanghai in 2009 I was standing behind a Chinese bloke unloading bundles of euros, US dollars, Singapore dollars and Swiss francs in exchange for five-kilo bars of gold across the counter.”

Gold ownership is registered, so the government knows how much its citizens have. But it’s commonly thought that, should Beijing invite private holders of gold to support a major government currency initiative by pledging their gold as a kind of war bond, then there would be a 99% pick up.

The vast majority of Chinese people trust their government, especially when it comes to returning China to the top of the world. That means a considerable amount of extra gold can very quickly be mobilised to participate in whatever Beijing is planning.

Chinese gold holders do not necessarily share the same mistrust of government held by Western gold bugs – the Party is seen as a good housewife to the nation.

The disruption it would cause means there is no way China can declare such large official holdings. Not yet anyway. There would be an unwanted surge in both the yuan and the gold price. The government's $3.2trn of US dollar foreign exchange reserves would be devalued. To declare so much gold would be a direct challenge to American supremacy, which China is not yet ready for. Parity first, then supremacy.

For now they follow Deng Xiaoping's doctrine of “we must not shine too brightly” until everything is ready. US president Donald Trump wrong-footed the Chinese; that and Covid, the great accelerator, may have brought schedules forward. Chinese president Xi Jinping is known as a “man of destiny” and he may want the great ascension to happen on his watch.

But backing its money, if only in part, with gold, as empires on the rise are wont to do, would give China great credibility in a world awash with money-printing.

That animation of a man in an American-flag shirt being knocked out by a golden coin with the stamp of the digital yuan may not be so fantastic. He who owns the gold makes the rules.