It is absolutely imperative for investors not to worry about the short term irrational moves of markets and not to listen to government figures or central bankers who make political statements that bear no resemblance to their actions.

As I have discussed many times, the currency wars are continuing and in my interview last week I discussed the ECB, BoE making statements that rates would be low for a foreseeable future due to pressures in these economies. The same is of course true for bankrupt Japan. Well the desired effect of weakening European currencies didn’t last long. This week Bernanke basically said the same as last week but the markets reacted differently and he achieved the desired effect of the dollar falling rapidly....

But investors must not listen to the noise and try to interpret every single word that these politicians/central bankers utter. Because there is absolutely no chance whatsoever that they can change the direction of the inevitable. I wrote an article in May 2010 called “Alea lacta Est” (the die is cast). So the die was cast many years ago and there is nothing governments can do today to stop the continued decline of the world economy and the collapse of all major currencies.

Since the creation of the Fed in the US in 1913 (a privately owned central bank set up for the benefit of commercial bankers), all currencies have declined 97-99% in real terms. And real terms, of course, means gold which is the only money that can’t be printed and the only money that has survived for 5,000 years. The century old collapse of paper money is shown clearly in the graph below (courtesy World Gold Council). 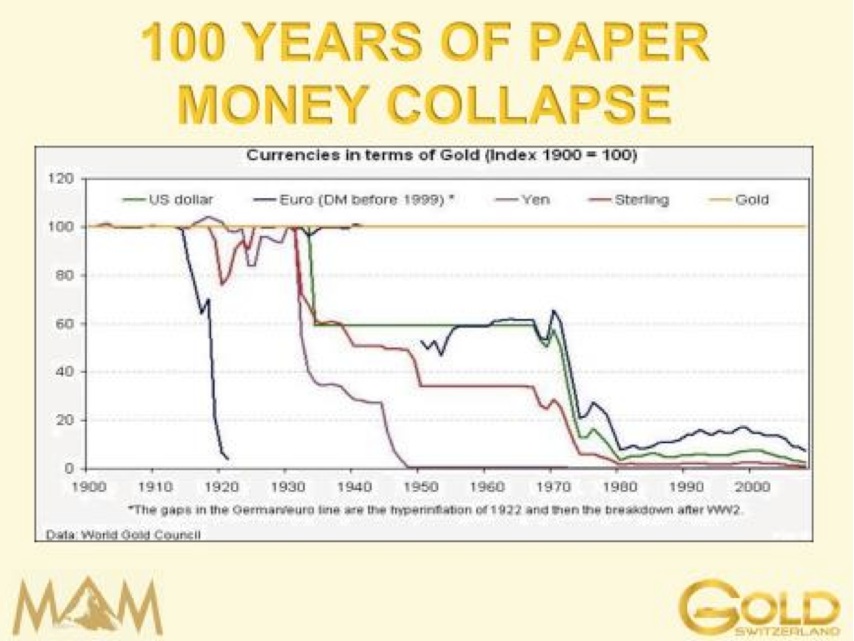 So we only have another 1-3% fall of most currencies in order for them to become totally worthless. That seems very small compared to the fall in the last 100 years. But if we measure from today this will mean a total collapse of the currency system as we know it.

Again, history will tell us that this has happened many times before and the chart below shows how the silver content of the Denarius (silver money) during the Roman Empire declined from almost 100% silver content to 0% from 180 to 300AD. 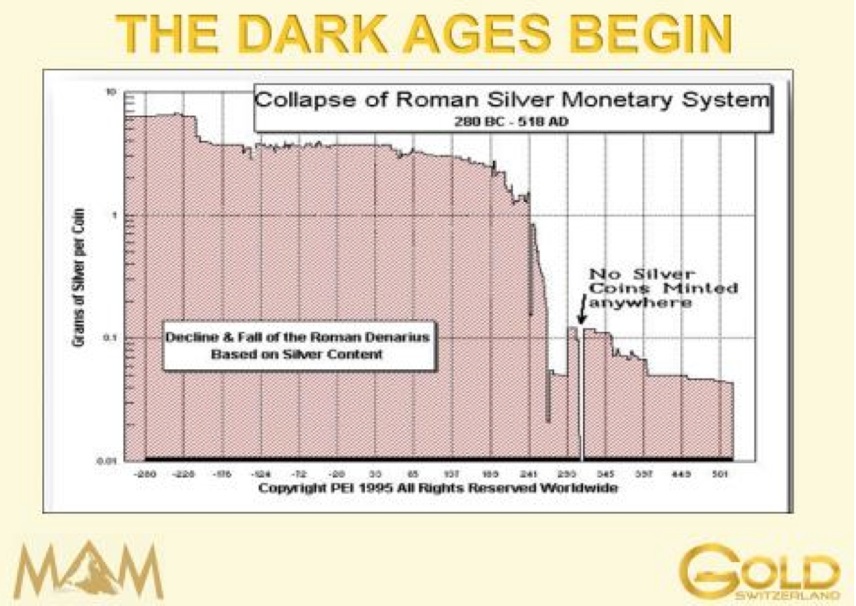 In 180AD just before the final collapse began, Cassius wrote: “Our history now descends from a kingdom of gold to one of iron and rust, as did the affairs of the Romans that day”.

In my opinion 180AD can be compared to 1913 when the decline of the monetary system started. The next few years will just finish off what started in 1913 making paper money totally worthless. But sadly this will result in a decline in the world economy both economically, financially, politically, geopolitically and morally to a degree which will make the world a much less pleasant place to live in - “a kingdom of iron and dust”.

The reason why this historical analogy is so relevant today, is that I believe that all the problems that started in the world in 2008 will now slowly re-emerge starting this coming autumn. Central banks will resume QE in earnest again (as if they had ever stopped) and currencies – especially the US dollar will fall more rapidly. Stock markets will for another few months continue to reflect the money printing and make new highs. This is the typical behavior at the start of a hyperinflationary period. At the end of this rise which is likely to last a few months, stock markets will start a long term major bear trend.

What is also very significant is that the 22 months correction in gold now is likely to have finished. A 21-22 month cycle is typical for gold and whilst the last cycles of this length have been up-moves the one that we have just seen is the end of a major correction before a substantial move to the upside. Just like the dollar acceleration down is likely to start in September, gold’s next major move up will also start then. The up-move in silver is likely to be much faster but with massive volatility.

Or targets for gold have not changed. In excess of $3,000 is still possible in the next 12-18 months. Our long term target of in excess of $10,000 still stands in today’s money. But with hyperinflation we could add many zeros.

So just as I said to a nervous investor on the 28th of June when gold made its low, “today is a time to buy and not to sell”, for anyone that is not already fully invested now is the last time that you can buy gold at bargain prices. But remember it must be physical and stored outside the banking system.

As the currency wars and economic problems get worse in the next few years, physical Gold is one of the few assets that will give investors peace.

The fun for the paper #Gold shorts is now over. Anyone not fully invested in physical #Gold & #Silver has a last chance to load up right now