Every day 5,000 tons of silver and 650 tons of gold are traded in the paper market. This is an astonishing 25% of annual production of each metal that is traded daily. Currently there is clearly intervention to hold down the price of gold and silver at every important level. Like all interventions, this one will fail too. The paper market is massively short and would be incapable of delivering even a small fraction of physical gold or silver against their commitments.

So what we are seeing is a short-term correction in the continuous rise in gold and silver against paper money. The correction is likely to be short-lived and eventually lead to new highs.

But investors should not really be concerned. Gold will continue to reflect the escalating deficits and the never-ending money printing by governments. 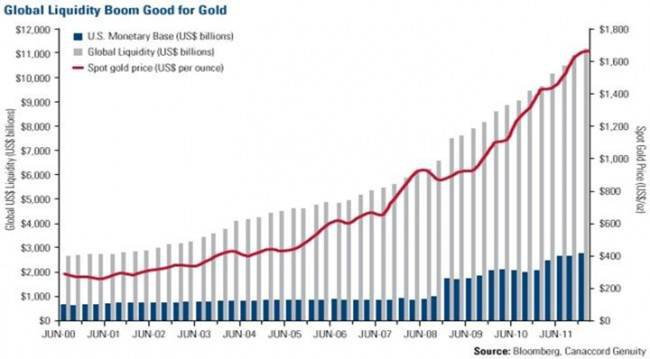 We know that no government is capable of maintaining any serious level of austerity. This will automatically lead to rejection by the voters and loss of power. So governments worldwide will continue to spend money they don’t have and print endless amounts of it. The situation is the same in the US. Neither candidate is capable of taking any measure that will cut the escalating deficits. Since Bernanke became chairman of the Fed in 2006, the Federal Debt has doubled from $8 trillion to $16 trillion! This makes Bernanke the most productive person in history. But this is only the beginning. There is nothing that will change the trend (as shown in the chart above) of rising deficits and rising gold.

We are reminded every day of the fragility of the financial system. The failure of the bigger names (Lehman, MF Global, Sentinel) are well-known but we hear of smaller brokerage houses failing around the world that is not publicised.

In the next few years, many institutions will fail. And it always happens totally unexpectedly. This is why it is absolutely critical to preserve wealth by holding major assets outside of the financial system. Major fortunes will be lost and it will be a question of who loses the least. One of the few assets that will continue to reflect the destruction of paper money is gold. But it must be physical gold only stored outside the banking system in the name of the investor with personal access to the gold.

Switzerland now has two gold initiatives. One of them is to create a Gold Franc which will be accepted as legal tender in parallel with the paper franc. Switzerland has a long-standing tradition in gold both from the point of view of private ownership and refining of gold.  Four of the top six refiners in the world are Swiss. This gold tradition makes it more probable that this initiative is passed by parliament. Initial soundings are positive.  If gold is accepted as a parallel currency, this would eliminate any small risk of confiscation of gold in the future in Switzerland.