Maecenas was a well known benefactor in Rome for Horace and others. His name has come to mean benefactor, in many languages called a mecenate.

The loss of a benefactor can be very serious for anyone on the receiving end of his alimonies. For a century, the world has had the most generous group of benefactors ever. These benefactors have created immense wealth in the world. Even better, they did it without any major effort. All that was required was a printing machine combined with some book keeping wizardry.

The problem is now that these wizards will very soon be revealed as the biggest swindlers in history. With money printing and debt expansion they have created a $2 quadrillion Ponzi scheme of debt, derivatives and unfunded liabilities.

A WORLD OF ILLUSORY WEALTH

Not difficult to understand that I am talking about Governments and Central Banks which have created a world of illusory wealth. A system that grows primarily by expansion of debt rather than hard work and return on investments made from savings has no sound foundation. When the debt implodes, so will most of the assets financed by the debt. Because assets generated by printed money or debt can by definition not be worth anything since the money that created them was free money with ZERO intrinsic value. Money only has a real intrinsic value when it is the result of a service or produced goods. But it has zero value if it is printed or just generated by a book entry. Thus worthless IN and worthless OUT!

And this is what the world will soon experience. The 2006-9 rescue package of around $25 trillion followed by the doubling of global debt from $125 trillion in 2006 to over $250 trillion today, will be the last time for decades or maybe longer that it will be possible to create worthless money out of thin air and con the world into believing that this is real wealth.

MOST RATES FIRST NEGATIVE AND LATER THEY WILL REACH INFINITY

The next round of stimulus in the form of money printing, interest rate manipulation or free money, debt expansion and deficit spending will definitely not work. The world economy is now at the end of the road and any debt added today, even if free or with negative interest will have zero effect. The $100s of trillions of debt likely to be printed in the next few years will trigger the collapse of the debt mountain by its sheer weight. And the current historical super bubble in bond prices will implode with bonds collapsing and interest rates going to the teens initially like in the 1970s to early 80s. Eventually a major part of the bond market will default and rates reach infinity. But before that we might have a couple of years of zero or negative rates as central banks fight to keep the financial system afloat.

When that happens, the money printing will already have created hyperinflation and the collapse of the currencies which I discussed in last week’s article.

In the medium term, the current $15 trillion of debt with negative interest is likely to get much bigger. The implications are both crazy and mind boggling. In Switzerland for example, insurance companies now offer 10 year mortgages at 0.64%. And just look at the 100 year Austrian bond yielding 0.8%. It must prove to be one of the worst investments ever as bond prices and currencies collapse. 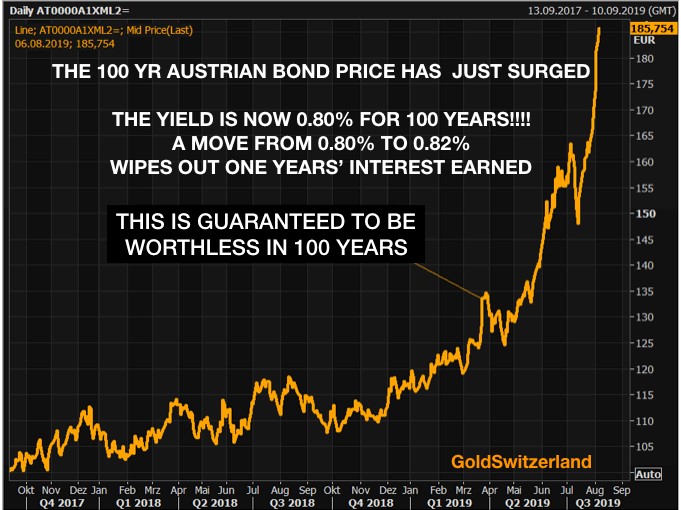 So the $100s of trillions of wealth that has been created in the world, since the birth of the Fed in 1913, have led investors to believe that buy and hold is the most fantastic method of investment since markets always go up. Well, they have been right of course since virtually everyone who has tried to time the market will have made less money.

But the benefactors (governments and central banks) of the investment markets will after 100 years of success, become totally ineffective by applying the same old methods. And sadly without Deus ex Machina, which is unlikely, there is no other solution. Deus ex Machina was when god was lowered down on the stage in the ancient Greek plays, to solve all the problems.

STOCK INVESTORS WILL BUY THE DIPS THE WHOLE WAY DOWN

Investors will of course be unperturbed by the coming falls and continue to buy the dips the whole way down. Technically, it seems quite clear that the small countertrend rally we are now seeing is the preamble to a crash that could start within one to a few weeks from now. And that will be the mere beginning of a secular bear market that will last several years and potentially reach the levels in the graph below. 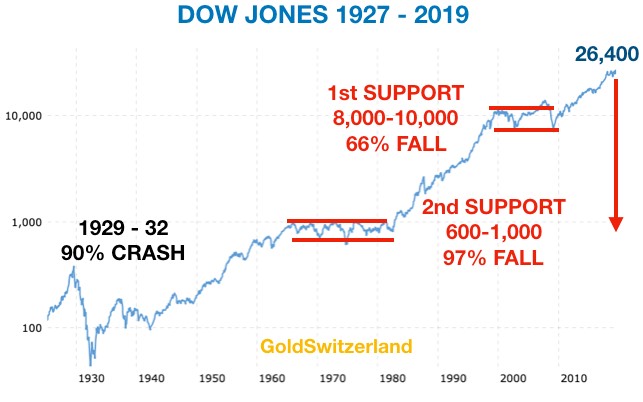 Most investors will do what all investors have done in the last 100 years namely, buy the dips or just sit tight. Once the market goes down 20-30% or more, only a few will get out but the majority will stay in to the bottom. Some will set levels higher up to get out but those levels will rarely be reached and so they will ride the market all the way down until it has lost 90% or more.

We must remember that a market only needs one seller and no buyer to go to zero. Markets crash on marginal selling and therefore don’t require a big volume of sales to fall dramatically.

For the few intelligent investors who get out of the stocks and bonds as they crash, there are very few alternatives. Cash will be totally debased by the competitive devaluation which is now accelerating. The areas likely to do well in the coming years will be defence, security, forestry, food, natural resources and precious metals of course.

FUTURE GOLD DEMAND CAN ONLY BE MET AT MUCH HIGHER PRICES

Non government physical gold investment is approximately 0.5% of global financial assets which are $260 trillion. So 0.5% is $1.3 trillion which is 28,000 tonnes of gold. Total annual mine production of gold is 3,000 tonnes. So if investment gold ownership doubled to 1%, it would require 9 years of gold production at current prices.

There are of course many variables which will change in this equation. Gold will go up in price rapidly and world financial assets will decline fast. So the amount of gold required would be a lot lower. But let’s assume that it is only half which is 14,000 tonnes and 4.5 years’ production. That amount will of course not be possible to buy either, especially since the whole paper gold market will explode and create massive demand for physical that cannot be fulfilled.

So it is clear that only a minuscule reallocation of global assets into physical gold would put enormous upward pressure on the gold price. Thus, it would be impossible for institutions to make any meaningful investment into gold at current levels. As the gold price rises rapidly, it is likely that an institution which intends to allocate say $1 billion into gold will not get 21 tonnes at $1,500 but instead 2.1 tonnes for its $1B at a price of $15,000. This means that the coming gold demand can only be met at much higher gold prices and smaller quantities.

It is still possible to buy physical gold in bigger quantities but I don’t expect that window to stay open for very long. At some not too distant point, it will be very difficult to buy any major quantities of gold. There will be long delivery delays and refiners will not be prepared to fix the price until they have the gold in stock. This for two principal reasons. Firstly, the paper market will not function properly or at all. Thus, refiners wouldn’t take the risk of hedging themselves in that market. Secondly, as the price is rising, refiners will only sell physical when they actually have it in order to maximise profits.

Anyone intending to buy gold in big quantities has a very small window currently when that is still possible. Very few institutions will realise this until it is too late. Also buyers of smaller quantities of gold will have problems to get hold of gold at reasonable prices or margin as the price of gold moves up rapidly.

What I say about gold above is even more relevant for silver. Silver is a very small market that has been suppressed for years. It is now on the verge of breaking out and once it does, the price will move very rapidly and it will become extremely difficult to get hold of physical silver.

I emphasise physical metals because anyone who buys paper metals is unlikely to ever get delivery or be paid out.

For all the gold bears and doubters, have a look at the chart below. We have had so far a 20 year bull market in gold and just broken out of a long correction. A chart cannot look more bullish than this one. There is no doubt that gold in dollars will soon make new highs past the $1,920 high in 2011. We must remember that gold has already made new highs in dozens of currencies, including British pounds, Canadian and Australian dollars, Swedish and Norwegian kroner and many more. The break of the Maginot Line at $1,350 was the last obstacle for gold. The old high at $1,920 will be blown away easily. 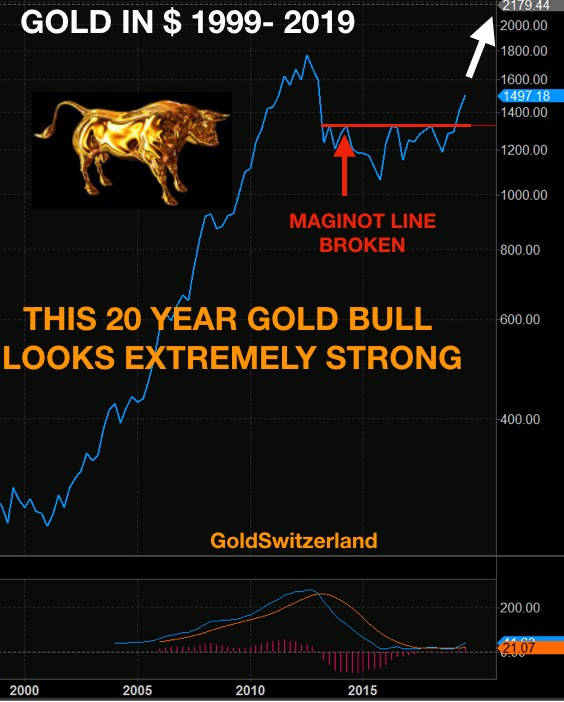 In my recent articles I have stressed the urgency of getting out of bubble assets like stocks and bonds and to own physical metals. I see the next phase in markets starting very soon, whether that is in a few days or a few weeks. Next phase means stock market crash and precious metals surge.

What is going to happen in markets this autumn or sooner will shock the world. The fall in stocks will be violent and fast. Most investors will be paralysed hoping it is all temporary. 100 years of money printing and credit creation has made investors complacent believing that markets go up for ever. As asset prices fall and debt markets collapse, we will see the biggest wealth destruction in history.

The risk is here now and it can start at any time. There is no time to think or procrastinate. If you act now, you have a chance to protect your assets and not be one who loses assets accumulated over decades in a flash.

The very few who own gold or silver as protection against the coming catastrophe will definitely sleep better.