Central Banking's Gold for Central Banking 2020 survey questionnaire was distributed in August 2020 and received responses from 26 central banks around the world. Those who participated did so on the condition that neither their names nor those of their central banks were mentioned.

Here is the classification and geography of the banks surveyed:

What are the most relevant issues in determining gold safekeeping for central banks? 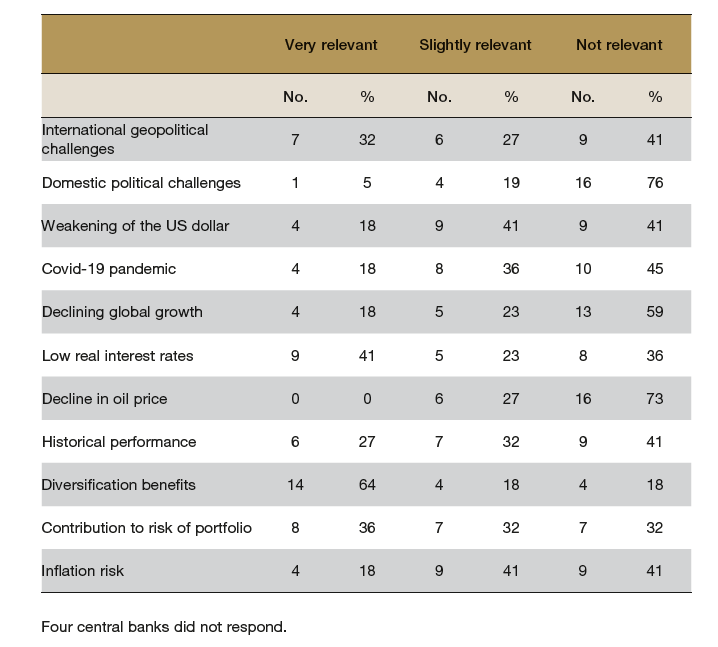 The "diversification benefits" of gold is therefore the most relevant factor for central banks in determining their institution's gold holdings.

The Covid‐19 outbreak has not changed how central banks see gold. This was the view of just over three‐quarters of respondents, responsible for $2 trillion in reserves.

How will the gold reserves of the world's central banks evolve over the next twelve months?

Does your central bank have a target allocation for gold? 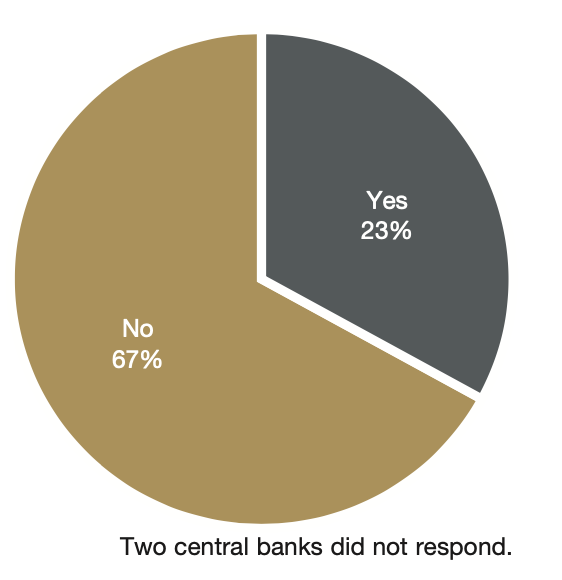 Maintaining a target allocation for gold is a minority activity among central banks, though somewhat higher among gold holders. One‐third of respondents – responsible for $680 billion – said they had a target allocation for gold. All but one of these eight central banks were gold holders. However, narrowing the sample to holders of gold only increases the percentage to 39%.

The practice was most common among central banks in middle‐income countries, almost half of which said they had a target allocation. In contrast, this was the case in only two of the 12 high‐income countries.

If yes, what percentage of your total reserves portfolio do you allocate to gold?

Twelve central banks did not respond. Of those that responded, two did not explicitly say they had a target allocation. One central bank selected two ranges for its answer.

How does your central bank buy and sell gold? 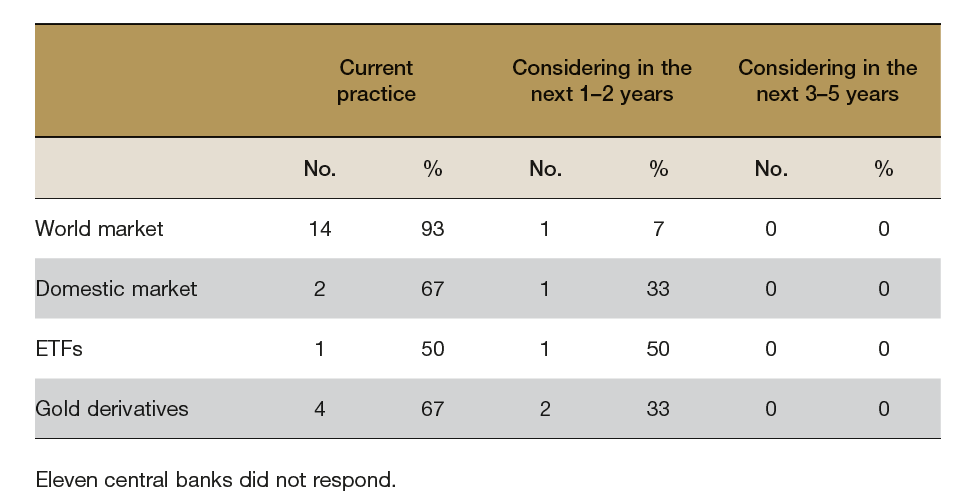 Transacting in the global market is by far the most prevalent means of buying and selling gold.

Where does your institution store its physical gold holdings?

Twenty-one central banks responded and eight of them chose more than one option.

How much of your gold is held abroad?

Seven central banks said they stored more than three‐quarters of their holdings abroad. These seven were also smaller holders, with an average of $1.4 billion in gold, though two were overall very large reserve holders. Nine central banks did not respond.

Approximately 75% of respondents reported that the Covid-19 outbreak would not change how their institutions viewed gold, with many noting the commodity was an elemental part of their portfolios.

Most central banks still prefer to buy and sell gold in the global cash market, rather than using domestic gold or derivatives markets. Interest in gold ETFs is on the rise, but most central banks remain in an exploratory mode, with many reporting liquidity considerations as an important factor, and some indicating concern about whether a gold ETF was as ‘safe’ as gold itself is perceived to be.

The use of ETFs by central banks is likely to increase over time, not least because fears that ETFs might offer artificial or illusory liquidity in excess of the liquidity of underlying assets. ETFs may also be useful as a less politically sensitive way to buy and sell gold, without the direct political symbolism of ‘selling the crown jewels’ or national ‘family silver’. A combination of the quality of physical gold as a hedge against the US dollar and the profitability of ETFs is likely to be adopted by the majority of future players.

Overseas gold holdings with other central banks remains the preferred holding strategy, used by 80% of respondents. In fact, there is unanimous agreement that the court decision supporting the Bank of England in holding the gold of the Central Bank of Venezuela against its wishes has had no impact on decisions about where and how central banks hold their gold.

Some central banks have nevertheless repatriated physical gold in some cases due to geopolitical risks. This mistrust comes rather from the banking institutions of Central and Eastern Europe, as well as from the Eurasian axis in general, as we pointed out in a previous article.