Strategic investments are made for the long run and with no intent of short term gains or concern of short term fluctuations. This kind of investing is based on buying undervalued and unloved assets and holding them for a very long term. This is what we did with gold in early 2002 for our investors and ourselves.

Having come down from $850 in 1980, not only did gold represent incredible value at $300 in 2002, but it was also the best insurance possible against a financial system which was turning increasingly unsound. Sixteen years later we are still sitting on our gold. We have seen a high of $1,920 in 2011 and a low of $1,050 in 2015. Have we ever been tempted to sell the gold? No, not for one second. We would rather buy more than sell an ounce.

We will patiently hold the gold until one or more of the following events have happened:

We would never sell gold just because it reaches a certain price. Nobody knows today the level gold will reach. Will it be $10,000, $100,000 or $100 trillion. That depends on the amount of money that will be printed in the next few years. The nominal value of gold at that point is irrelevant. It is only the purchasing power that counts. When the crisis peaks, so will the gold price, although there will be some time lag. At that point it serves no point of course to sell the gold since the financial system will be on its knees. But it could make sense to swap some gold against safe high yielding assets at a bargain price or even against sound businesses that have survived the crisis and can be picked up for a song. There will be plenty of bargains around at that time.

It is these opportunities that investors should now prepare for. Sell your Tesla shares, Amazons , Facebooks and your government bonds and buy gold and then wait. The next 5-10 years will give us opportunities that only happen once every few hundred years. And due to the massive debt and asset bubbles we are in today, this time the bargains are likely to be greater than any time in history.

Sadly, only a fraction of 1% of the investment population can see this opportunity. But Remember the Golden Rule: “Whoever holds the gold makes the rules.”

THIS TIME IT WILL BE DIFFERENT

Most investors will hold on to their bubble assets until they have declined by 85-100%. They will again believe that central banks will save them. But this time it will really be different although nobody can see that, until it is too late. The transfer of wealth in coming years will be of a magnitude that few can realise today. Most billionaires will disappear and not understand what has happened. They all thought it it was their own ability that created their wealth. They will soon become aware that their wealth was based on the central bank money printing bonanza that favoured a few and impoverished not just the poor but also the middle classes. But when bubbles burst, debts implode and so do asset values.

Many ask how we can have hyperinflation when so many assets will implode which is deflationary. As I have explained before, we will have “FLATION” in coming years. This means both deflation, stagflation, inflation and hyperinflation simultaneously.

All bubble assets will deflate and the economy will have deflation which is inflation with economic stagnation. Consumer products, foods, raw materials and many commodities will hyperinflate. Most people don’t understand that we can have hyperinflation without high demand. Just look at Venezuela to understand how this is possible.

Venezuela’s economy is totally collapsing with most people living in absolute poverty and squalor. There is very little demand for products or even food since there is none and people can’t afford it. Still prices are going up exponentially. This has nothing to do with demand but with the currency. Hyperinflation is a currency event and when a country prints unlimited amounts of money the currency collapses. And this is what creates hyperinflation.

FROM IMMORALITY TO MORALITY IS A LONG ROAD

We live in a world where real values and morals have been replaced by instant gratification and worship of the golden calf. Loyalty and friendships are gone, instead it is everyone for himself and win-lose rather than win-win. This is what happens in an unsound and immoral economy manipulated by an elite. The next phase that the world will go through will eradicate this system which is rotten in its core. After a long period of very unpleasant transition, real moral and ethical values will return. But before that, there will unfortunately be a lot of suffering in the world.

GOLD HAS BROKEN OUT IN MANY CURRENCIES

For holders of gold and silver who are impatient, I don’t think we are far from the next major move up. The problem with looking at gold in just US dollars is that it doesn’t give the full picture. Gold must be measured in the home currency of the holder.

Just look at the charts below. Gold in Swiss francs has broken out and is in a clear uptrend to new highs. And gold in Swedish kronor is near the 2012 highs. So is gold in Canadian and Australian dollars. Gold in US dollars and other currencies will follow soon. 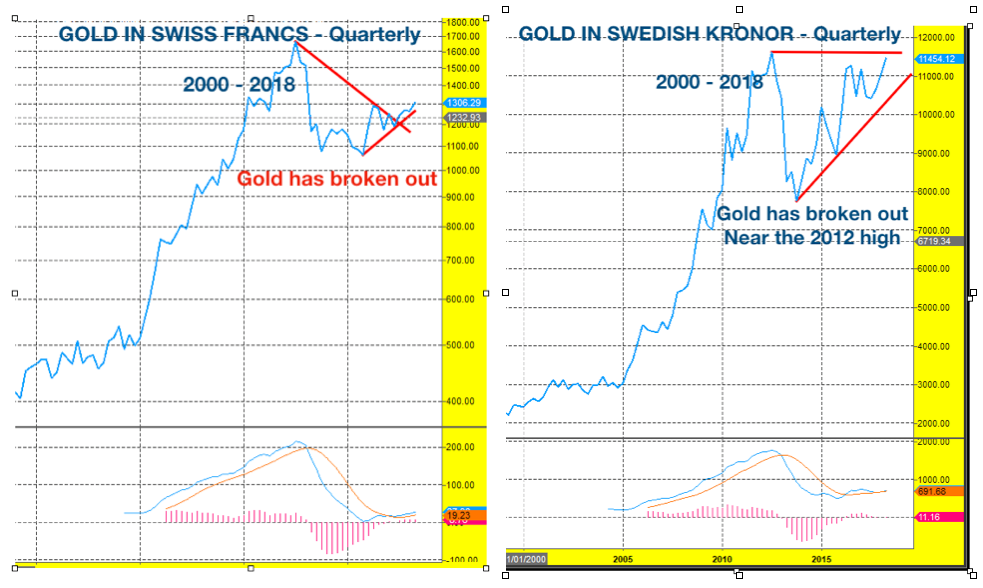 Looking at gold in the weak South American economies, we can see the effect of collapsing currencies and the resulting hyperinflation.

The gold charts for Dollars, Euros, Pounds and Yen will look the same as the two charts above, in a few years time. Take my word for it. All these countries will have unlimited money printing and hyperinflation.