Gold & Silver Slammed At Comex Open: Something Bad Is Coming

This is starting to smell a lot like 2008. By nearly all private sector reported economic data series, the economy is starting to tank hard. Just today the employment component index of the NY ISM manufacturing report plunged at its fastest pace in history and hit a 7-yr low. A bevy of private sector reports yesterday showed similar trends. Most notably construction spending fell in August – vs. a .7% gain expected. It was the second month in row construction spending declined after a big downward revision pushed July into a decline vs. June. Construction spending is now contracting for the first time in 5 years.

But there’s an even bigger problem to throw in the mix. It’s called “Deutsche Bank.” Despite inexorable pleas to the market by CEO, John Cryan, DB is exhibiting ALL of the characteristics displayed by Lehman in the months leading up to Lehman’s collapse. If DB were forced to undergo an independent – and by independent I mean non-Central Bank, impartial outside third party – audit and a bona fide mark to market of its off-balance sheet “assets,” the bank would be catastrophically insolvent. As it is now, the stock market values DB stock at just 26% of DB’s stated “book value.” It’s true book value is likely negative by at least few $100 billion.

Just for the record, I did “back-of-the-envelope” mark to market analysis on the balance sheets of Lehman, JP Morgan, Washington Mutual and Wells Fargo at the beginning of 2008. This was before I had a blog but I had shared my work with Bill “Midas” Murphy’s Le Metropole Cafe. My work showed that each one of those banks were hopelessly insolvent if accurate mark-to-market accounting would have been enforced on those banks by the regulators. Wash Mutual and Lehman collapsed that year. JP Morgan and Wells Fargo also would have collapsed if the Government had not ripped over $800 billion away from taxpayers and gave it to the big Wall Street banks plus Warren Buffet’s bank.

Deutsche Bank is at least as underwater as each of those banks – and probably more underwater than Lehman and Wash Mutual combined. If the western Central Banks can’t find all of the hidden skeletons in DB’s derivatives closet and clandestinely monetize them, DB will collapse.

Gold is being taken down just like it was in 2008 ahead of some type of systemic disaster coming at us. Gold hit $1020 in March 2008 just as Bear Stearns was collapsing. It was taken down even more during the summer, ahead of Lehman’s collapse. These events should have pushed gold over $2000 back then. Gold eventually almost did hit $2000 by late 2011. The same price management effort is being implemented now and the elitists will do their best to keep gold from broadcasting a loud warning signal to the markets that something is wrong.

Unfortunately, if the masses were allowed to see gold’s “canary” die in the “coal mine” behind the elitists’ “curtain,” it would enable the ones paying attention to get their money out of banks and other monetary custodians before their money is vaporized by whatever financial hurricane is brewing.

Today gold was smashed right when the Comex floor opened. This is standard operating procedure: 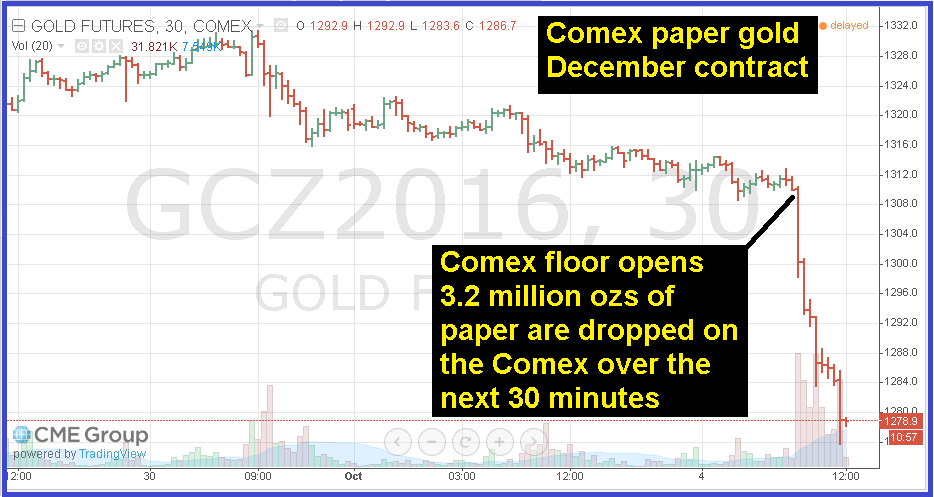 In the first 30 minutes of Comex floor trading, 3.2 million ounces of paper gold “bombs” were dropped on the Comex. Currently the Comex is showing that 2.5 million ozs of gold have been made available in Comex custodial vaults for delivery. Naked short-selling of futures contracts this extreme only occurs in the gold and silver markets. If selling of this magnitude relative the amount of underlying available for delivery occurred in any other commodity, the CFTC would immediately investigate. Not so in gold because the CFTC is part of the elitist team that is charged with price management of gold.

The common “muscle” reaction to a day when gold, silver and the mining stocks are down as much they are now is to sell and run. But this is the wrong reaction. If you want to do something to try and protect what’s your’s, days like today are when money should be removed from banks – especially Deutsche Bank – and moved into the precious metals sector. This may not be the bottom – but it’s close enough for Government work. If you liked mining stocks in early August when the HUI index hit 284 , you should love them now with the HUI at its 200 dma. The HUI has nearly completed a 200 day moving average correction. It might go lower from here but you’ll never pick the bottom.