We have recently had some significant news about the sovereign gold market that makes the unclarity even more unclear. Central banks and the BIS in Basel go to great length to tell the world absolutely nothing about their gold dealings. All transactions are carried out covertly and no central bank ever has an official audit of their gold holdings. The last US audit was during Eisenhower’s days in the 1950’s. Ron Paul has been pushing for an audit but to no avail. Will Trump instigate an audit? Well, he might have the intention but when he finds out that a major part of the US 8,000 tons of gold is not there, it will all go quiet. There have been pressures for audits in France and Germany in later years but this has had no effect. No country wants to reveal that the gold isn’t there.

Germany has recently pretended that they are totally open about their gold dealings, but what have they actually told the world?

In 2013 Germany announced a plan to repatriate 674 tons of gold from the US and France. In the first year, they only received 37 tons back and were told that they would have the rest in 2020. We have now been informed that the programme has been accelerated. Out of the 3,381 tons that Germany owns, 51% or 1,713 tons will be in Germany by the end of 2017. Over 49% of the German gold will remain abroad with 1,236 tons still in New York and 432 tons in London.

You wonder why it needs to take five years to repatriate 674 tons. Listening to interviews with the chiefs of the Deutsche Bundesbank, they explained what a major logistical exercise it has been. According to the Bundesbank, they have had major problems with transport, insurance, security etc. If we take Switzerland as an example, we both receive and export over 2,000 tons of gold annually. And that excludes major transfers between banks and to private vaults. The same happens in countries like the UK, China, India and the US. So around the world, many 1,000s of tons of gold are shipped annually without any logistical problem. You wonder then why the normally very efficient Germans have problems to ship 674 tons over five years?

The reason is of course that the gold wasn’t available because it had been leased or maybe even sold. This is confirmed by comments that the bars received in return were not the same as the original ones.

But the big question is now if the 1,668 tons that remain in the US and France actually exist? If they do, why not bring them back to Germany? Originally the reason for holding gold outside of Germany was the cold war. But it would be hard to explain how gold in the UK and France avoided the cold war. Currently there is no cold war so that is not a valid reason. We know of course why the gold originally was held in New York and London because that is where the majority of the gold trading takes place.

But major central banks like the Bundesbank don’t need to move the gold if they lease it. Anyone trading with these Central Banks believes they are creditworthy. Our view is of course different. Central banks hold toxic debt that will never be repaid and therefore they are not safe.

Bullion Banks will hypothecate the same gold many times

So why is the gold not in Germany? Initially it was used for leasing and trading. In the past when gold was leased, it was kept within the London or New York bank pools and just shuffled between the banks. But now it is very different because the buyers are mainly China, India and Russia. And these countries are not interested in paper trading. They want the physical bars delivered. The effect of this is that when a Central Bank leases the gold to a bullion bank, the bank then sells the gold to China and China will of course take delivery. All Central Banks now have is an IOU from the trading bank. When the Central Bank asks for its gold back, it won’t be there and the trading bank will need to borrow gold from someone else like a client. So the bullion banks will hypothecate the same gold many times. That is why investors must never store gold in a bank.

Central Banks don’t just lease their gold to the market. They most probably also sell gold covertly. Total Central Bank holdings are 33,000 tons. Of that Western Central Banks hold around 23,000 tons of gold including the IMF holding. No one knows how much of that gold actually remains in the West. 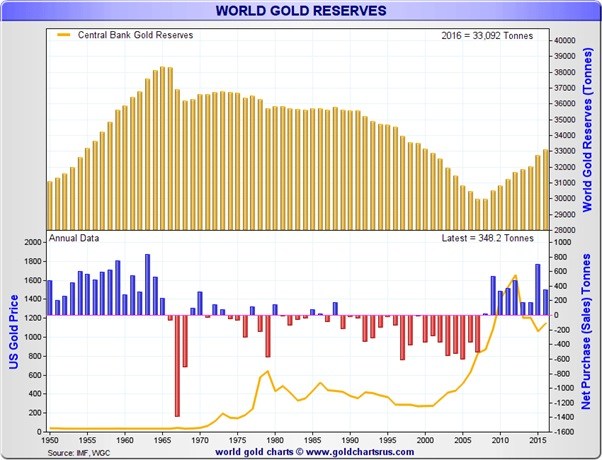 Is half Germany’s gold in China?

If we look at the purchases of the “Silk Road” (India, Turkey, Russia and China), we see that since 2009 these countries have bought almost 20,000 tons. That is just under 3,000 tons annually which is more than mine production during these years. So just four countries have absorbed annual mine production in the last 7 years. In addition, there has been substantial buying by other countries and by investors. It would not have been surprising if a major part of the supply covertly has come from Central Bank activities. 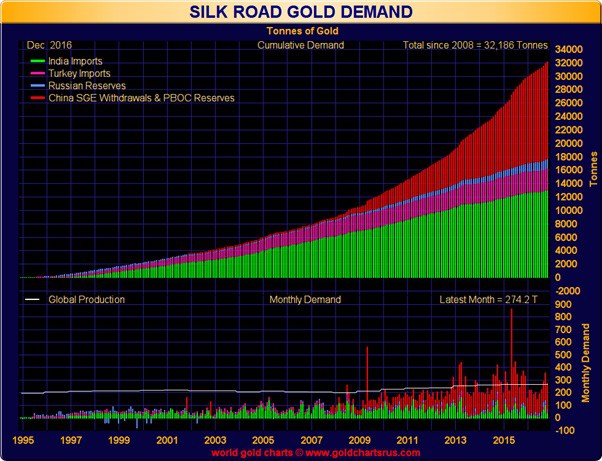 Approximately 4,500 tons of gold is refined every year. Of that 3,000 tons is mine production and 1,500 scrap gold. Since 2011 when gold made a peak of $1,920, there seems to have been little interest and demand for physical gold, especially judging from the price decline. But that is certainly not the case. During the last 6 years, 4,000-4,500 tons have been refined annually and all of that has been absorbed by the market. There are no stock piles of gold anywhere.

Therefore, the price decline from the $1,920 top in 2011 to the bottom $1,050 low in December 2015 has nothing to do with a decline in physical demand. As most gold investors know, the gold price is not determined in the physical market, the size of which dwarfs the paper trading. And it is in the paper market where that sustained price manipulation takes place. I have discussed many times that the gold paper market as it exists today is unlikely to survive for very much longer. When the holders of paper gold realise that there is no gold to settle their paper claims, the gold price will go up not only by $100s but probably also $1,000s in a very short time.

Until then investors are continuing to buy paper gold and also ETF gold. Some ETFs are gold backed but the problem is that ETFs are within the financial system and it is impossible to know how many times the same gold has been used or counted. Gold that is bought for wealth preservation purposes should not be held within the banking system. 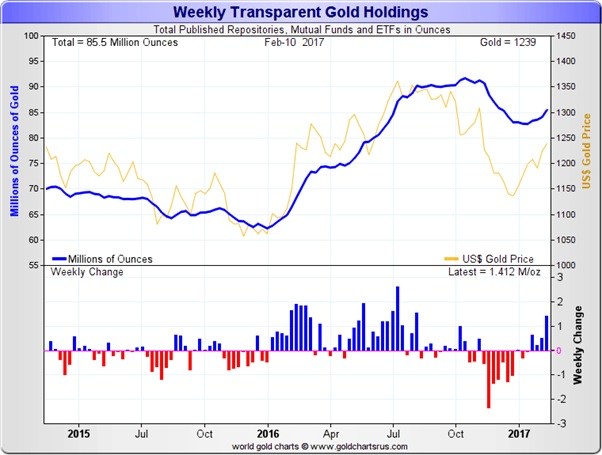 As the fear within the financial system increases, a major part of the ETF gold will be transferred to private ownership and vaults. A few companies, like ours, who operate outside the banking system, can offer physical gold at the same cost as an ETF with direct ownership of insured, individually owned, bars and with instant liquidity.

Switzerland – a strategic hub for gold

It is of vital importance to store gold in a safe jurisdiction. There were fears of Switzerland not being safe after the US authorities attack on UBS due to undeclared US accounts. Many thought that a lot of the gold held in Switzerland would move to Singapore. We offer vaulting in both places but have seen very little migration from Switzerland to Singapore or other places. Many investors are concerned about the risk of confiscation in several countries. My personal view is that gold ownership today is so widespread that confiscation is not practical. It is much easier to tax assets like gold than to confiscate them. Generally, taxes are likely to increase substantially in coming years, especially for the wealthy. Therefore, tax planning is as important as investment planning.

It is imperative to store gold in a country that has a tradition in owning gold. The Swiss have for a very long time saved money in gold. Every month they would buy the Swiss 20Fr gold coin called ‘Vreneli‘.

Also, the one factor that few people understand about Switzerland is the strategic importance of the Swiss gold refiners. Switzerland refines more gold than any country in the world and around 2/3rds of the global annual mine production. Gold is also a very important export item for Switzerland. In 2016, gold exports accounted for as much as 29% of the total Swiss exports or 86 billion Swiss Francs (today US$ 86 billion). For this reason alone, Switzerland will never kill the goose that lays the golden egg.

Thus, I can never see gold confiscation in Switzerland. Instead, I believe that Switzerland will become an even more important gold hub than it is today both for storing and trading gold. In addition to the bank vaults (where gold should not be stored), there are now many private gold vaults in Switzerland with considerable capacity. There are also very big mountain vaults in the Swiss Alps. Some of these keep a very low profile and are not advertised.

Finally, the precious metals have now entered a very important phase in this bull market. As paper money continues to be debased, gold and silver will soon start reflecting all the risks in the world economy and the financial system.

US chronic trade deficit will lead to dollar collapse 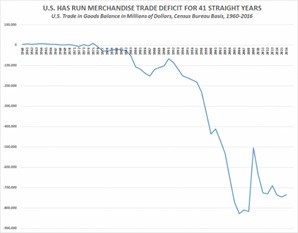 Looking at the US dollar, the 41-year chronic trade deficit is sufficient to take the dollar to zero. Once the dollar loses its reserve currency status, there is nothing that can save it. This makes it critical to shift dollar holdings into gold and silver.

The tight supply situation for the precious metals, combined with the paper market imploding, will lead to major price rises in coming years. We are now at a point where investors can still acquire physical gold and silver at extremely advantageous prices. As severe shortages occur, this will no longer be possible. The ultimate wealth insurance against the numerous global risks is physical gold and silver. An investor just needs to store it safely and leave it there without ever looking at the price movements. Then some day, a few years later, the investor will be astounded at the exponential increase in value of his precious metals when valued in fiat money.