In a time when institutions are increasingly shifting away from fiat currency and looking toward cryptos, it is worth recalling that at least when it comes to central banks, there is no digital gold. There is just gold.

To be sure, in a time of unprecedented economic and social turmoil, central bankers’ appetite for gold continues to grow, providing a bright spot for the traditional haven as investor interest ebbs. According to the World Gold Council, global reserves expanded 333.2 tons in the first half of 2021, 39% higher than the five-year average for the period. Strong purchases by Thailand, Hungary and Brazil stood out, with WGC analyst Louise Street predicting that If central banks continue to buy gold at the levels seen recently, it will provide a supportive element for the market. 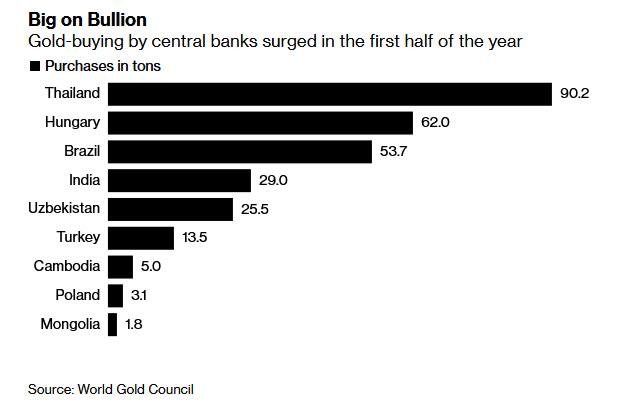 Alas, the past year has not been kind to gold and after rising above $2000 during the hyper-print phase of the covid pandemic, gold has steadily declined to the mid $1700s as a global surge in inflation has forced central banks to restart monetary tightening.

However, for at least one central bank gold's continued decline is welcome news, because according to Poland's Gazeta Wroclawska, Governor Adam Glapinski - the head of the country's central bank, the National Bank of Poland - plans to increase gold reserves by 100 tons next year to strengthen country’s financial stability.

In the interview, Glapinski said his plan may take effect when he will be re- elected as Governor as his current term ends in mid-2022. However, in the same interview, the governor also said he plans to introduce 1,000 zloty banknote, an indication that the gold may be coming only to offset even more money printing down the line.

No matter his intentions, however, Glapinski has been good for Poland's gold reserves: during his term, the amount of gold in reserves has more than doubled to 229 metric tons.