Russia has overtaken China to become the world’s fifth largest official sector holder of gold as Western sanctions drove buying by its central bank to record highs in 2018, its data showed on Friday.

With support from President Vladimir Putin, the central bank has been betting heavily on bullion, often seen as a safe haven or a natural hedge against the dollar, with active purchases in the last 10 years.

In 2018, Russia’s buying jumped further as holdings of U.S. Treasury securities were reduced after Washington imposed sanctions on Russian entities in April, the toughest since Moscow’s 2014 annexation of Crimea from Ukraine.

As of Jan. 1 this year, the central bank held 67.9 million ounces of gold, up from 59.1 million ounces at the start of 2018, making it the world’s fifth largest holder behind the United States, Germany, France and Italy. 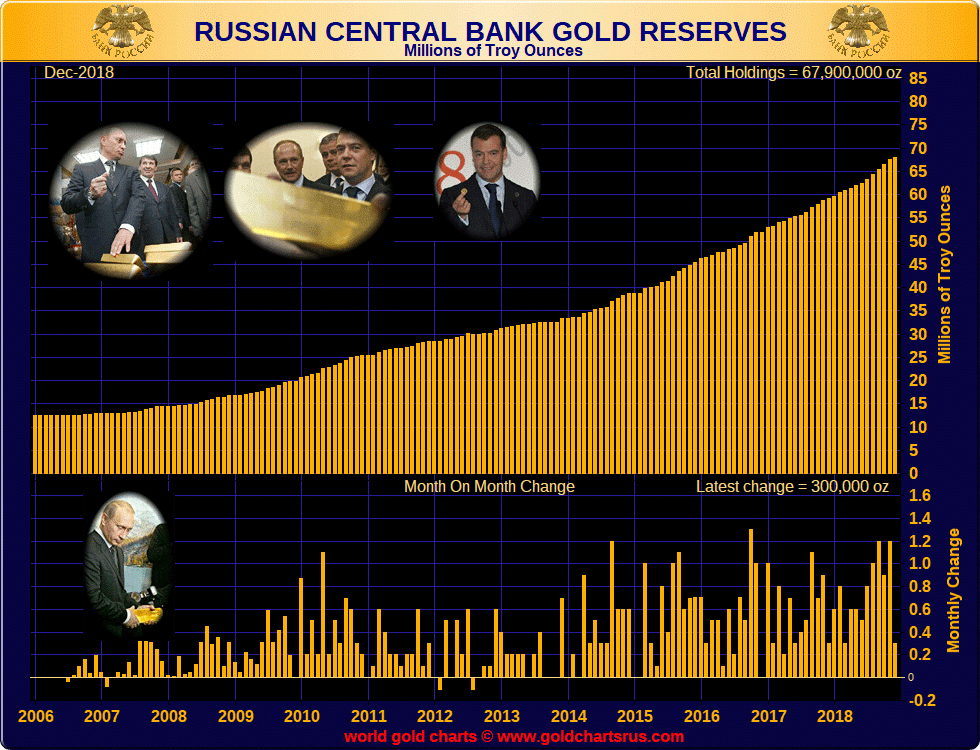 China dropped to sixth place as it reported an increase in gold reserves just once in more than two years, with its holdings rising to 59.6 million ounces in December 2018 from 59.2 million ounces in October 2016.

Industry sources said one of reasons Russia’s central bank was betting on gold due to U.S. sanctions was because it could not be frozen or blacklisted.

“It seems that there is an aim to diversify from American assets,” said a source at one Russian gold producer, referring to the central bank’s holdings.

Putin said in May that “the monopoly of the U.S. dollar is not reliable enough, it is dangerous for many”.

Russia’s central bank is buying domestically produced gold from commercial banks. The size of future purchases is a state secret. It is not clear whether it will keep raising its gold holdings at the same pace, of about 14 percent a year, in 2019.

However, the central bank has already bought a significant portion of Russia’s domestic gold production, which is also rising but at a slower pace, industry sources said.

According to the latest available data from Russia’s Finance Ministry, Russia produced 8.5 million ounces (265 tonnes) of gold between January and October last year.