It seems that 2022 will be the year when the US Empire disintegrates faster than anyone could have imagined. Empires need strong leadership but electing a weak octogenarian president certainly fits the picture of a collapsing empire.

With the world on the verge of a major geopolitical conflict that has a high likelihood of developing into a war, the US certainly doesn’t have the statesman who could take them through such a conflict victoriously.

Putin has got the US over a barrel with Ukraine and Biden is unlikely to get any support from Scholz, the German Chancellor, or from President Macron.

The US has a constant Russia fear and is desperate to make defence agreements with many of the countries bordering on Russia. Europe’s and the EU’s relationship with Russia is more complex, in particular due to the European strong dependence on Russian energy and in particular gas. Germany for example is dependent on Russia for 60% of its natural gas. As Germany is now closing its last nuclear power plant, they are totally reliant on Russian gas and therefore very unlikely to alienate Putin.

So Germany will not side with the US against Ukraine and Macron is posturing as usual without knowing what to do.

Putin has had a bee in his bonnet ever since the Maidan revolution in 2014 when there was a coup, allegedly US backed, to throw out Ukraine’s then president Yanukovych and install a US friendly regime.

SWEDEN HAS FEARED THE RUSSIANS FOR OVER 300 YEARS

Whilst the world worries if Putin will invade Ukraine, Sweden is also concerned that “the Russians are coming” just as they have feared since 1709 when they lost the battle of Poltava against Peter the Great.

So Sweden believes it is facing a real threat from Russia in the Baltic and is now getting ready for war. Sweden is taking Russia’s activities on the Ukrainian border so seriously that 120 Swedish troops have moved from the Swedish mainland to the island of Gotland in the middle of the Baltic. It should be pointed out that Sweden has not taken part in a war since the Napoleon wars in the early 1800s and their army and weapons might be somewhat rusty. Maybe another 100 or so fierce soldiers will be moved to frighten off the Russian navy, air force and army.

Yes, the Swedes are right to worry about Russia’s intentions in Ukraine. But based on history, Sweden still looks very safe and even if they are not, a couple of hundred troops are unlikely to save them.

There have been three major invasions of Russia/Soviet Union in history. Sweden in the early 1700s, Napoleon in the early 1800s and Germany in the 1940s. Each time Russia was assisted by very cold winters and also a tactic of retreating the troops and burning the cities behind them. Thus the attacker had no provisions and many soldiers starved or froze to death. In the final battles, the Russians were facing weak and greatly diminished enemies and therefore were victorious in each one of these major invasions.

Since the Swedish king Karl XII lost the battle of Poltava in 1709 against Tsar Peter I, the Swedish Empire, which then dominated Northern Europe, gradually declined. From that time, Sweden has always feared the Russians. The map of Europe and Russia could have looked very different if the young king Karl had been victorious.

Whether Russia will invade Ukraine or not, time will tell but the signs look ominous. Russia has never seriously invaded Western Europe (except for WWII to stop the Germans) but has turned its attention east and south-east primarily. It is quite clear that Putin’s ambitions are to gradually recreate the old Russian Empire.

The potential invasion of Ukraine, even if without violence, is likely to have a major impact on the world. What makes such an invasion more likely is that Russia historically considers Ukraine to be part of their empire.

The situation between China and Taiwan is very similar. China considers that Taiwan is theirs and a Chinese invasion would not be a major surprise.

How the US and the rest of the world would react to either of these potential invasions is what will determine if we are facing a potential world war. But Putin’s judgement of the US is probably correct namely that the US is a country with weak leadership, a weakening military and economically bankrupt. Yes, the US has a massive nuclear arsenal but even that is today unlikely to be effective against a vastly superior Russian missile system.

A war in itself is always dangerous for the world economy and geopolitical situation. In a world which is financially and morally bankrupt, even an invasion by Russia or China without major violence, would be enough as a catalyst for the global debt and asset bubbles to implode.

A FRAGILE WORLD ECONOMY ABOUT TO BURST

The fragility of the world economy must be obvious to any observer who cares to look.

If we just take US stocks for example, the overvaluation is blatant but sadly one eyed investors can only see a market which constantly rises. Their best friend is the rich Uncle Fed whose pockets are limitless. Thus, he will always support the market however deep it falls. Not only that, he will also hand out any amount of money to his fellow bankers that they request to finance their loss making extravaganzas.

The problem for Uncle Fed is not the depth of his pockets but the quality of their contents. The more wizardry that emerges from his pockets, the lower its value.

Stock markets are massively overvalued on any criteria like margin debt, value to sales, price earnings ratio etc. It is not just overvalued but at historical all time extremes whatever measure we apply.

But let’s take the very reliable Buffet Indicator to tell us how drunk investors really are.

A GLOBAL DEBT BUBBLE ABOUT TO FIRST EXPLODE AND THEN IMPLODE

With global debt up 3x in this century, from $100 trillion to $300 trillion, the rocket fuel that has driven this explosive growth in asset markets is just thin air turned into fake money.

Thereafter, as the world discovers that the central bank liquidity created out of thin air is worthless, the debt bubble will implode in an instant, together with all the assets financed by the debt bubble. 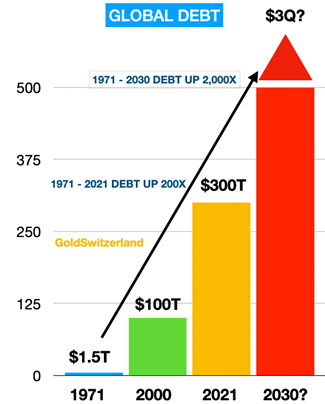 COVID WAS NOT THE CAUSE BUT JUST AN EXCUSE

I have pointed out many times that Covid was not the cause of the current crisis but just a convenient excuse. The real crisis started in September 2019 when the Fed was forced to make emergency loans to a number of severely illiquid Wall Street trading houses like Nomura, JP Morgan and Goldman Sachs. In total the Fed made emergency repo loans to the extent of $19.9 trillion. Nomura, Goldman and Morgan received $8 trillion and just six houses received 62% of the almost $20t which in addition to the aforementioned banks were Barclays, Citigroup and Deutsche Bank. See table below.

What makes these repo loans even more controversial is that according to the economist Michael Hudson, they were made in contravention of Dodd-Frank.

When Covid started in early 2020, central banks could conveniently blame the pandemic for the massive and continued expansion of their balance sheets. But the real problem was that the major investment banks were again on the verge of bankruptcy. 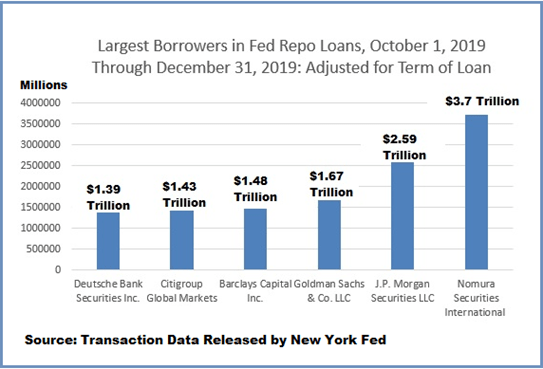 2022 THE BEGINNING OF THE BIGGEST GLOBAL ECONOMIC CRISIS IN HISTORY

What has always been crystal clear (at least to me!) is that the 2006-9 crisis was never resolved but just temporarily patched up. It has been an absolute miracle that central banks have managed to fool the world yet another 10 years, until September 2019, when the problems reemerged.

Admittedly, all the players in the financial system have had a vested interest to take part in this fake Monopoly game built on an illusory foundation. They have had all to gain, since they would reap all the benefits, but not be liable for any of the losses.

But the problem that reemerged in September 2019 won’t go away. The explosion of central bank balance sheets and debt have now reached unmanageable and insoluble proportions.

2022 will be the first of many years when the world will experience the biggest financial and economic crisis in history.

Because never before in history has the world seen a global economic crisis of these proportions caused by massively excessive debts in all corners of the world, exacerbated by epic bubbles in all asset markets.

So whether a potential invasion of Ukraine or Taiwan will be the catalyst, or if it comes from a less significant snow flake that triggers the avalanche, is irrelevant.

The risk of a massive avalanche that crushes credit and asset markets is so high that anyone who doesn’t get out of its way will see his wealth totally crushed.

Gold has for 5,000 years been the best protection in any crisis and this time is unlikely to be different.

The table below was part of an article I wrote that showed how to turn $10,000 to $1 billion by holding a stock index or gold for 10 years and reinvest it just once on January 1 every ten years starting January 1, 1970. 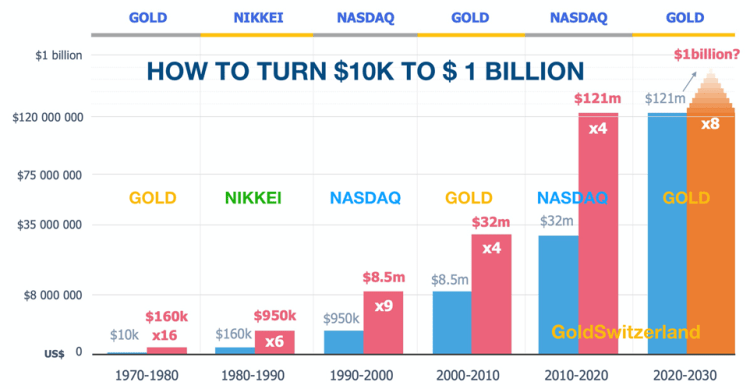 I would expect gold to be much higher by that time but remember that we are holding for wealth preservation purposes and not as a speculative investment, so price is less important than protecting your wealth. 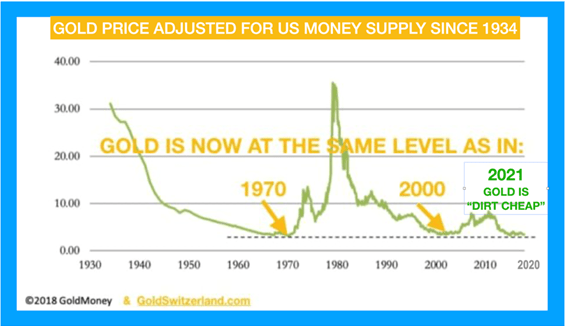 We normally never worry about short term moves since the key today is to protect wealth.

For investors who stick to stock market investments, they are about to get a shock of a lifetime as the stock market bubble bursts. The decline in asset values will be violent and sustained, leading to a massive destruction of wealth. The start of the real crash could be in the next 2-3 months.

Gold has consolidated for a sustained period and is about to break out on the upside. Once gold breaks out decisively above $1,900, the move up will be very powerful.