A number of Reddit users on the popular r/WallStreetBets forum have said they are planning to launch a coordinated effort to target silver as their next short-squeeze target.

Posts encouraged individuals to use the IShares Silver Trust, the largest silver exchange-traded fund, and carry out what one user called the “BIGGEST SHORT SQUEEZE IN THE WORLD.” 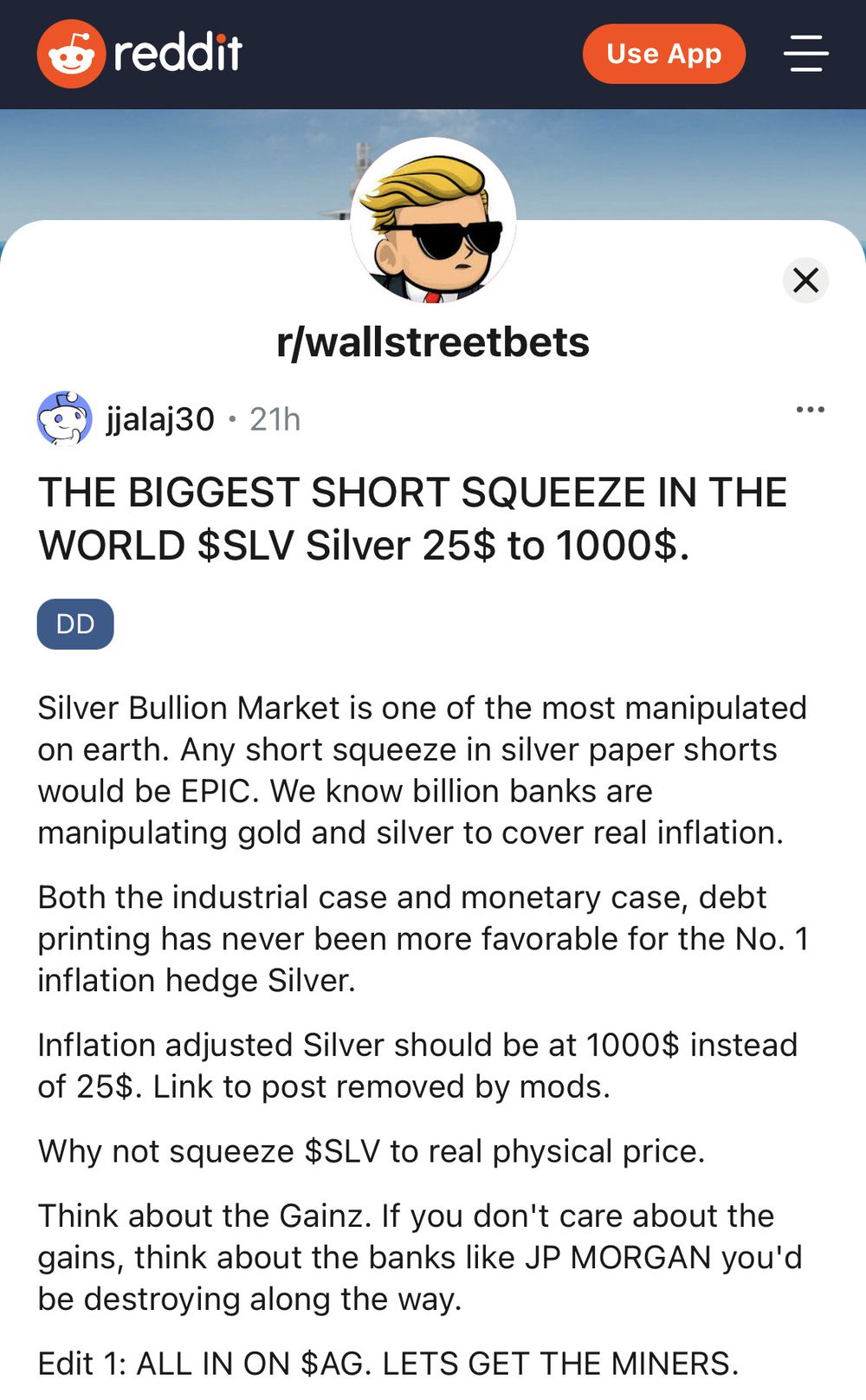 “Silver Bullion Market is one of the most manipulated on earth. Any short squeeze in silver paper shorts would be EPIC,” a user on Reddit’s WallStreetBets wrote. “We know bullion banks are manipulating gold and silver to cover real inflation. Both the industrial case and monetary case, debt printing has never been more favorable for the No. 1 inflation hedge Silver.”

Another post on the site said, "inflation-adjusted Silver should be at 1000$ instead of 25$. Why not squeeze $SLV to real physical price. Think about the Gainz. If you don't care about the gains, think about the banks like JP Morgan you'd be destroying along the way."

It came after purchases of hot stocks like GameStop, KOSS, and AMC were restricted by various platforms, sparking calls by members of Congress for an investigation into whether there was collusion by hedge funds and platforms like Robinhood. Robinhood CEO Vlad Tenev described that assertion in media interviews this week as a “conspiracy theory.”

That's why you need to own physical gold/silver. At some point the gold and silver market will go "no offer". #gold #silvershortsqueeze https://t.co/bhIbiBLG3a

Shares of video game retailer GameStop Corp have soared 1,625 percent since the start of January. Driving the rally are individual investors who said they have been stuck at home for the last ten months. Many have turned to online forums like WallStreetBets on Reddit and are buying the stock, some as a form of protest against hedge fund managers who wagered that it would fall.

One expert said those Reddit users will have a difficult time making an impact in the silver market.

“It is true that the combined efforts of those on the Reddit forums can dramatically influence the price of individual stocks, but if you compare the size of the entire silver market to the market cap of the individual companies that forums have recently targeted, we don’t see this as having potential to significantly move silver into a short squeeze scenario,” John Feeney, business development manager at Guardian Vaults, told Bloomberg News.

“Silver’s market cap is too large and those on the forums typically want to see quick gains, so I wouldn’t read into it too much,” he said.

But Peter Schiff, the CEO of Euro Pacific Capital, wrote that it appears the “Reddit raiders have turned their attention to silver stocks,” adding: “They’re getting smarter. Silver stocks are actually cheap, and represent good investment value. The fact that some investors were foolish enough to short these stocks makes their trade even better.”

The thing is that no matter what happens with #SilverSqueeze, a lot of younger people are for the first time informing themselves that metals are the only true real money. That realization sticks for life, even when squeezes end. This is a red pill moment for many & its beautiful