"Buying gold is just buying a put against the idiocy of the political cycle. It's That Simple"

However, several entities refuse to be fooled by such "cheap" tricks. One is China, whose ravenous apetite for gold has been extensively discussed previously. The other is the Bank of Russia.

According to central bank data, Russia's gold reserves rose to 40.1 million troy ounces as of May 1 compared with 39.8 million ounces a month earlier. Russia increased its gold holdings for many months in a row last year, as shown by central bank figures and represented in the chart below. 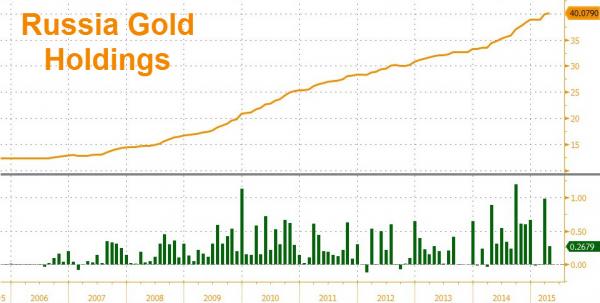 So why is Russia engaging in this gold-buying spree when it likely has more immediately gratifying ways to spend its reserves?

The answer was given by Dmitry Tulin, who manages monetary policy at the central bank, was as concise, as sensible, and as lucid as that given by Bass. From Reuters:

"As you know we are increasing our gold holdings, although this comes with market risks," Tulin told lawmakers in the lower house of parliament.

"The price of it (gold) swings, but on the other hand it is a 100 percent guarantee from legal and political risks."

And with global political risks only set to rise, since under central planning politicans are made obsolete and are thus even more prone to "idiocy", expect Russian gold buying to continue indefinitely.