A new source of gold demand equal to all of China's gold purchases in 2015 could soon enter the markets. And this extra demand could move gold prices a lot higher.

Islamic investors don't own a lot of gold-related investments, even though they can own gold as currency or jewelry. This has to do with gold's status under Islam's Sharia law, which I'll explain later. Because of this, the $2 trillion held in Islamic financial institutions has very little exposure to the precious metal.

However, there will likely be a "Sharia Gold Standard" in place by the end of the year. This will clarify and streamline gold-investing rules for Islamic finance. As a result, gold could soon become a viable investment option for the Muslim world's 100 million active investors.

The gold market is currently undergoing a pullback in its ongoing bull market. Even if only a small portion of the $2 trillion worth of Islamic assets is allocated to gold products, though, it will support prices in the short term. And, more importantly, this huge new source of demand will provide ongoing support for gold prices.

The new gold standard is being developed by the Bahrain-based Accounting and Auditing Organisation for Islamic Financial Institutions (AAOIFI) and the London-based World Gold Council (WGC). Last month, they issued a press release announcing the standard's "exposure draft." After getting the public's feedback and suggestions, the group plans to meet again this month to finalize the draft. Then the standard's implementation schedule is expected to be announced before the end of the year.

In 2015, China bought a lot of gold. Few people know how much because the government doesn't provide exact numbers. But based on the amount of gold imports that passed through Hong Kong on their way to mainland China, China bought about 1,000 tons of gold in 2015.

Based on current prices, if just 2% of the assets under management at Islamic financial institutions were allocated to gold, it would equal about 1,000 tons of extra demand. That's the equivalent of another Chinese gold-buying spree.

Any large initial allocation to gold may be a one-time event. But Islamic finance is growing quickly and will provide an ongoing source of demand for gold. Standard and Poor's predicts that the Islamic finance industry could reach $5 trillion by 2020. Other forecasts say the number could be as high as $6.5 trillion in four years. 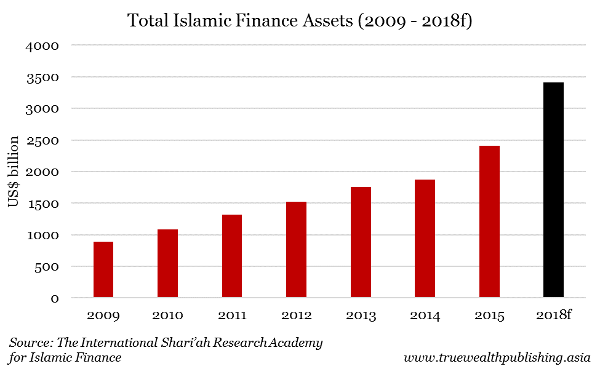 Under Islam's Sharia law, gold is generally considered a "Ribawi item." This means it can't be traded for speculation or future value. It can, though, be held as a currency or jewelry. As a result, there has been an ongoing debate among Islamic scholars as to whether gold can be traded as a commodity. The coming gold standard seeks to solidify agreement among scholars.

In July, AAOIFI member Yusuf DeLorenzo said, "The hesitation about investing in gold when credible Sharia standards are unavailable is nearly universal in the Islamic world. On the reverse side of the equation, however, gold has historically been the choice of individual Muslims desirous of preserving wealth and value."

Since gold has a long history with Muslims -- as a currency and store of wealth -- it's expected Muslim investors will quickly embrace gold investment products. These would include gold savings plans, gold certificates, physically-backed gold ETFs, certain gold futures and gold mining stocks.

The expected extra demand from Islamic investors coincides with gold's recent pullback from its 2016 rally. It's down 12% from its August highs (and has lost 5% since Donald Trump won the U.S. presidential election), but is still up 14% for the year.

There are still a lot of catalysts for gold prices to climb higher. Central banks' zero interest rate policies, global currency instability and global political uncertainty -- including the Brexit vote and the U.S. election aftermath -- all add to gold's allure. 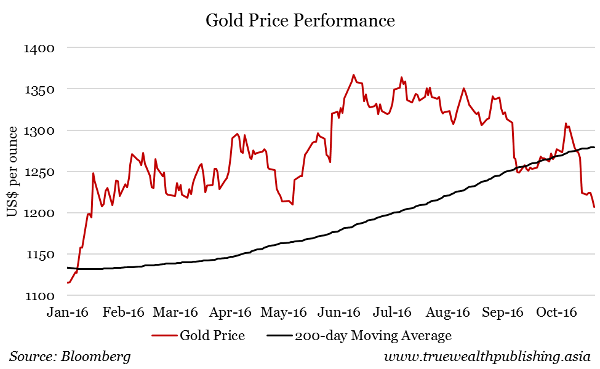 This all indicates that gold's recent weakness is just a pullback in an historic, and ongoing, gold bull market.

And an extra 100 million Islamic investors, with trillions of dollars in assets, are about to jump in the gold investment pool. So, now's the chance to buy gold at lower prices.