In March, 2000, the start of the imploding TMT (Technology-Media-Telecom) shares bubble marked the start of Kondratieff’s Winter correction wave, following years of maniacal stock market speculation and historical valuations that have not yet been seen again. 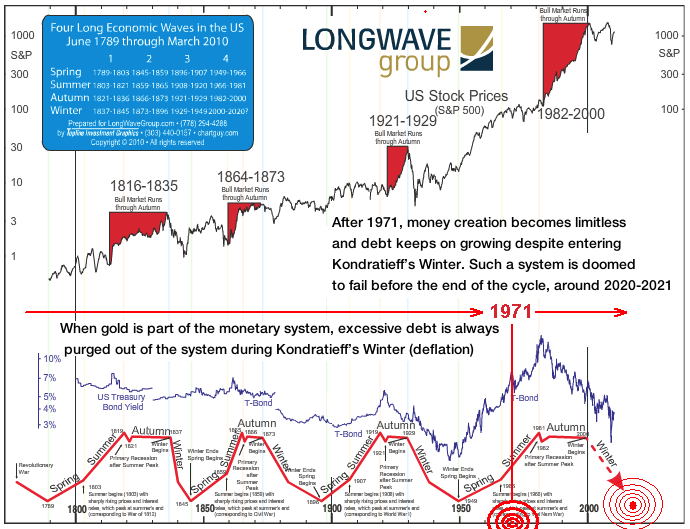 After 1971, money creation becomes limitless and debt keeps on growing despite entering Kondratieff’s Winter. Such a system is doomed to fail before the end of the cycle, around 2020-2021.

When gold is part of the monetary system, excessive debt is always purged out of the system during Kondratiefff’s Winter (deflation).

Since then, the Fed has fought by all possible means the installation of the correction wave, because the amount of debt is so high that letting deflation happen would lead to a never-seen-before catastrophe. As a matter of fact, we have long passed the point of no return and the only solution the Fed has is to devaluate the dollar, even if it means creating a new currency. 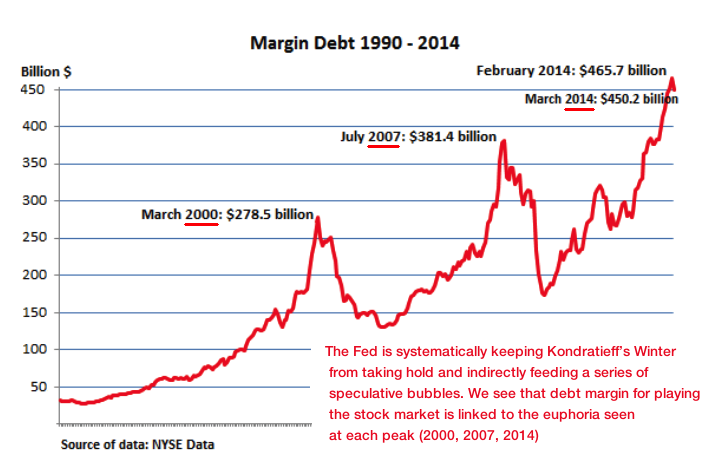 The Fed is systematically keeping Kondratieff’s Winter from taking hold and indirectly feeding a series of speculative bubbles. We see that debt margin for playing the stock market is linked to the euphoria seen at each peak (2000, 2007, 2014).

In both peaks of 2000 and 2007 Fed’s easy money fuelled speculation (stocks and real estate) and, each time, it marked the start of a new crisis. In 2014 speculation is back, as can be easily seen in the stock market, but also in smaller markets such as Bitcoin money (peak probably reached in December, 2013) or fine art.

When the Dow Jones Industrial Index crashed on September 29, 2008, it was showing -777.7, the highest daily decline in points in history, a number mimicking a Las Vegas one-arm bandit’s miraculous score... But the minus sign before 777.7 was telling that the Wall Street Casino bankers hadn’t hit the historical mega-jackpot... but had rather aligned some fateful numbers for their destiny.

French journalist Pierre Jovanovic wrote a book, 777, with this event in mind. But this is not the only coincidence, as far as I am concerned. Without being aware of it, having absolutely no affinities with numerology, I wrote the preface of the first edition of my book on the financial crisis from 2008 to 2015 on September 7, 2007. In French, “septembre” has the same root as seven (sept). Once again, 777 was looking like a subconscious call, and my book would refer to the second seven-year period of crisis.

The number 7 is very particular and is often cited in religious books, particularly in Joshua’s Book, narrating the fall of Jericho, one of the richest cities in the world. Pierre Jovanovic points to the fact that the Wall of Jericho fell when the 7 priests blowing their 7 trumpets went around the city 7 times on the 7th day... and that Wall (!) Street, ‘marked’ with this-777.7, may fall as well, if people having nothing to lose were to revolt. All this must be taken symbolically, of course: Wall Street, today, is the strongest financial place in the world and, in a certain fashion, is leading the world. Wall Street is a modern days’ Jericho, and this -777.7 is a very bad omen. 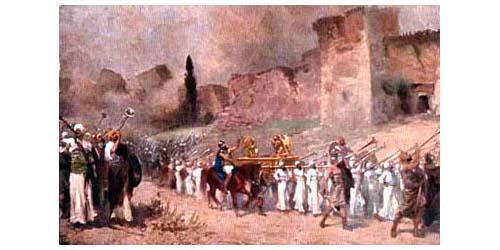 The “Occupy Wall Street” movement might be the first stone thrown and appears as a siege around the walls of the financial place.

The next revolt may not be as peaceful... This year, we’ve seen protest movements in Germany to abolish the Fed, seen as the “scourge infecting the whole planet”. Those movements against Wall Street and the Fed will likely gain in amplitude and even degenerate if the economy were to show signs of weakness anew, which would result in an increase in poor workers and food stamps beneficiaries – food stamps costs have risen from $40 billion in 2008 to $80 billion in 2013. In Europe, unemployment rates, higher than 25% in Spain and in Greece, might spread to other weak countries of the continent and result in several revolt movements that could also degenerate.

Other coincidence...? In January, 2014, IMF’s chairwoman, Christine Lagarde, made a rather surprising speech on the meaning of 7 and the importance of 2014, a benchmark year (2+0+1+4 = 7), the G7 (G = 7th letter) and the 70th anniversary of the Bretton Woods accords. I do not believe this was a coded message, as implied by the video below. I think she is just hoping for a coming 7-year prosperous cycle from 2015 to 2021 and trying to best decode what her intuitions are saying. I think she has it right in terms of cycle timing, but she is completely wrong on the nature of the next cycle.

The 2014-2015 period is effectively a very important one in the long Kondratieff’s Winter correction that started in 2000-2001, said correction expected to purge the economy from excessive debt. Lagarde talked about “having left the big paralysing cold behind”, but Kondratieff’s Winter paralysing cold, unfortunately, will be felt until the debt problem is definitely solved. I think the next 7-year cycle will be the worst of the three because it will have to tackle the source of all our evils: the financial/monetary system. And, because the system will have to come to terms with the necessary reforms that have been kicked down the road so far, we have to expect an historic stock market crash in 2014 or 2015 followed by a US dollar crash. But whatever the trigger, failing is inevitable. IMF’s Lagarde says so herself, “the crisis isn’t over”, and no real economic recovery will occur without this crisis “finishing the job” it has started.