The situation on the paper gold market shows that speculators are massively short on gold currently (even more so since they’re anticipating a friendly settlement for Greece). On the other hand, the commercials have taken the opposite side of the trade.

Generally, this is a typical signal of a price having reached bottom... Greece is only fodder for daily speculators; it certainly wasn’t needed to push gold from $250 to $1,900! And eventually from $1,200 to $3,000 or $6,000... The problem is much more global, at the level of the excesses of central banks all over the world and their paper currencies that need to be printed as fast as possible to keep the system from collapsing.

This pause in the gold market is akin to being in the eye of the storm. The more central banks distort markets since the 2008 crisis, the bigger the storm grows, and the harder it will be to clean up afterwards when markets correct back to their equilibrium value.

On the much shorter term, the junior miners’ GDXH index is still resisting at a relatively high level (as compared to its lowest), despite the recent attacks from the COMEX speculators.

We can see on the graph below that the net short position of the commercials was getting close to a favourable area for establishing a major bottom, last Friday. 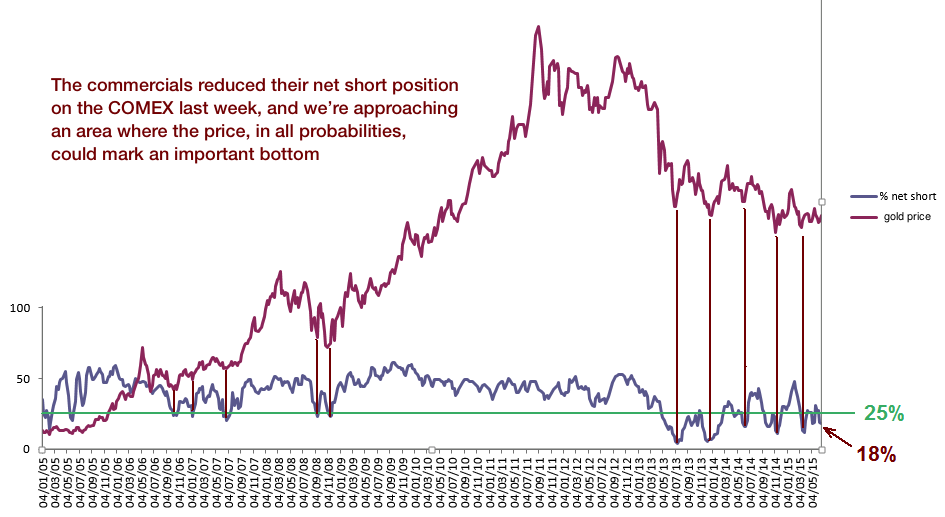 We should note that from a seasonal point of view, the month of June is statistically favourable to the establishment of a major bottom on the gold market (between June and July), as you can see on the two seasonal graphs from Adam Hamilton. The first one covers the 2001-2015 period, and the second one, excluding the 2013-2014 bear market, shows an even more pronounced trend toward setting a major bottom in June.