The Fed bankers must be really upset: They haven’t even started to raise their base rate and markets are already in panic mode with the expected end to QE 3, just like junkies being told they might have to go into detox. The truth is that economic recovery is so fragile that it can’t go without monetary fixes.

The wind of speculation, brought about by much too low interest rates fixed by the Fed and the other central banks, is such that even turkeys have started to fly! In 2014, stock market euphoria and multi-billion dollar IPOs have reached new heights. Money has flown into all kinds of assets, including crypto-currencies. When the tide recedes we’ll be able to better see who was swimming naked. 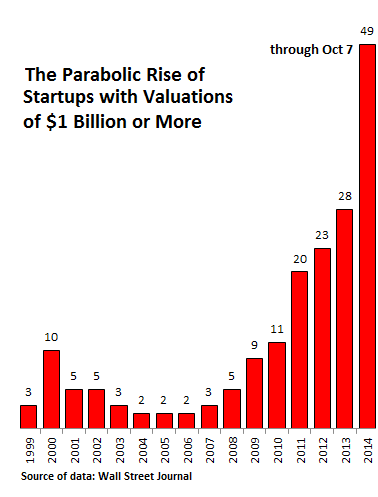 The bursting of the Bitcoin bubble may be interpreted as an advance warning signal of a coming implosion of the stock market bubble, just as the bursting of the internet bubble in 2000 preceded the 2001 and 2002 stock market’s poor performance. These small bubbles can only occur in a larger-scale speculative environment.

We can also observe some disquieting bearish divergences between the RSI and MACD indicators and the price action on the weekly Dow Jones since 2013: 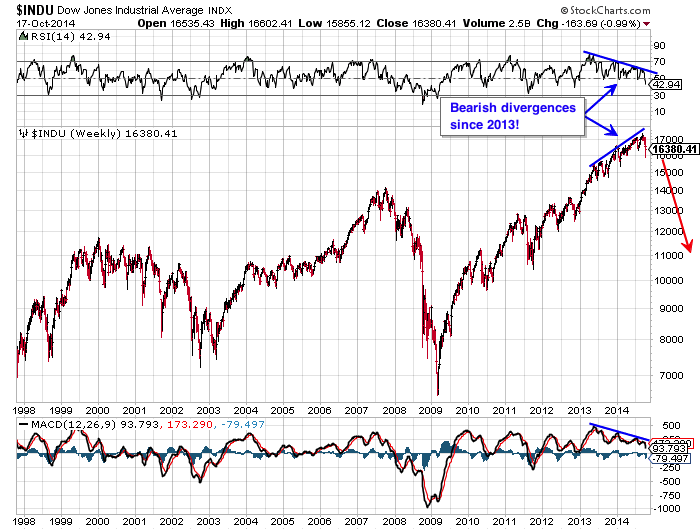 According to the Bank for International Settlements in Basel, investors have become way too complacent and quite vulnerable to any meagre rise in interest rates. The Bank warned, this summer, that the world economy is, in many aspects, more vulnerable to a financial crisis than it was in 2007! Debt ratios are way too high around the world... it’s as if the 2008 crisis hadn’t been enough of a warning. The BIS is also worried about the consequences of a credit tightening that could lead to a violent and rapid crash in the bond market.

Now, with several stock market indexes under their 200-day moving average, an alarm is sounding for all the participants in the Wall Street “casino”.

As far as gold is concerned, support at $1,200-$1,180 held, but gold miners have shown weakness, surprisingly, not following gold in its $70 rebound. I watched a series of trading days where sellers were liquidating their positions in miners almost without stopping, despite the metal selling higher. In principle, such a divergence between gold miners and the metal constitutes a dire advance warning signal, but I think that this weakness might be due to other factors, such as strapped hedge funds having to liquidate some assets for their cash needs. Because, with the tide about to recede, the hedge funds, strongly leveraged, will be among the first naked bathers running for the beach cabins!

And I find comfort in the way junior miners (GDXJ) have performed better than the larger ones (GDX) since December 2013, which doesn’t point toward a bear market in the gold miners.

The anti-cyclical evolution of the gold and gold mining sector since 2011, sentiment turning into hatred for gold and the miners, the high level of compression on the commercials that are net short on the COMEX (see my Sept. 20 commentary), interest rates not being raised in the near future, which will weigh on an overbought dollar, a weak global economy... all of this rather points toward being near major support for gold, silver and the miners.

In the process of competitive currency devaluation, first place may be held alternatively by one or the other, but all currencies will eventually reach their intrinsic value as soon as the States’ capacity of reimbursing their debt will be seriously doubted by the investors.

Confidence is actually at its highest, whether in the capacity of the States to pay back their debt or in the central banks’ credibility, but History has shown that loss of confidence can happen suddenly and brutally, especially if fundamentals have been tossed aside for a long time with unrealistic hopes on economic perspectives.