According to VTM Nieuws, Belgium is contemplating the repatriation of its gold reserves.

According to media reports Belgium will start to repatriate foreign held gold reserves as well ..

It is essentially for historical reasons that the Belgian gold is held in England. It was transferred to London during the Second World War to keep the Nazi regime away from looting it.

After the Netherlands that just repatriated 122.5 tonnes, Germany, or even France (Marine Le Pen requested that the central bank repatriate France's gold), another European country is showing interest for its gold stored abroad. There was also, recently, a referendum in Switzerland about repatriation of gold stored abroad. 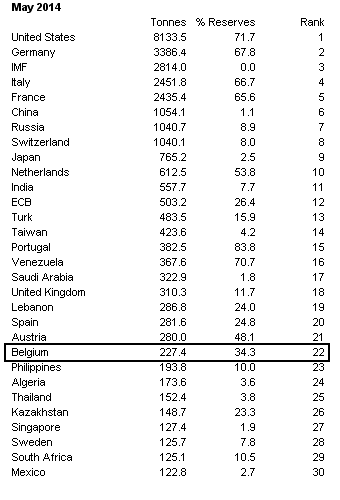 Just like Switzerland did, Belgium got rid of a sizable portion of its gold reserves: since 1989, Belgium has sold more than 1,000 tonnes.