If president Biden wants to save the US economy, his first measure should not be to print $trillions of worthless new money but instead tell his secretary of the treasury Janet Yellen to withdraw all debased currency from circulation just as Aristophanes suggested in 405BC, Copernicus in 1517 and Gresham in 1560.

There is only one problem with withdrawing the debased dollars… THERE WOULD BE NO MONEY IN CIRCULATION AT ALL since all dollars are totally debased.

But this didn’t worry Queen Elisabeth I (daughter of Henry VIII) in 1560 in England. She ordered her adviser Sir Thomas Gresham to withdraw all debased currency from circulation and replace it with silver and gold coins with the highest fineness.

Queen Elisabeth’s father Henry VIII did not only got rid of many of his wives but also of good money. Gresham counselled her to get rid of the bad money that Henry had introduced. Henry had a lavish lifestyle and also conducted expensive wars against France and Scotland. Thus he did what virtually every nation has done in history and debased the currency.

Gresham noticed that bad money drives out good money. The consequences were that people saved the good money and only traded in bad money. Also, merchants in the Low Countries (Belgium, Netherlands) insisted to have bigger quantities of the new money since the purity was much lower.

The problem with paper or fiat money is that you can’t evaluate the fineness. The fact that $100 in 1971 has been debased by 98% is impossible to tell since it is still called $100 although the purchasing power in 2021 is only $2!

And this is how governments and central banks continually swindle their people by debasing their money without the people’s understanding or knowledge.

Imagine if Biden instructs Yellen to take all dollars (bad money) out of circulation and to replace it by good money – gold.

Good money could naturally not be another fiat currency or digital money but would have to be gold backed money. There are many ways to calculate what the gold price would need to be, depending on which measure for money supply is used.

This is obviously not a forecast but just a theoretical calculation. And as we know, gold is an international currency so China and Russia would have a major say in this issue.

Also, it is very questionable if the US has the 8,000 tonnes that it officially declares. There has been no full physical audit since the 1950s when Eisenhower was president.

China and Russia declare holdings of around 2,000 tonnes each. But China’s real holdings could be well in excess of 20,000t and Russia’s also well above the official 2,300t.

SPEND TODAY BEFORE IT IS WORTHLESS TOMORROW

Gresham was clearly right that bad money pushes out good money. This is why most people in the world spend bad money today since it is continually debased and worthless tomorrow.

Instead assets that maintain purchasing power better are held and not spent such as gold and silver. But other investment assets such as stocks, bonds and property are also hoarded as they have appreciated considerably more than worthless fiat money.

Just for clarity the phrase Gresham’s law was coined 300 years after his death. But it wasn’t actually Gresham who came up with this concept but Copernicus (picture) in 1517 already.

Copernicus described this phenomenon as QTM (not MMT!) or Quantity Theory of Money. In simple terms this meant that if money quantity doubles, price also doubles. Thus the value of the money halves.

This is exactly what happens in the economy today. The chronic disease of budget deficits, debt expansion and money printing can never end well.

And nor will it this time, just as it didn’t in Roman times (180-280AD), for John Law in France around 1720 and hundreds of other times in history.

This is why Voltaire coined the phrase: 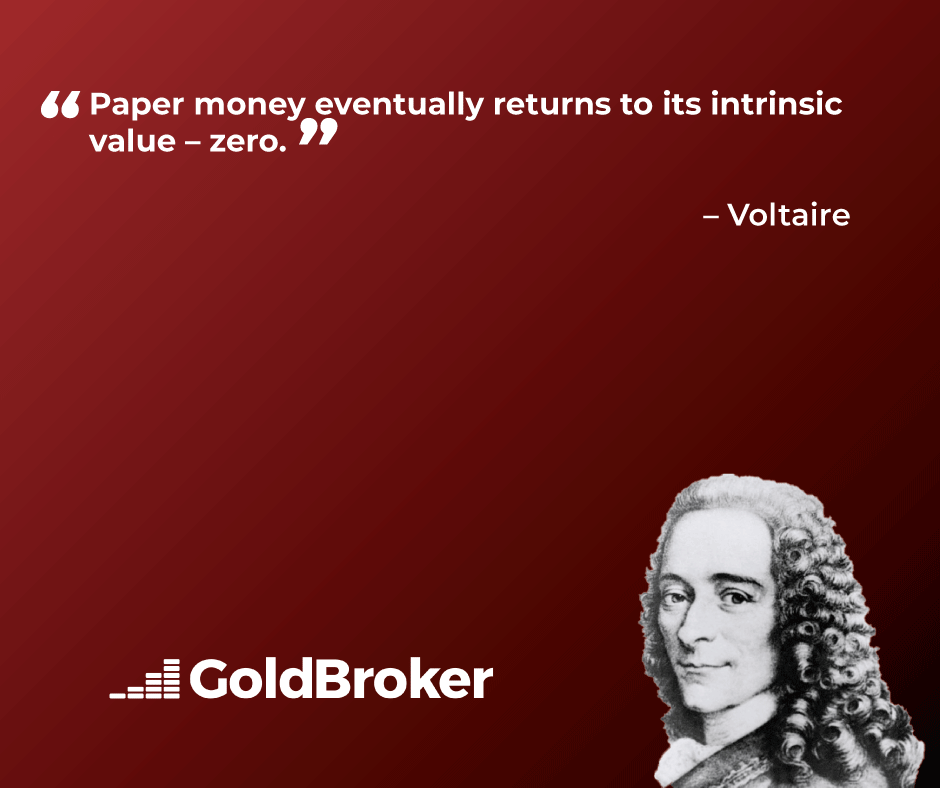 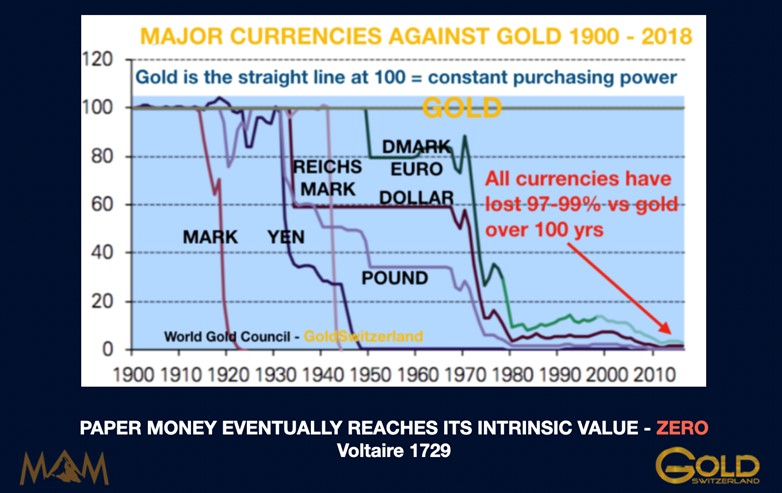 History gives us the same lesson over and over again and still mankind seems incapable of learning from history.

Arrogance and greed are clearly much more dominant traits than humility and contemplation.

Why would we otherwise make the same mistakes without fail when history so lucidly teaches us that we need not?

But since we are in a very ugly era when history is often eradicated with government’s or parliament’s tacit approval, we can see how history is not just ignored but also repudiated.

A final point on Copernicus’ or Gresham’s law about bad money and good money. We can even go back 2 1/2 millennia to find the same phenomenon.

In 405 BC, the Greek playwright Aristophanes wrote a play called the Frogs. This play was about Old Ways – Good and New Ways – Bad and that Athens should turn back to men of integrity as well as GOOD money:

“Gold or silver, each well minted, tested each and ringing clear.
Yet, we never use them! Others always pass from hand to hand.
Sorry brass just struck last week and branded with a wretched brand.
”

Plus ça change, plus c’est la même chose (The more it changes, the more it stays the same).

So the world has seen money destroyed regularly for 2,400 years at least and still we haven’t learnt.

I do realise that there might be too much history and nostalgia in this article for the younger generation. My point with this is obviously to stress the utmost importance of history and the past in order to understand the present and the future.

I would expect the new Dream Team of Biden and Yellen (BY) to set all records when it comes to money printing. They are already out of the starting blocks with $2 trillion of new fake money before they have even begun.

Trump increased the debt by almost $8 trillion but once BY have got going with all the multiple programmes they have laid out, no one can predict where it will all lead to. It is likely to be a minimum of $3.5 trillion per year as we have just seen. But to increase that to $5-7t is more likely. So a total of $20-28t for 4 years doesn’t seem implausible.

This sum doesn’t include higher interest rates which is very likely or saving a failing financial system which is even more likely. All this could easily amount to $100s of trillions or more.

And once the $1.5 trillion derivative bubble bursts, BY will set the record as the biggest money printers in history and the ones that extinguished the dollar.

We must remember that the current problems started in September 2019 with the ECB and Fed panicking due to problems in the financial system.

The Covid-19 outbreak couldn’t have started at a better time for the EU and the US.

Normally governments start a war or a major terrorist attack in order to justify massive increases in debt and money printing. No one knows how the coronavirus started but it certainly came at a very opportune moment for governments and central banks under pressure.

So far the $10s of trillions of printed money has not translated into inflation in official consumer prices.

But we are now seeing major inflation in commodity prices.

And if we look at general commodity prices – up 89% since April 2020 – they are telling us that hyperinflation is not far away.

The 50 year chart below of the Dow looks frightening with its bright red colour. That is obviously intentional because the Dow is now finishing an incredible move which started in the low 800s 50 years ago. 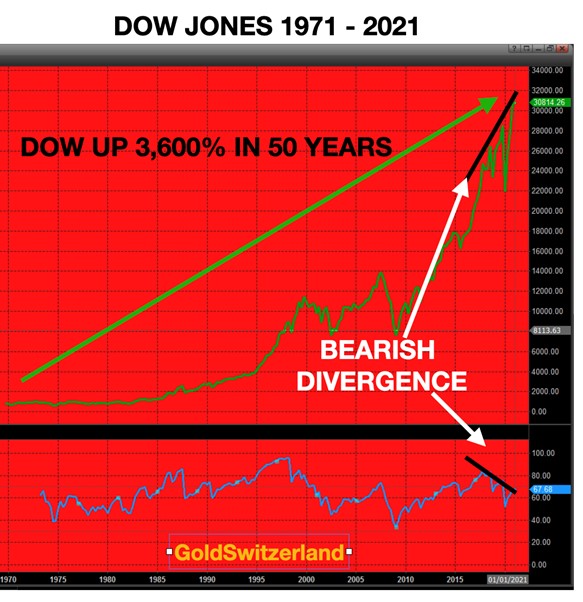 This quarterly chart shows four higher tops since 2017. But the warning signal is the blue RSI indicator at the bottom. Every new top in the Dow has been unconfirmed by the RSI momentum indicator as all the blue tops are lower in spite of higher Dow tops.

In addition our proprietary cycle indicators are telling us that the Dow could be topping now.

But whether the Dow tops here or we will see a final hurrah is irrelevant. What is important is that once the Dow turns, we are going to see the most vicious bear market in history. A fall of 90% or more in real terms is very likely.

That will be the start of a hyperinflationary depression of a magnitude that few can imagine.

After the hyperinflationary period, a deflationary depression is likely. So very difficult times ahead.

The catalyst could be anything from the sheer size of the bubble, to debt or banking problems, or that the Covid vaccine is not effective or even dangerous.

Gold is finishing its correction now before a very strong move to new highs.

It serves no purpose to give targets for gold. Over 10 years ago I indicated that gold should reach $10,000 in today’s money.

Many gold experts are now giving higher and higher targets. In my view these forecasts serve no purpose if at the same time the forecaster doesn’t indicate what happened to the purchasing power of the currency.

As I have indicated above, the dollar and most currencies are likely to reach “almost” zero. At that point gold will not be $50,000 or $100,000 but should reach “almost” infinity.

Infinity sounds unreal and it is of course. But the point I am making is that all these bullish price forecasts for gold serve very little purpose if the forecaster doesn’t indicate how much the currency has depreciated at the same moment.

Suffice it to say gold is likely to at least reflect the debasement of the currency it is measured in but probably a lot more.

The reason for that is again Gresham’s law.

Remember that bad money drives out good money. Also remember that gold is the only money that has survived intact in history.

The gold market is definitely the best example of Gresham’s law.

Not only does bad fiat money drive physical gold out of circulation. So why spend your gold when it throughout history has always appreciated against paper money, or to express it more correctly, when paper money is repeatedly debased against gold.

But what has really driven out real or physical gold is paper gold.

With paper gold currency determining the gold price, it serves absolutely no purpose to spend your physical gold.

The diagram below show why: 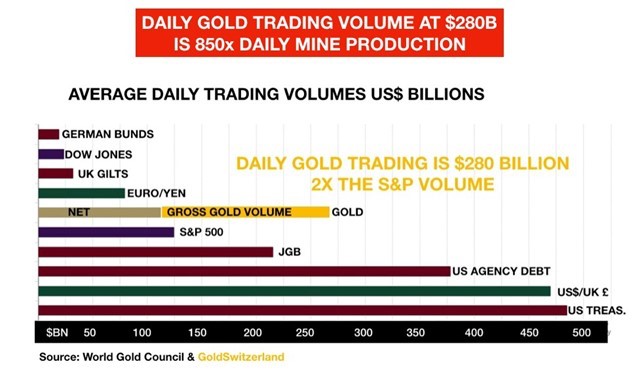 There can’t be a clearer sign that price discovery is impossible in this totally fake paper gold market.

Whilst fake paper gold is traded at $70 trillion a year, annual mine production is a mere $213 billion.

It is a travesty that the real price of gold is set in a casino with worthless electronic entries that have nothing to do with gold.

This fake gold market will one day discover that there is no physical gold to settle the fake contracts.

I said that gold will reach infinity. How high can infinity go………

Get your physical gold now before infinity comes.