Cervantes famous classic novel Don Quixote can in simple terms be described as a fight for liberty and freedom against oppression and against the state. This book is from 1605 and considered to be one of the best books ever written.

In the midst of market madness, risk doesn’t exist because lunatics neither see, nor worry about risk. And still, 2022 will be more about risk and survival than anything else. So I will obviously talk more about “The Triumph of Survival” which I discussed in a recent piece.

“When life itself seems lunatic, who knows where madness lies.” – Don Quixote

The year 2022 will most likely be the culmination of risk. An epic risk moment in history that very few investors will see until it is too late as they expect to be saved yet another time by the Fed and other central banks.

And why should anyone believe that 2022 will be different from any year since 2009 when this bull market started? Few investors are superstitious and therefore won’t see that 13 spectacular years in stocks and other asset markets might signify an end to the epic super bubble.

The Great Financial Crisis (GFC) in 2006-9 was never repaired. Central bankers and governments patched Humpty up with glue and tape in the form of printed trillions of dollars, euro, yen etc. But poor Humpty Dumpty was fatally injured and the intensive care he received would only give him a temporary reprieve.

When the GFC started in 2006, global debt was $120 trillion. Today we are at $300t, rising to potentially $3 quadrillion when the debt and derivative bubble finally first explodes and then implodes as I explained in my previous article. 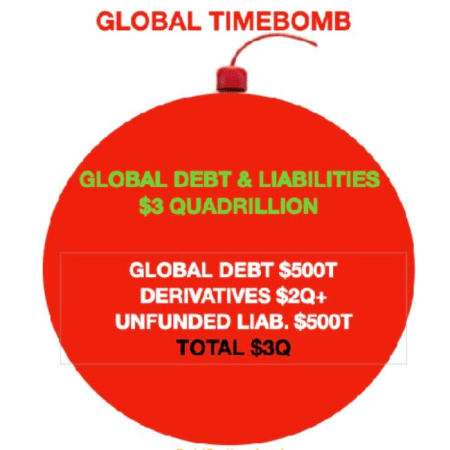 It is amazing what fake money made of just air can achieve. Even better of course is that the central banks have manipulated interest rates to ZERO or below which means the debt is issued at zero or even negative cost.

Investors now believe they are in Shangri-La where markets can only go up and they can live in eternal bliss. Few understand that the increase in global debt since 2006 of $180t is what has fuelled investment markets.

Just look at these increases in the stock indices since 2008:

And there are of course even more spectacular gains in stocks like:

These type of gains have very little to do with skilful investment, but mainly with a herd that has more money than sense fuelled by paper money printed at zero cost.

To call the end of a secular bull market is a mug’s game. And there is nothing that stops this bubble from growing bigger. But we must remember that the bigger it grows, the greater the risk is of it totally wiping out gains not just since 2009 but also since the early 1980s when the current bull market started.

The problem is also that it will be impossible for the majority of investors to get out. Initially they will believe that it is just another correction like in 2020, 2007, 2000, 1987 etc. So greed will stop them from getting out.

But then as the fall continues and fear sets in, investors will set a limit higher up where they intend to get out. And when the market never gets there, the scared investor will continue to set limits that are never reached until the market reaches the bottom at 80-95% from the top.

And thus paper fortunes will be wiped out. We must also remember that it can take a painstakingly long time before the market recovers to the high in real terms.

As Ray Dalio shows in the chart below, the 1929 high in the Dow was not even recovered in real terms by the mid 1960s. Finally it was surpassed in 2000.

This means that it took 70 years to recover in real terms! So investors might have to wait until 2090 to recover the current highs after the coming fall.

Thus the risk is as great as at some historical tops in the last 100 years.

The chart below shows that the 1929 top in the Dow was not reached in real terms until 2000.

Again, I repeat that this is not a forecast. But it is an epic warning that risk in investment markets are now at a level that investors should avoid.

I fear that sadly very few investors will heed this risk warning.

DON QUIXOTE WOULD HAVE FOUGHT WOKENESS

As the world is being ever more oppressed and controlled by the state, Cervantes’ message in Don Quixote could not be more appropriate.

I am quite convinced that Don Quixote would also have fought against the wokeness that today has become the guideline not only for human behaviour but also for justice.

In the UK last week, a court acquitted four people accused of pulling down a statue of a historical figure who had been a major benefactor of the city of Bristol. Yes, he had made money on the slave trade in the late 1600s but where do we stop rewriting history?

With today’s woke interpretation of history, virtually every historical king, emperor, government leader, general or businessman, to mention a few, should be put on trial even if they are all dead.

For example, Great Britain, France, Spain were all part of invading North America killing a major part of the Indian population and taking their land. So if we rewrite history, shouldn’t all these Europeans as well as the Africans be pulled out of North America and the land handed bank to the Indians.

The same goes for South America of course. The Spanish and the Portuguese must all return and give the land back.

And where do we stop? We should really go back to the Han Dynasty, the Roman, the Mongol, the Ottoman, Spanish, Russian or British Empires.

Why just deal with the slave trade in Africa when all these empires ransacked and conquered major land areas, took slaves and stole the riches of the countries they invaded. In a woke and fair world, all these actions must be reversed too.

If the world decides to rewrite history, it must be done properly with major restitutions. There must of course be a UN Commission, and EU Commission and many more to deal with this properly.

As Don Quixote said: “Who knows where madness lies”.

But it is most probably the total market Madness in the financial world which will have the biggest effect on the world economy in 2022 and onwards.

As I have pointed out many times, the US has not had a budget surplus since 1930 with the exception of a couple of years in the 1940s and 50s. The Clinton surpluses were fake as debt still increased.

But the money and market Madness started in the 1970s after Nixon couldn’t make ends meet and closed the gold window. The US federal debt in 1971 was $400 billion. Since then the US debt has grown by an average of 9% per year. This means that the US debt has doubled every 8 years since 1971. We can actually go back 90 years to 1931 and find that US debt since then has doubled every 8.3 years.

What a remarkable record of total mismanagement of the US economy for a century!

The US has not had to build an empire in the conventional way by conquering other countries. Instead the combination of a reserve currency, money printing and a strong military power has given the US global power and a global financial empire.

Even worse, since the sinister smart coup by private bankers in 1913 to take control of the creation of money, the US Federal debt has gone from $1 billion to almost $30 trillion.

“Permit me to issue and control the money of a nation and I care not who makes its laws”.

And that is exactly what some powerful bankers and a senator decided on Jekyll Island in 1910 when they conspired to take over the US money system through the creation of the Fed which was founded in 1913.

Ever since that time the bankers have helped themselves from the self-filling honeypot.

Controlling the Fed has given the bankers an unlimited supply of money and credit to finance their activities. They have used this to acquire assets around the world as well as power. As is the general rule today, debt is never repaid since new debt always makes the old debt insignificant as the currency is constantly debased with all the new money issued.

The debt issued was not only used for the direct financial gain of the bankers. No debt buys enormous power and by creating money to finance profligate governments, the bankers are also buying power and controlling the politicians.

What a wonderful position as Rothschild made clear almost 200 years ago.

This was the ambitious goal of Don Quixote.

But he didn’t succeed and today’s bankers have a totally different goal which is to make a world of fiat money. And they have been spectacularly successful at it.

But the investors who wish to survive the coming global economic debacle must heed Don Quixote’s words and turn their paper assets into physical gold.

Stocks, bonds and property in coming years will lose at least 90% in real terms against gold.

Gold in US dollars started a bull market in 2001 as the chart below shows. Since then, gold is up every year (sideways 2018) until 2021 when we saw a small correction. Gold’s up cycles normally last at least 10 years. This means that the current leg of the bull market in gold should last at least until 2026 and potentially extend beyond that. 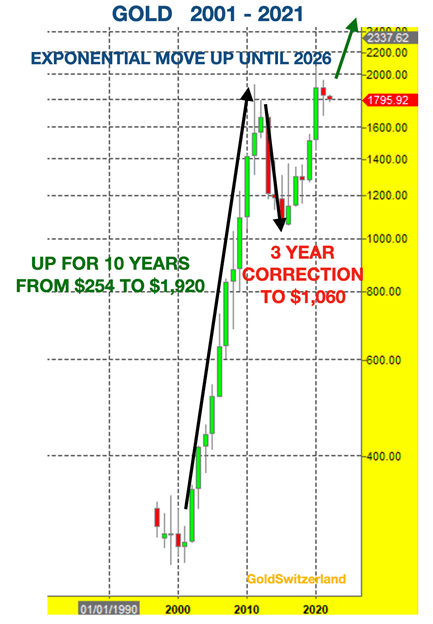 As I regularly point out, gold is extremely cheap in relation to the growth in US money supply. 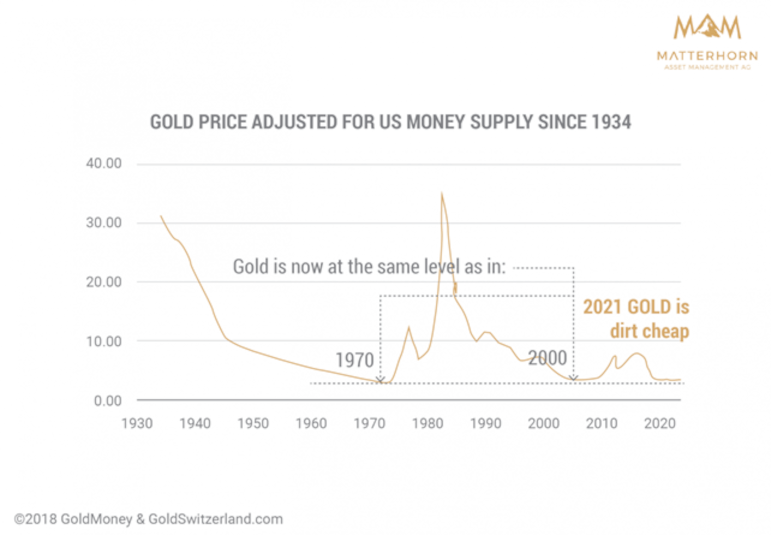 Thus the upside potential for gold is multiples of the current price, especially since the currency debasement will accelerate due to accelerated money printing.

Gold is the king of wealth preservation and should be held in physical form outside the banking system.

Silver is likely to go up 2-3 times as fast as gold and is therefore a fantastic speculative investment as long as it is held in physical form. The risk of holding paper silver is massive since there is virtually no physical silver available. But due to the volatility of silver, investors should hold a much smaller percentage of their financial assets in silver than in gold.

In summary, 2022 could be the year when investors’ wealth turns into ashes, or for the prudent investor, turns into solid gains in gold and silver.