Economic history tells us that we need to focus on two areas to understand where the economy is going – INFLATION AND THE CURRENCY.

These two areas are now indicating that the world is in for a major shock. Very few investors expect inflation to become a real problem but instead believe interest rates will be subdued. And no one expects the dollar or any major currency to collapse.

But in the last two years money supply growth has been exponential with for example M1 in the US growing at an annual rate of 126%!

Von Mises defined inflation as an increase in money supply. The world has seen explosive growth in credit and money supply since 1971 and now we are seeing hyperinflationary increases.

Hyperinflation is a currency event. Just since 2000 most currencies have lost 80-85% of their value. And since 1971 they have all lost 96-99%. The race to the bottom and to hyperinflation is now on. 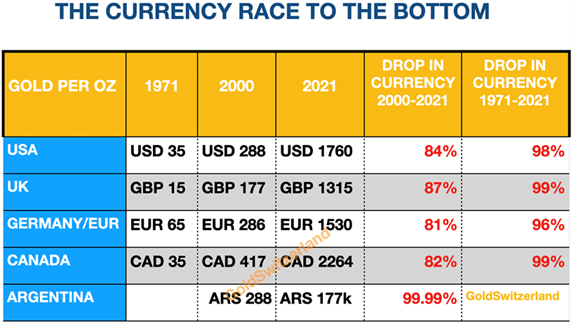 As I will explain in this article, history is telling us that the explosion of credit and money supply will lead to rapid increases in inflation and interest rates and an even faster fall of the US dollar.

When it comes to monetary events, inflation and the currency are totally interdependent.

Sounds pretty simple doesn’t it. But then why has no currency ever survived in history? And why has every economy collapsed when the currency has collapsed?

ECONOMIC & MONETARY CHAOS IS THE RULE RATHER THAN THE EXCEPTION

For anyone who has thoroughly studied economic history, monetary chaos never comes as a surprise.

As long as there has been any kind of money or monetary system, chaos has always followed at regular intervals.

Without chaos there cannot be order. That is the inevitable consequence of economic cycles. But when governments and central banks interfere in the natural cycles of ebb and flow, the world is more likely to have disorder even in the good times and chaos in the bad times. Thus government interference and manipulation distort natural cycles.

So “Doing God’s Work”, as Blankfein, a former Chairman of Goldman Sachs stated in 2009, is likely to lead to constant disorder and chaos.

Cycles, whether they are economic or climate, are normally self-regulating. “Doing god’s work”, whether it involves trying to lower the earth’s temperature or creating fake money, is more likely to create chaos than order.

In ancient Greece, Chaos was originally thought of as the abyss or emptiness that existed before things came into being.

In economic history, chaos is a regular phenomenon. Since no currency has ever survived in history, it follows that the demise of a country’s money is always linked to chaos.

On August 15, 2021, there is exactly 50 years since the beginning of the end of the current monetary system.

Richard Nixon was the unfortunate executor of the inevitable fall of the dollar and the collapse of the US and most probably global economy. As I outlined in my recent article The Dollars Final Crash Down A Golden Matterhorn, we cannot really blame Nixon for the destruction of the dollar.

Profligate spending and monetary discipline are the worst of enemies. For a politician, the mere thought of frugality would never enter their mind.

In order to please the people and either avoid a revolution or the risk of not being reelected, a leader will always choose the easy way out which is creating debt and printing money.

Thus Nixon was in no way unique in going from a gold backed currency to printing whatever fake money was required to continue the illusion of prosperity. As history tells, this is an event that has taken place throughout history at an amazing frequency.

THE PETRODOLLAR HAS DELAYED THE DOLLAR’S TOTAL COLLAPSE

The risk of the dollar collapsing without gold backing was major but Tricky Dick (Nixon) together with his Secretary of State Henry Kissinger had a clever, albeit temporary, remedy for that problem.

They offered Saudi Arabia military protection with the Saudis agreeing to sell all oil in dollars globally. The US would also sell/give Saudi Arabia major quantities of military equipment.

So that was the start of the Petrodollar which has temporarily protected the US dollar currency from crashing to Zero.

But Nixon’s promise to the American people 50 years ago on August 15, 1971 that “Your dollar will be worth just as much tomorrow” hasn’t quite held true to say the least.

Yes, one dollar is still one dollar. But in purchasing power terms it is only worth 2 cents today compared to 1971. So in half a century, the dollar has lost 98% of its value compared to real money i.e. GOLD.

But the real collapse of the dollar has not started yet in spite of the 98% fall since 1971.

US MONEY SUPPLY IS GROWING EXPONENTIALLY

Since the Great Financial Crisis in 2006-2009, there has been an exponential growth in US Money Supply.

From 1971 to 2011 the growth seems modest at a compound annual growth (CAGR) of 6%. If the dollar purchasing power declined by the same rate, it would lead to prices doubling every 12 years. Or put in other terms, the value of the currency on average would drop by 50% every 12 years.

Then from 2011 when Money supply started growing in earnest, M1 has grown by 24% annually. This means that prices in theory should double every 3 years.

Finally, from August 2019 to August 2021 M1 has gone up by 126% a year. If that was translated to the purchasing power of the dollar it would lead to prices doubling every 7 months.

Von Mises defined inflation as growth in money supply and not in prices. The Western world until now has experienced very little consumer price inflation. Instead the credit expansion has created exponential inflation in asset prices.

I experienced how asset inflation in the UK in the late 1960s and early 1970s led to price inflation with the collapse of the UK stock market and the pound.

Another remarkable move in the 1970s which I experienced was gold going form $35 in 1972 to $850 in 1980. In my view that exponential move will be dwarfed by what we will experience in the next few years.

As the chart below shows, inflation in the UK went wild in the 1970s. I experienced the perfect combination of a collapsing currency and surging prices. The average inflation was around 15% for 6-7 years in the 70s. Mortgage rates went to levels that would make all borrowers bankrupt today. The interest rate on my first mortgage was 21%!

As the graph shows, annual inflation was 1% for 171 years and has averaged 5.5% since then – a 5 x increase! We must thank Nixon for that!

THE GOLD PRICE RISE HAS ONLY STARTED

As I have pointed out in many articles, the gold price is currently not reflecting the massive debt expansion and money printing that the world has experienced, especially since 2006. 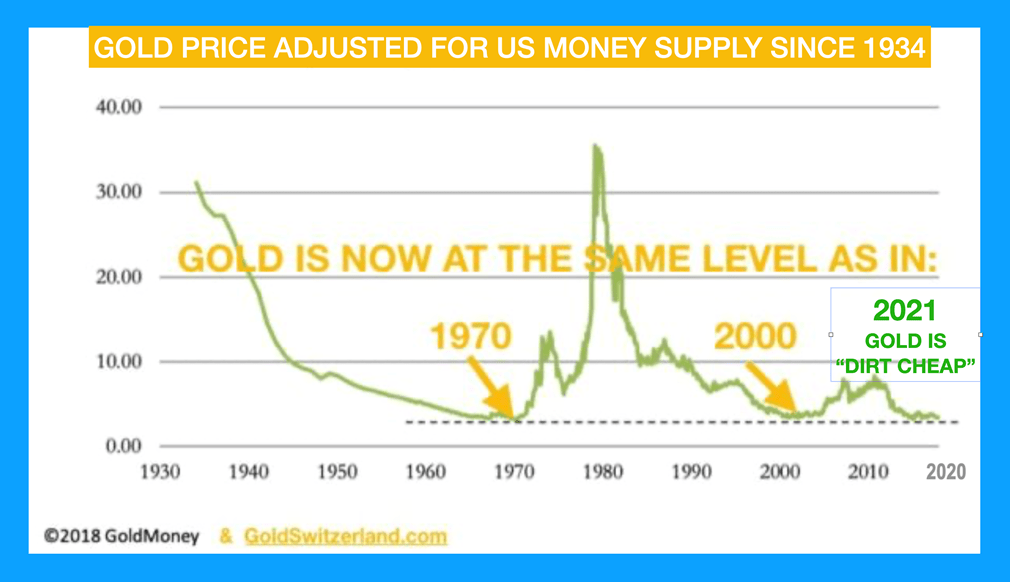 Skilful but deceitful manipulation, through the issuing of uncovered paper gold, by the BIS and bullion banks has so far kept gold well below its intrinsic value, measured in dollars.

The short term relationship between money supply and inflation is not straight forward but the long term effect on inflation is inevitable.

So the fact that money supply is increasing much faster than the decline of the dollar is only a temporary disconnect.

As money supply continues to grow exponentially, leading to chaos in the US as well as in the global economy, we will soon see the dollar reaching the abyss as the Greeks defined chaos.

The dollar has outstayed its usefulness as sound money and will soon be in the graveyard where every single currency in history has ended up.

It would be very brave of anyone to doubt or deny the demise of the dollar.

The dollar collapse into the abyss will happen. Take my word for it. Anyone betting against thousands of years of history would be a fool.

Yes, I do know that the world is full of fools who believe that it is different today. But it never is. History has a 100% success record when it comes to the total destruction of every currency that has ever existed. I obviously exclude eternal money in the form of gold or silver.

What we are seeing now is what von Mises called the Crack-up-Boom.

Von Mises defined a crack-up-boom as:

So I dare anyone to bet against a perfect history record as regards a currency collapses and the imminent demise of the dollar.

The only question is how long it will take before the dollar loses another 98% from here. It has taken 50 years to lose the first 98% but losing another 98% or more from here is likely to go much faster.

It could take 5 years or maybe 10 but I fear that it could be very quick. History also tells us that once hyperinflation takes hold, it develops very quickly. It could all be over in 2-3 years.

But although the collapse of the currency can be very quick, the effect on the economy and the financial system can last for years or even decades when, as in this case, we are dealing with a global explosion of debt.

In the next 5-10 years, precious metals will vastly outperform all asset classes in real terms.