Gold’s impressive advance in 2019 -- aided by trade war frictions, easier monetary policy across the world’s leading economies and sustained central-bank buying -- may be set to spill into the new decade.

As 2020 looms, BlackRock Inc., the world’s largest money manager, remains constructive on bullion as a hedge, while Goldman Sachs Group Inc. and UBS Group AG see prices climbing to $1,600 an ounce -- a level last seen in 2013. 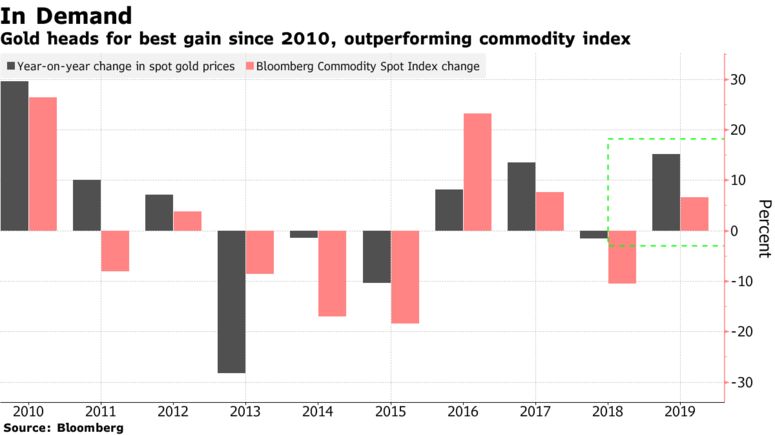 Bullion is heading for the biggest annual advance since 2010, outperforming the Bloomberg Commodity Spot Index, as a year dominated by trade war vicissitudes and a trio of Federal Reserve interest rate cuts propelled the traditional haven to the forefront. Still, with global equities remaining buoyant and the U.S. labor market proving resilient, gold’s outlook isn’t clear cut due to uncertainty over what central banks will do in 2020.

“Economic growth and inflation remain moderate and central banks continue to lean toward accommodation,” said Russ Koesterich, portfolio manager at the $24 billion BlackRock Global Allocation Fund. “In this environment, any shocks to equities are likely to come from concerns over growth and, or geopolitics. In both scenarios, gold is likely to prove an effective hedge.”

Geopolitical and economic risks are likely to feature in 2020 just as they did this year, which could support gold: a phase-one trade accord between the top two economies may be close, but the U.S. has pledged to impose tariffs on more imports if a deal isn’t struck by Dec. 15. 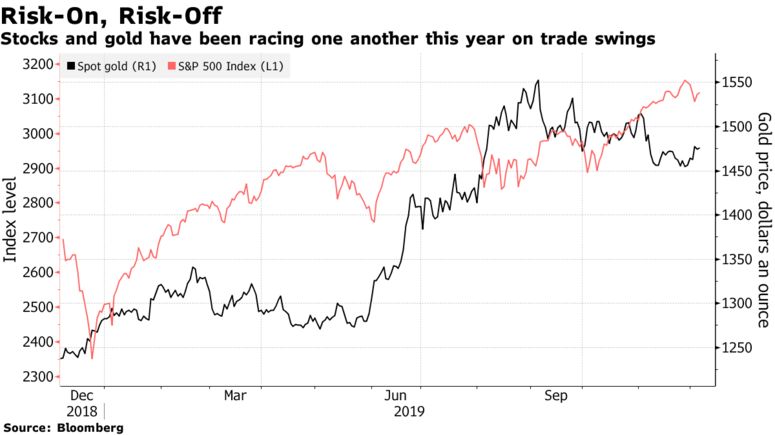 The U.S. presidential vote looms in November, and before that there is the possible impeachment of the incumbent. Donald Trump has said many different things on the trade war, his stance shifting week to week, including recent remarks he likes the idea of waiting until after the polls to sign a deal.

“Who knows what the U.S. president does next, he has surprised us many times,” said Giovanni Staunovo, a commodity analyst at UBS Wealth Management. “We also have the presidential elections, so expect more volatility, more noise in the market.”

While gold has been buoyed by the ongoing trade war, risk assets like U.S. equities are also finding support from optimism about a breakthrough, begging the question which one will prevail and which one is due for a pullback. Invesco Ltd.’s Kristina Hooper, who sees prospects for a 5% to 8% gain in gold next year, thinks stocks will outshine bullion.

But should there be economic weakness in 2020, stocks will decline and the Fed will likely resume lowering rates, boosting non-interest yielding bullion, according to Chris Mancini, an analyst at the Gabelli Gold Fund.

The Fed has signaled a pause on easing after cutting rates from July to October by three-quarters of a percentage point as growth deteriorated, business sentiment was hurt by uncertainties over trade, and inflation remained below target. 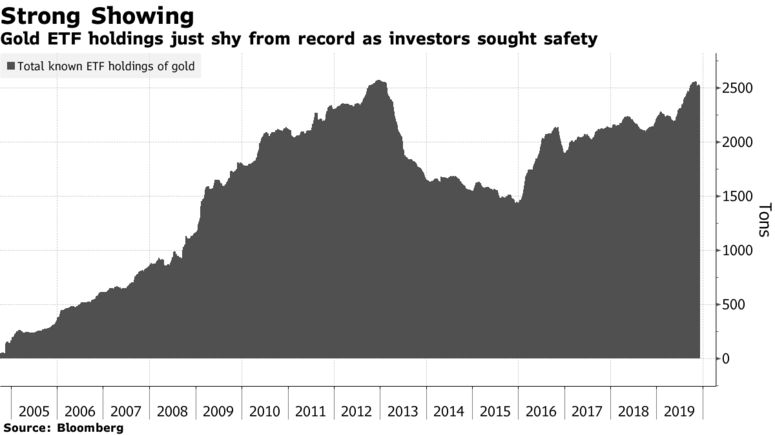 While most see a prolonged pause from the Fed, there are dissenters. Another two cuts are expected in the first half, according to BNP Paribas SA. The low-yield environment, along with the anticipated weakening of the dollar and likely reflation policies, will continue to support gold, the bank said this month.

Bullion buying by governments has emerged as an important pillar of demand, including purchases by China. Central banks are consuming a fifth of global supply, signaling a shift away from the dollar and bolstering the case for owning gold, according to Goldman.

“I am going to like gold better than bonds because the bonds won’t reflect that de-dollarization,” Jeff Currie, head of global commodities research at Goldman, told Bloomberg Television on Monday.

There are voices of caution, at least near term. Gold is seen averaging $1,400 in the first quarter even though the longer-term outlook looks solid, says ABN Amro Bank NV strategist Georgette Boele. If risk assets continue to rally, investors should buy the gold dip, targeting fresh, cyclical highs by the end of 2020, Citigroup Inc. said.

“Gold cannot fully replace government bonds in a portfolio, but the case to reallocate a portion of normal bond exposure to gold is as strong as ever,” Goldman analysts including Mikhail Sprogis said in a note. “We still see upside in gold as late-cycle concerns and heightened political uncertainty will likely support investment demand” for bullion as a defensive asset.