The current high inflation could theoretically transform into hyperinflation, disinflation, stagflation, or deflation. What does each mean for gold?

From the logical point of view, there are three options. Inflation rates could accelerate further, leading to hyperinflation in an extreme case. They could remain more or less the same, resulting possibly in stagflation when the pace of GDP growth decelerates. And, finally, the rates of annual changes in the CPI could slow down, implying disinflation, or they could even become negative – in this scenario, we would enter the world of deflation. So, which of these “flations” awaits us?

Although some commentators scare us with the specter of hyperinflation, I would reject this variant. Surely, the inflation rate at 5% is relatively high, but it’s not even close to 50%, which is an accepted hyperinflation threshold. We also don’t see people getting rid of depreciating money as quickly as possible – instead, the demand for money has been rising recently (or, in other words, the velocity of money has been decreasing).

It’s also worth remembering that hyperinflation usually occurs when fiscal deficits are financed by money creation, especially when the government cannot raise funds through borrowing or taxes, for example because of a war or other sociopolitical convulsions. Sure, the budget deficits are partially monetized, but we are far from the situation in which the US government would be unable to collect taxes or find lenders ready to buy its bonds. Hence, gold bugs counting on hyperinflation may be disappointed – but I doubt that they would really want to live during the collapse of the monetary system.

The opposite scenario, i.e., deflation, is also unlikely. To be clear, asset price deflation is possible if some of the asset bubbles burst, but the absolute declines in the consumer prices, similar to those observed during the Great Depression, or even the Great Recession, are not very probable. The broad money supply is still increasing rapidly, the fiscal policy remains easy as never, and the Fed remains ultra-dovish and ready to intervene to prevent deflation. For deflation to happen, we would need to have the next global financial crisis which would severely hit the aggregate demand and oil prices.

Although there are significant vulnerabilities in the financial sector, it’s definitely too early to talk about significant deflation risks on the horizon. As with hyperinflation, this is bad news for gold, as the yellow metal performs well during the deflationary crises (although at the beginning, people usually collect cash, disposing of almost all assets).

So, we are left with two options. Inflation will either diminish to its previous levels (maybe to slightly higher readings than before the pandemic), and we will return more or less to the Goldilocks economy, or inflation will stay relatively high (although it may subside a bit), while the economic growth will slow down significantly (and more than inflation). It goes without saying that the latter option would be much better for gold than the former one, as gold doesn’t like periods of decelerating inflation rates and of a decent pace of economic growth (remember 1980 and the 1990s?). So, could gold investors reasonably ask whether we will experience disinflation or stagflation?

Well, the Fed believes that the current high inflation readings will prove to be temporary and we will return to the pre-epidemic era of low inflation. But you can’t step in the same river twice, and you can’t step in the same economy twice. You can’t undo all the monetary and fiscal stimulus nor the surge in the broad money supply and the public debt (see the chart below). 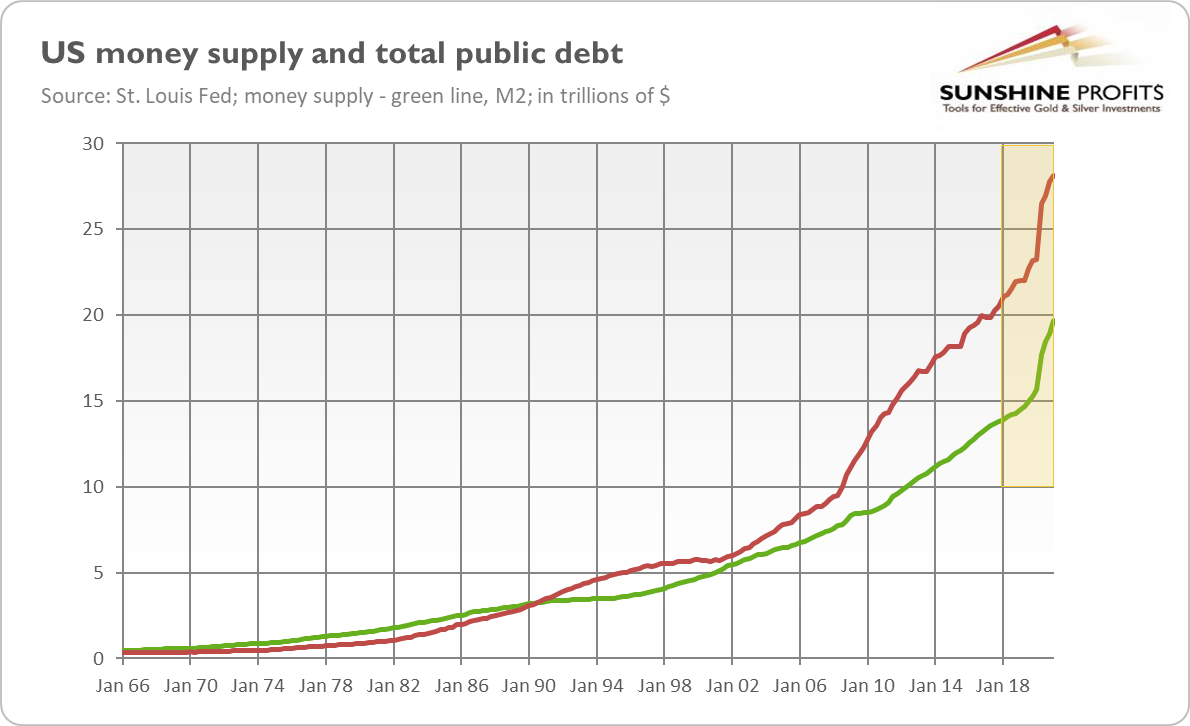 So, the pre-pandemic low inflation readings are not set in stone. And the impact of some deflationary forces could be exaggerated by the central bankers and the pundits – for example, the recent ECB research shows that “the disinflationary role of globalization has been economically small”.

Hence, I worry about stagflation. And I’m not alone. The results of the latest biannual survey of the chief U.S. economists from 27 financial institutions for the U.S. Securities Industry and Financial Markets Association also highlight the risks of high inflation and stagnation. They reveal that 87% of respondents consider “stagflation, as opposed to hyperinflation or deflation, as the bigger risk to the economy.”

Actually, the GDP growth is commonly projected to slow down significantly next year. For example, according to the recent Fed’s dot-plot, the pace of the economic growth will decline from 7% in 2021 to 3.3% in 2022. It’s still fast, but less than half of this year’s growth. And it’s likely to be slower, as the FOMC members tend to be overly optimistic.

The stagflation scenario could be positive for gold, as the yellow metal likes the combination of sluggish (or even negative) growth and high inflation. Indeed, gold shined in the 1970s, the era of The Great Stagflation. Of course, there are important differences between then and now, but the economic laws are immutable: the mix of easy fiscal policy and monetary policy superimposed on economic reopening is a recipe for overheating and, ultimately, stagflation.

However, so far, the markets have bet on transitory inflation. Moreover, they are focused on fast economic expansion and the Fed’s hawkish signals. But we could see more uncertainty later this year when higher interest rates and inflation hamper the economic activity. In that case, gold could get back on track.