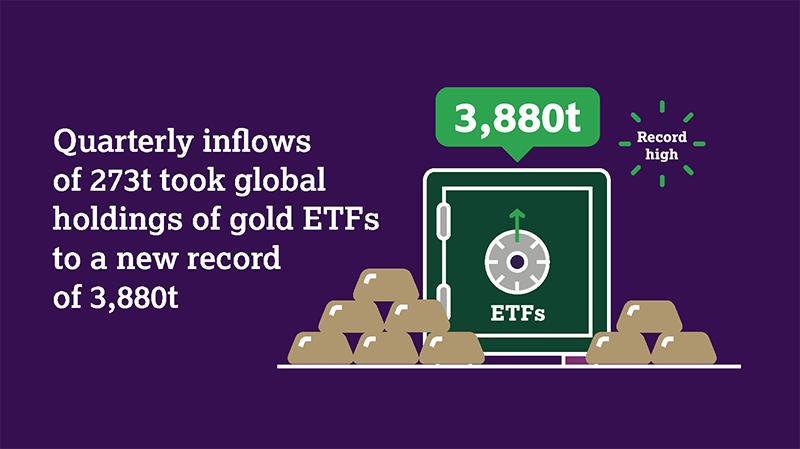 While the pace slowed from H1, sustained inflows in Q3 demonstrated the motivation of investors globally to add to their holdings.

Although jewellery demand improved from the Q2 record low, the combination of continued social restrictions, economic slowdown and a strong gold price proved onerous for many jewellery buyers: demand of 333t was 29% below an already relatively anaemic Q3 2019.

By contrast, bar and coin demand strengthened, gaining 49% y-o-y to 222.1t. Much of the growth was in official coins, due to continued strong safe-haven demand in Western markets and Turkey, where coins are the more prevalent form of gold investment. Q3 also saw continued inflows into gold-backed ETFs, although at a slower pace than in the first half. Investors globally added 272.5t to their holdings of these products, taking y-t-d flows to a record 1,003.3t. 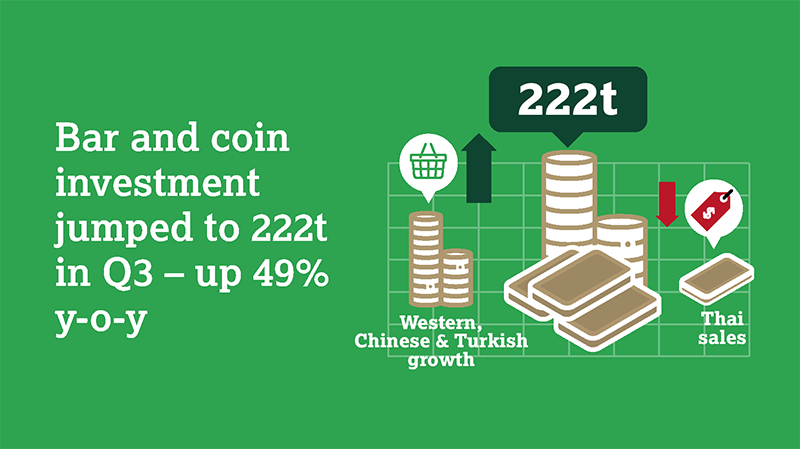 Retail investment was particularly strong in western markets, China and Turkey, in contrast with continued sales in Thailand.

Central banks generated small net sales of gold in Q3, the first quarter of net sales since Q4 2010. Sales were generated primarily by just two central banks – Uzbekistan and Turkey – while a handful of banks continued steady albeit small purchases. 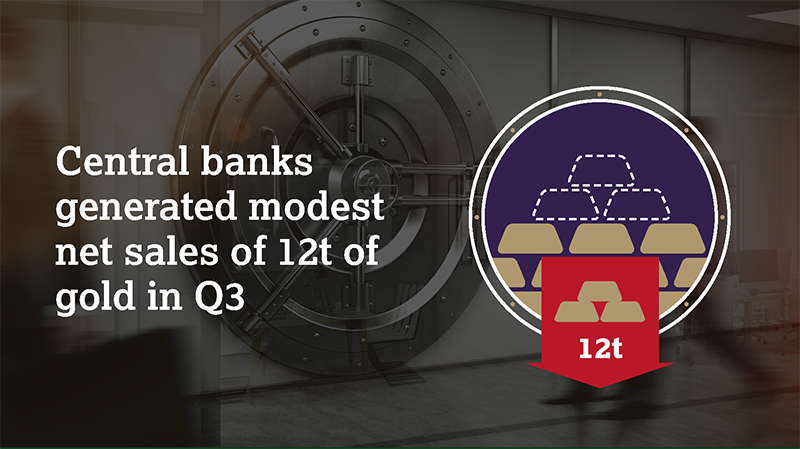 This was the first quarter of net sales since Q4 2010, as smaller purchases were outweighed by sales from mainly two central banks.

Demand for gold used in technology remained weak in Q3, down 6% y-o-y at 76.7t. But the sector saw a decent quarterly improvement as some key markets emerged from lockdown.

The total supply of gold fell 3% y-o-y in Q3 to 1,223.6t, despite 6% growth in gold recycling, with mine production still feeling the effects of the H1 COVID-19 restrictions. 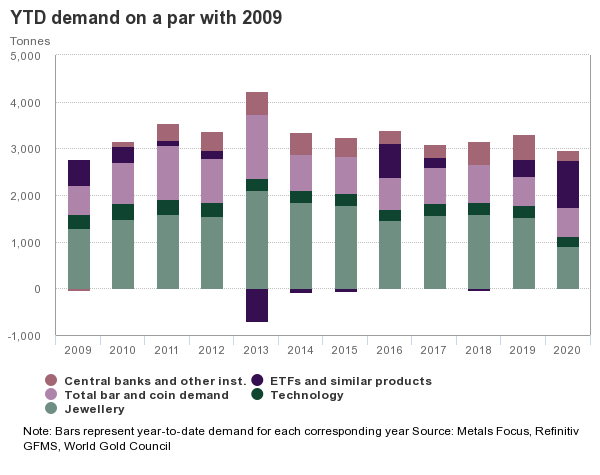 Quarterly inflows of 272.5t took global holdings of gold-backed ETFs (gold ETFs) to a new record of 3,880t. While the pace slowed a little from H1, sustained inflows throughout Q3 demonstrate the continued motivation of ETF investors to add to their holdings.

The US dollar gold price rose to a record high of US$2,067.15/oz in early August. This was followed by a correction with the price closing the quarter around US$1,900/oz. Record high prices for gold were also seen in various other currencies, among them the rupee, the yuan, the euro and sterling.

Bar and coin investment jumped to222.1t in Q3 – up 49% y-o-y. Most major retail investment markets saw strong growth though the largest volume increases were seen in Western markets, China and Turkey. This contrasted with continued strong sales in Thailand.

The pandemic further impacted the jewellery sector. Weakness caused by COVID-19 was compounded by record gold prices: Q3 demand fell 29% y-o-y to 333t. While China and India accounted for the largest volume declines, weakness was global.

Central banks generated modest net sales of 12t of gold in Q3. This was the first quarter of net sales since Q4 2010, primarily due to concentrated sales by two banks. Buying continues at a moderate pace, driven by the need for diversification and protection amid the negative rate environment.