We have for some time warned investors that the era of the dollar as a reserve currency is coming to an end soon and that the strongest and safest currency is gold. All currencies are hopelessly declining in value against gold and this trend will accelerate in the next few months and  years, starting now.

Voltaire’s statement from 1729 that “All paper money eventually returns to its intrinsic value – ZERO” is now ringing as true as ever. We show in the graph below the decline of major currencies against gold since 1900. The US dollar,  Euro (DM),  Pound and Yen have all declined between 93% and 99%  against gold in the last 109 years. With the money printing soon reaching Zimbabwean proportions it will not be long until many paper currencies will reach their intrinsic value or in other words become worthless. 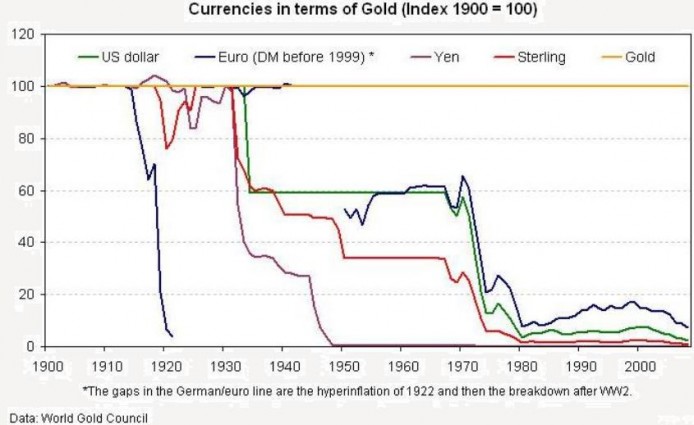 So what should we trust the most – the natural stability of gold or clueless  governments who destroy the value of their people’s money?

The money printing gives short term gratification to the people/voters and the illusion that they are better off when in fact all they have is more debt and a depreciating currency.  But the group that really benefits are the financiers/speculators.  Money printing combined with massive  credit growth  enables the financiers to create enormous fortunes. This gives them leverage over the government who needs their wealth to stay in power.  It becomes a process of collusive back scratching between power hungry politicians and greedy financiers.

Currently circa 0.6% only of global assets or $785 billion is invested in gold. At current prices $785 billion represents 10 years’ gold production.  It would not be surprising to see an increase in asset allocation to gold from 0.6% to 2-3% in the next few years. Currently, virtually no asset manager,  pension fund or investment fund buys gold.  This will change.
Most central banks have now stopped selling gold and some are buying actively like China and Russia. IMF might sell some gold 2009-10 but this would be picked up by China. Gold production is declining and the world produces  five times more gold annually than it discovers thus depleting reserves. The only increase in supply will come from scrap gold (mostly jewellery) but this will be nowhere near sufficient.

An increase in asset allocation to gold from 0.6% to 2% would involve additional investment in gold of almost $2 trillion. At current prices this would mean 60,000 tons of gold which is 24 years production!

Thus, it is evidently clear that a major increase in investment demand, which is bound to come, can never be satisfied with gold at current prices. It can only be satisfied with gold at substantially higher prices. Therefore, gold is likely to increase manifold from here in real terms and substantially more in inflationary or hyperinflationary terms.