Someone asked, 'why would there be a desire to do a stealth confiscation of gold from the public holdings in ETFs and private stores through price manipulation?' Who could have been assigned the task of prying bullion out of the hands of the people, and for what conceivable reason? It appears to be happening, but why?

There are any number of possible reasons. Concerns that an innovative new round of QE and money creation might create a run on the gold price is one possibility. There should be little doubt in those who look into the evidence that central bankers are quite sensitive to gold and silver as alternative currencies and reflections of their own policy initiatives.

And that is quite possible. As I have pointed out, there is some precedent for it. In 1933 Franklin Roosevelt pulled back much of the publicly held gold in the US. And after this was done, the government revalued the gold from $20 to $35 overnight, and then used the gains to recapitalize the banking system.

Although this could happen again, it does not seem likely because it flies in the face of everything the central bank has achieved by putting the US on a purely fiat money regime, the last gold ties being severed by Nixon in the 1970s. They prefer to denigrate gold, even though they still hold it, and certainly speak about it quite a bit often through their intermediaries.

There is definitely a movement to revisit the Bretton Woods Agreement that established the dollar as the world's reserve currency. The BRICs, whose economic power is ascendant, are seeking to establish a new currency for global trade that is owned by no single central bank or entangled in the domestic policies of no single country. And they wish to add gold and possibly silver to that mix. And they are in the process of acquiring substantial reserves to accomplish it.

The Anglo-American banking cartel is resisting this movement with all their diplomatic and political might. One of the sensitivities of the recent spying scandal leaks is the concern that they may be trying to obtain intelligence that could be used in these negotiations which are ongoing, very quietly behind the scenes.

But one has to ask, 'what set off the firestorm of price manipulation against gold that started at the beginning of this year?' Unless one is a shill, or naïve about markets, the market operation to knock the price of gold, and also silver, down is fairly obvious and heavy handed. They are not even trying to hide it. Traders do not dump hundreds or even thousands of contracts at market in quiet periods with any other objective than to take the price down. It really is that simple.

My initial take on this was that this was part of the 'price-setting' negotiation for gold and silver in the basket of currencies that the BRICs are developing. But that seemed a bit thin, unless it was seen as a 'last stand' against including gold and silver by making the argument that they were too volatile.

So I looked back on the chart for what I saw was the pivotal moment, and then checked the news and tried to find some event that may have served as the impetus for it. And the truth of it was staring me right in the face.

How remarkable is it that Germany, at the urging of their citizens and despite the objections of their central banks, has requested the return of its sovereign gold from its custodial storage in New York? And that the Feds said, no. You can't have it, but we will be in position to return your own property in seven years time.

What was up with that? Venezuela had recently requested its gold to be returned, and that helped to push the price of gold up to its all time high, because the request had obviously been floated before it became public knowledge.

So why couldn't Germany have the return of its own property for seven years?

Think about this. And perhaps what is happening now will become more clear. It is all a part of the credibility trap, wherein past actions of officials must be hidden in order to protect careers and ensure the orderly functioning of the status quo, even to its own eventual detriment.

Oh this is wrong? This is some weird theory? Well I admit that part of the problem is that we are left to guess what the central banks and the markets are doing with our money and property far in excess of what might be expected in democratic societies. This is the failure of regulation and oversight, and the corrupting power of big money in politics.

But, ok. If this is just some distraction, then give Germany back its gold, in full, this year.

If you wish to prove your word is good and facts are straight, give Germany back its gold.

And if you wish to restore some level of confidence in the markets, make them more transparent and open so people can conduct their business efficiently and safely without fear of being cheated and defrauded at every turn.

If you wish the trust and respect of the world, redeem what you have pledged to hold in trust.   If you have taken some actions in the past that were made in good faith and for good reasons, but may have gone too far or turned out badly in retrospect, make good on them now.   The way to stem a scandal is to bring the truth to light.  It is never the initial act that brings down government, but the subsequent attempt at coverup that obtains a life of its own.

Prove your full faith and credit to be worthy.  Fulfill your oaths.  Tear down the wall of secrecy that divides the people from their government. End this before it can go any further.

"Oh what a tangled web we weave when first we practice to device." 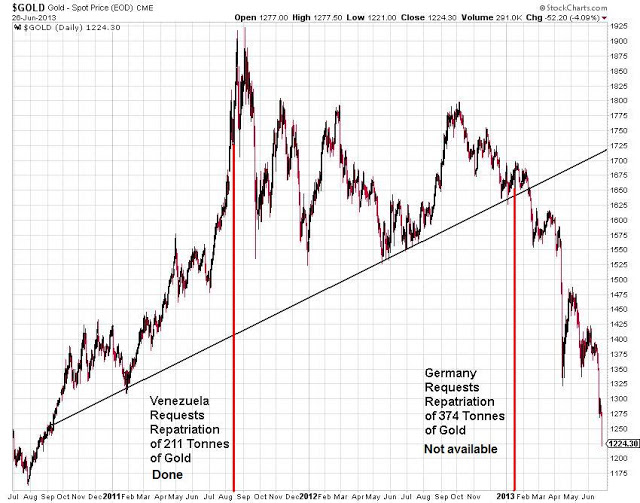