Is Deutsche Bank Another Lehman Brothers?

As is perhaps to be expected, Deutsche Bank are keen to underplay their ongoing problems, dismissing speculation that they are “another Lehman Brothers”. But is it right to deny such claims, and are the experts right on this matter?

The last couple of years have been very difficult for Deutsche Bank. This German-based banking group have a global reach and are one of the most powerful banks in the world. But that reach shortened and that power dwindled in 2014 when they were forced to raise $1.5 billion to support capital. Just a few weeks later, Deutsche Bank announced that they would be selling billions of euros worth of stock, all at a sizable discount.

This raised many eyebrows, with the industry wondering what was amiss at Deutsche Bank. This year, things have worsened for them. They were forced to pay a sizable fine following the LIBOR scandal and after Greece defaulted on its debt, they were one of the ones to be hit the hardest.

In June, Deutsche Bank was downgraded by S&P, given a “BBB” status, which is just a few points above “junk” status. And this is where many of the comparisons are drawn, because Lehman Brothers was also downgraded prior to its collapse, and the grade that it was given was actually higher than the BBB now attached to Deutsche Bank.

Is This Another Lehman Brothers?

A lot of what has happened at Deutsche Bank has been hidden from the public eye and we still don’t really know the extent of the issues that this bank are facing. What we do know, however, is that a collapse of Deutsche Bank could do more damage than the Lehman Brothers collapse.

When Lehman Brothers filed for bankruptcy in 2008, they triggered a global financial recession, and we’re still reeling from the impact of that 8 years later. Lehman Brothers was big, which is why its impact was so widespread, but Deutsche Bank is bigger. Much bigger.

To give you an idea of just how big it is, Lehman Brothers had assets of around $700 billion prior to its collapse, with just over 26,000 employees working for them. Deutsche Bank, on the other hand, have assets of more than $1,7 trillion, with nearly 100,000 staff on their payroll. Based on these statistics, Deutsche Bank is a good three to four times bigger than Lehman Brothers.

As a result, a collapse in Deutsche Bank could trigger a much bigger financial fallout than the one that Lehman Brothers triggered. So, maybe the deniers at Deutsche Bank are right. This is not another Lehman Brothers, because it has the potential to be much, much worse. 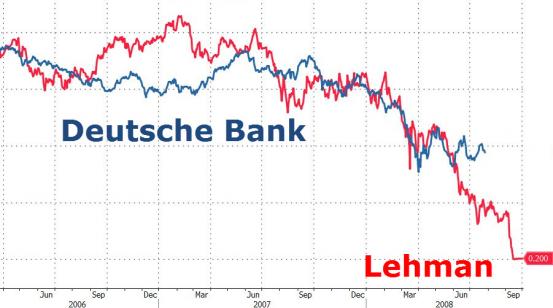