Powell admits that inflation is well above the Fed’s target, but he still considers it transitory. Gold increased in response – only to fall again.

Last week, Powell testified before Congress. On the one hand, Powell admitted in a way that inflation had reached a level higher than expected and is above the level accepted by the Fed in the longer run:

"Inflation has increased notably and will likely remain elevated in coming months before moderating."

It means that the Fed was surprised by high inflation, but it doesn’t want to admit it explicitly. Instead, Powell admitted that inflation would likely stay at a high level for some time. The obvious question here is: why should we believe the Fed that inflation will really moderate later this year, given that the US central bank failed in forecasting inflation in the first half of 2021?

What’s more, Powell acknowledged that he hasn’t felt comfortable with the current level of inflation:

"Right now, inflation is not moderately above 2%; it is well above 2%. The question is, where does it leave us six months from now? It depends on the path of the economy."

It means that, at some point in the future, if high inflation turns out to be more persistent than expected, the Fed will act to bring inflation back to lower levels. However, nobody knows when exactly it could happen – and I bet that, for political reasons, it would happen rather later than sooner.

Indeed, even though inflation turned out to be higher than previously thought, Powell downplayed the danger of rising prices, reiterating the view that inflation is transitory. In particular, Powell maintained that recent price hikes were closely related to the post-pandemic recovery and would fade after some time:

"The high inflation readings are for a small group of goods and services directly tied to reopening."

I dare to disagree. It’s true that the hike in the index for used cars accounted for one-third of the June CPI jump. But two-thirds of 5.4% is 3.6%, still much above the Fed’s target! Anyway, in line with its narrative, the Fed doesn’t see a need to rush with its tightening cycle. After all, the US labor market is – according to Powell and his colleagues from the FOMC – still far from achieving “substantial further progress”, with 7.5 million jobs missing from the level seen before the start of the pandemic. So, the tapering of quantitative easing is – as Powell noted – “still a ways off”. So, overall, Powell’s remarks were dovish and positive for the yellow metal.

What does Powell’s recent testimony imply for the gold market? Well, the yellow metal initially rose after his appearance in Congress. This is probably because investors bought the narrative about transitory inflation and decided that monetary taps would stay open for a long time and tapering would start later than investors expected in the aftermath of the recent dot-plot. The rising cases of the Delta variant of the coronavirus is another reason why investors could bet that the Fed would maintain its accommodative monetary policy. So, the bond yields declined, while the price of gold increased as the chart below shows. 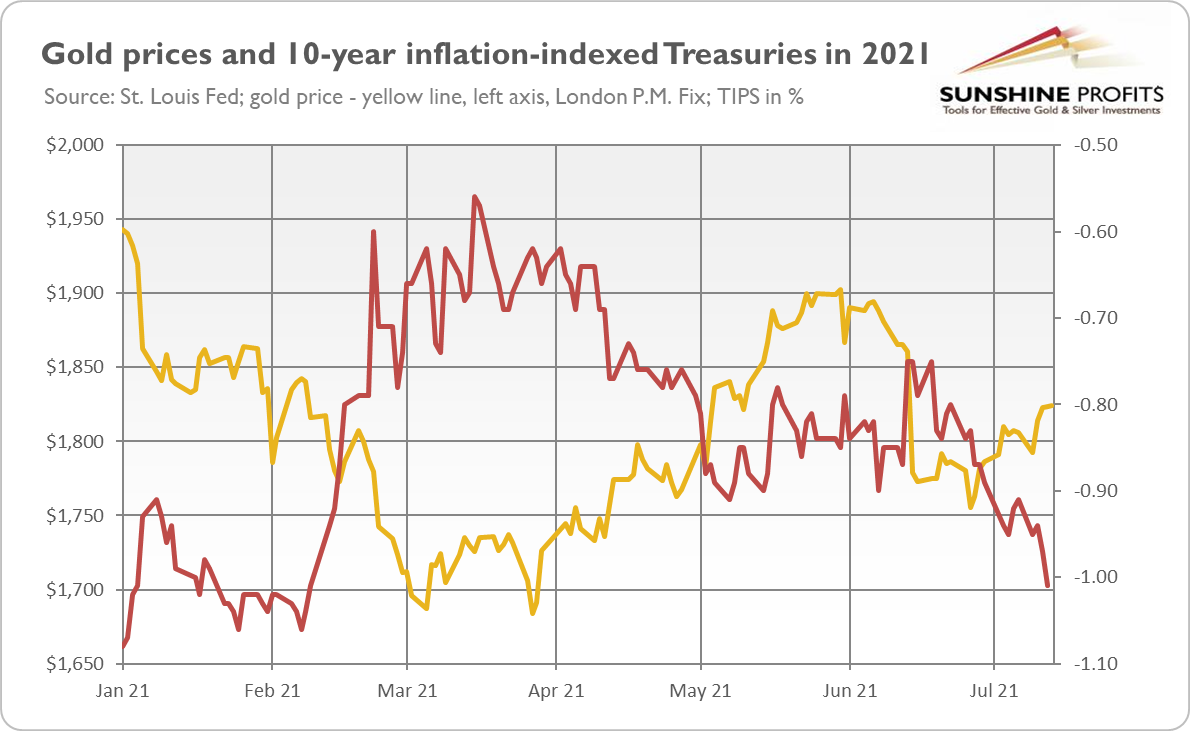 However, gold’s reaction was disappointingly soft given the dovishness of Powell’s remarks, and the yellow metal declined again later last week amid some better-than-expected economic data. It seems that there is hesitancy among precious metals investors about whether or not to take a more decisive step with purchases of gold. The reason is probably that, sooner or later, the interest rates will have to rise in response to inflation. It means that the opportunity costs of holding gold will increase, exerting some downward pressure on gold.

Nevertheless, the real interest rates should remain low, so gold prices shouldn’t drop like a stone. Actually, in the longer run, when inflation creates some economic problems while the economic growth slows down, the yellow metal could finally benefit from the stagflationary conditions.