Russia and China are dumping their US Treasury debt holdings amid Washington's sanctions and tariff spree.

In April, Moscow sold nearly a half of its holdings of US debts, reducing them from $96.1 billion to only $48.7 billion. For comparison's sake, Russia's investments in US bonds exceeded $150 billion in 2013.

According to Elvira Nabiullina, the Bank of Russia governor, the financial institution takes into consideration all possible risks, including geopolitical ones, when it comes to the diversification of the country's gold and foreign exchange reserves.

"We have increased the share of gold last year, we are diversifying the foreign exchange part [too]," Nabiullina noted, speaking at the Russian State Duma on June 19.

For its part, Beijing, the largest foreign owner of Treasuries, cut its holdings by $5.8 billion to $1.18 trillion.

However, Russia and China were not the only foreign countries losing appetite for US bonds, bills and notes: Japan has diminished its Treasuries by $12.3 billion to $1.03 trillion. Ireland, the UK and Switzerland followed suit.

Bloomberg pointed out that "foreign ownership of Treasuries receded in April, falling to $6.17 trillion." Meanwhile, the US national debt continues to grow, mounting over $21 trillion.

According to observers, Russia's moves are quite understandable given the new batch of anti-Russian sanctions announced in April and June 2018.

Besides, the decrease in US debt holdings diminishes Russia's dependence on the US dollar. Instead, Moscow is boosting its bullion reserves.

In mid-March 2018 the Central Bank announced that Russia's gold reserves had reached $455.2 billion between March 2 and 9.

"Our international reserves increased by $2.9 billion or 0.6 percent in a single week, mainly on the strength of positive re-evaluation," the regulator stressed.

According to the World Gold Council, Russia not only lists among the largest official buyers of the precious metal but is also ranked third among the world's biggest producers of gold.

The accumulation of gold is a protection against currency risks, insurance against sanctions, and, of course, the opportunity to earn. 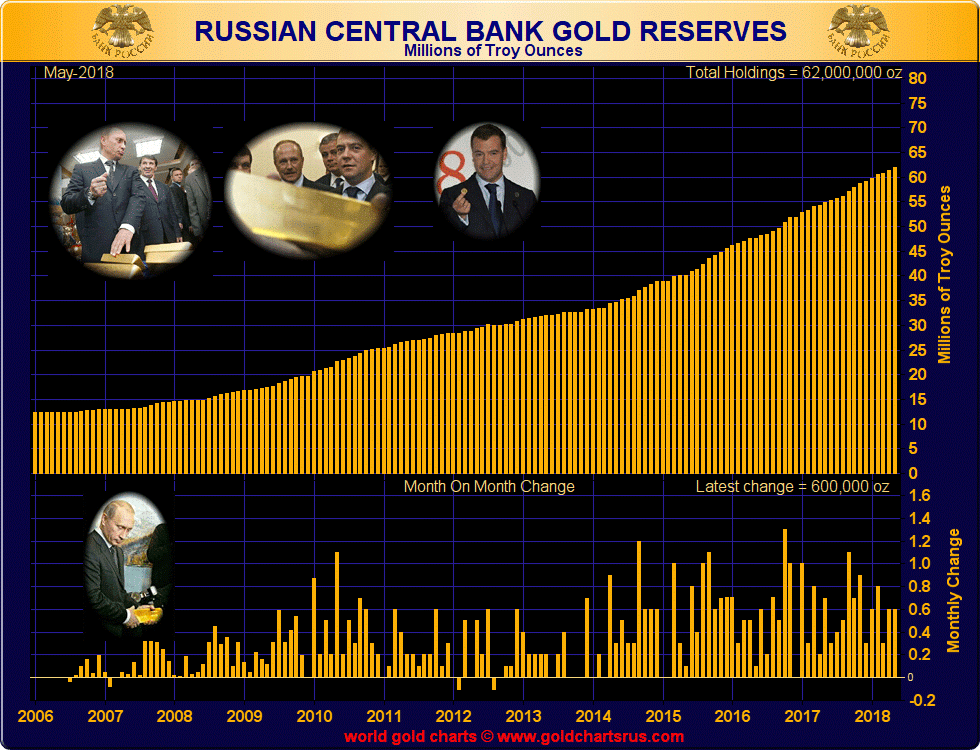 Meanwhile, China may potentially weaponize its US Treasuries in an attempt to contain the Trump administration-driven tariff war.

Speaking to Bloomberg, Zach Pandl, co-head of global FX strategy at Goldman Sachs noted on June 15 that so far, Washington does not see "any evidence that China's using its Treasuries as part of the trade negotiations."

On June 15, the White House imposed 25-percent tariffs on $50 billion in Chinese imports. Beijing immediately responded in a tit-for-tat manner, which prompted the Trump administration to raise the stakes and announce on June 18 that it will introduce tariffs on another $200 billion in Chinese goods and will continue the fight if Beijing retaliates.

As for Washington's European allies that are getting rid of their US debt holdings, it could be prompted by growing concerns among EU member states about Trump's trade policies and anti-Iranian sanctions, which have already hit some major European companies.

In general, the looming US-Chinese trade war may finally prompt Beijing to dump American treasuries, given the fact that in 2017, China was reducing its exposure to US Treasuries over six months. Observers do not exclude that Beijing may use it as a last resort. As a result, the US dollar may suffer a serious status loss and come one step closer to losing its leadership in the world financial system.