So what’s new in the States? The recovery... which needs more and more time to become a reality. Judge by yourself : Growth in the first quarter plummeted to a meager 0.1%. The explanation from official sources? Snow... Yes, the stuff that falls in winter. They say that, this year, there was a little more than usual, keeping Americans at home and away from the stores... As if Americans were using dogsleds to travel! The credulous who believe such an explanation can keep their stock shares, but others will start to ask themselves some serious questions.

We’ve often stated here that there is no self-entertained recovery in the USA, but rather only bubbles and « wealth effects » caused by the Fed’s QE plans, and nothing else. The dynamism of innovation or shale gas (with revised lower estimates) exploitation are not enough to pull forward the whole of the economy. We will be anticipating with interest the second quarter numbers to see if there is a rebound, albeit only technical, or a confirmation, in which case real worries could arise.

One has to see, also, the « screenplay » of this information : The very bad growth number for the first quarter is barely relayed and analysed in the media, as if it were an aberration that had to be forgotten quickly. But on the other hand, the next day, we’re told about an upward revision of the job creation numbers for April... Finally, is the recovery here?

Let’s dig a little, here. We know how the lowering of the official unemployment rate is obtained : By not taking into account the discouraged workers (who no longer look for work). The percentage of active workers to the total population went from 62% in 2007 to 59% today. Only 59% of Americans of working age do have a job. Another way of looking at it, 102 million Americans of working age do not have a job. Another significant statistic : 20% of American families do not comprise a single worker! And they would have us believe that unemployment is falling?

Meanwhile, Janet Yellen has confirmed the tapering of QE by $10 Billion. The spigot is being turned off little by little. For the month of May, the Fed will buy $25 B worth of Treasury bonds and $20 B of mortgage-backed securities. Since the tapering started, the Dow Jones is a little more hesitant and is not going up as much as before. Which makes sense, with less « fuel » coming in. It will be quite interesting to watch what happens next.

With a pseudo-recovery going nowhere, real unemployment persisting, a hesitant stock market and a slowing monetary press, the United States is entering a crucial period. Come September, the whole Quantitative Easing plan should be entirely extinguished. If, by then, there is still no real recovery, it will be a very risky period... 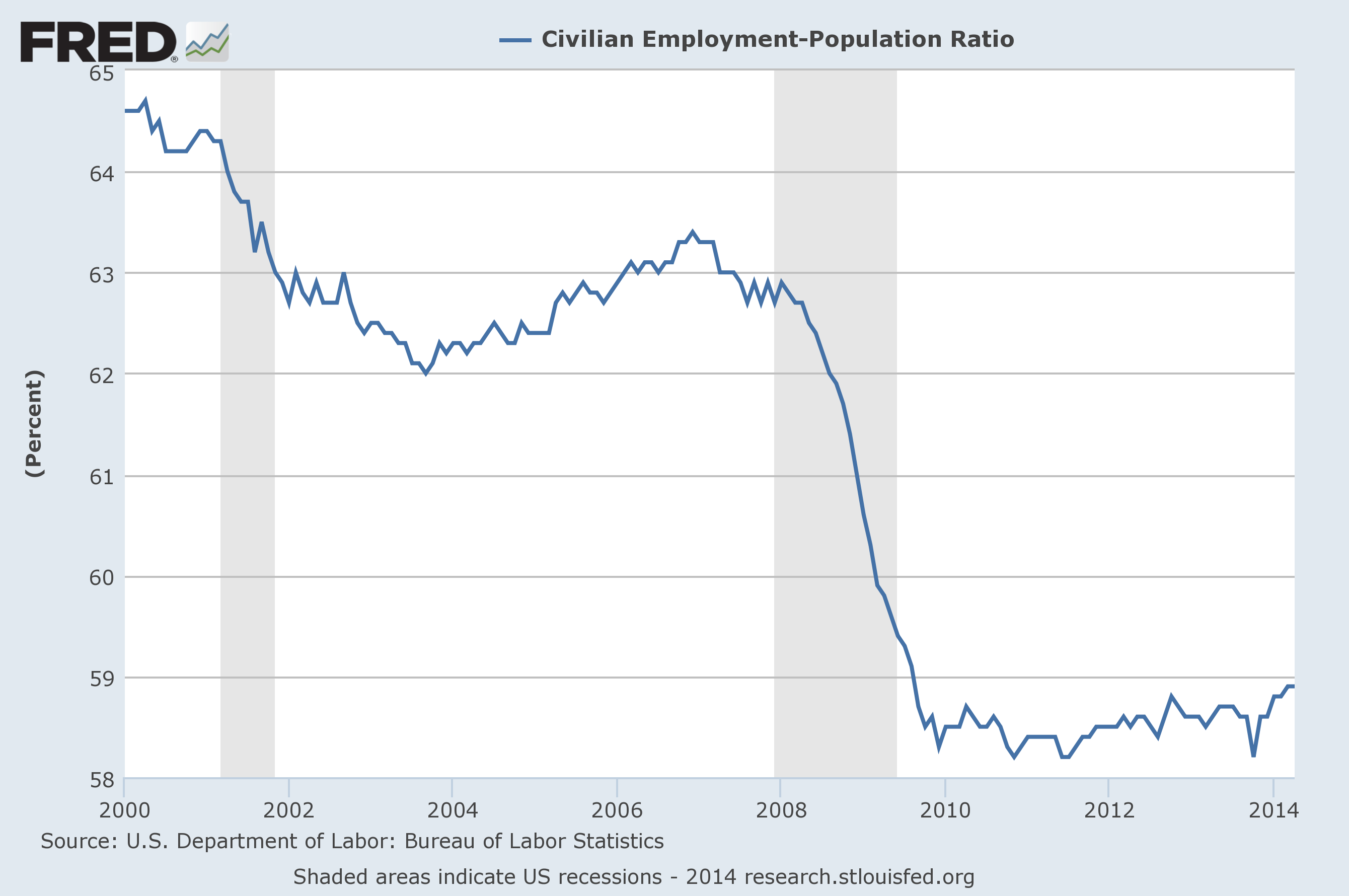