Over the past decade, these top five countries were the leading silver investors in the world. From 2010 to 2019, citizens in these countries invested over two billion ounces of silver bars and coins. Which country was the largest investor of silver?

Since 2010, investors from India, China, United States, Germany, and Canada purchased a tad bit more than two billion ounces of silver bar and coin. To be precise, it was 2,004 million oz. The world’s largest investor of physical silver bullion products turned out to be Americans. U.S. citizens invested in 929 million oz (Moz) of silver bars and coins over the past decade. 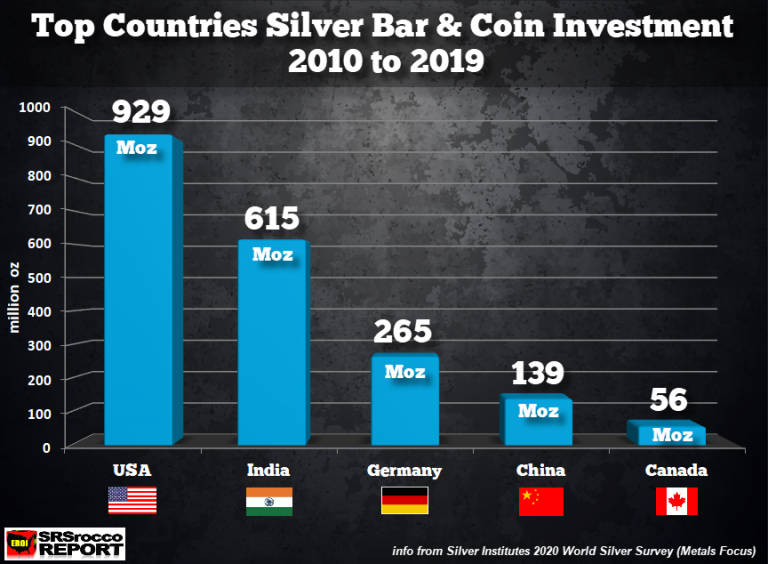 Indian investors came in second at 615 Moz, followed by Germany (265 Moz), China (139 Moz), and Canada (56 Moz). While I wasn’t shocked that Americans were the largest physical silver investors, I was quite surprised at the amount purchased by the Chinese and Canadians.

Furthermore, even though there are over 1.4 billion Chinese, it’s citizens only invested 139 Moz in silver bars and coins from 2010-2019. Chinese tend to favor investing mostly in physical gold bullion. In contrast, India, with a smaller population than China, invested more than four times in physical silver. Moreover, Indians prefer silver bars over coins. The overwhelming majority of the 615 Moz of physical silver purchased by Indians was in bar form… most likely 90+%.

According to the data from the Silver Institute’s 2020 World Silver Survey (by Metals Focus), while the Royal Canadian Mint produced nearly 26 Moz of Official Silver Coins in 2019, it’s citizens only purchased 5 Moz of silver bars and coins last year. Thus, most of the Silver Maple Leafs were bought by Americans or other foreigners.

Another surprise was the amount of silver bullion invested by Germans. Last year, Germans acquired 32 Moz of silver bars and coins, compared to 48.2 Moz for the USA, 56.5 Moz for India, 6.2 Moz for China, and as stated above, 5 Moz for Canada.

Global physical silver investment was 186 Moz in 2019, but I believe we are going to see a massive surge in 2020. Due to the worldwide contagion, investors purchased a record amount of silver bullion products in late March and April. This record-buying wiped out most of the precious metals dealers inventories.