As we continue to enjoy the "Yellen gold standard," now in its Powell phase -- who knows how long it will last -- let's look at why the gold standard system worked so well for so many centuries, including nearly two centuries of U.S. history before the rupture in 1971, during which time the United States became the wealthiest country in the history of world.

In 1971, the economist Arthur Laffer -- he was the chief economist of the Office of Management and Budget at the time -- was asked what he thought the consequences would be of Nixon's "closing of the gold window," which effectively ended the Bretton Woods period when the dollar's value was fixed at $35/ounce of gold.

"It won't be as much fun to be an American anymore," Laffer reportedly replied. And he was right.

But why? Why is it that the collective intelligence (let's be generous) of today's central bankers, and indeed all the central bankers since 1971, cannot outperform a yellow rock? This probably strikes some as bizarre, but it has always been thus. Way back in 1928, in a book called The Intelligent Woman's Guide to Socialism and Capitalism, George Bernard Shaw declared:

It's the same today. These things never change. Ninety years ago, intelligent women understood these things.

To understand why gold works, as a standard of monetary value, you have to understand what makes good money. Today's cryptocurrency enthusiasts are rediscovering what monetary thinkers have always known: that the best money is stable money, or, as I like to term it, Stable Money -- money that is stable in value. After learning that Bitcoin and its ilk make splendid devices for gambling (the continued popularity of places like Las Vegas and Macau show that there remains a large interest in such things), but a rather poor currency -- exactly as I said would happen some years ago -- the cryptocurrency engineers are now focusing their energies on developing "stablecoins."

Ideally, a currency would be perfectly stable in value. The market economy is organized via prices, profit margins, returns on capital and interest rates. Changes in the value of the currency derange this process, creating chaos and havoc. John Maynard Keynes described in 1923:

"[Markets] cannot work properly if the money, which they assume as a stable measuring-rod, is undependable. Unemployment, the precarious life of the worker, the disappointment of expectation, the sudden loss of savings, the excessive windfalls to individuals, the speculator, the profiteer--all proceed, in large measure, from the instability of the standard of value."

In The Scandal of Money (2016), George Gilder updated this insight, using the tools of modern information theory:

"Casting a shroud of uncertainty over all valuation, monetary manipulations shorten the time horizons of the economy. In information theory, the dominant science of our age, when a medium sends a message of its own--static on the line--it's called noise. Noise in the channel reduces the channel's capacity to transmit accurate information."

In practice, such idealized perfection is not quite possible, so we have to go with the next best thing. The next best thing is gold: the thing that most closely approximates this ideal of stability of value. President James Madison summed up succinctly:

"The only adequate guarantee for the uniform and stable value of a paper currency is its convertibility into specie [gold]--the least fluctuating and the only universal currency."

And the United States became one of the most successful countries in the history of the world because people like James Madison understood it, and adhered to this principle from 1789 to 1971.

In this single sentence, Madison touched on some important political truths. You might argue that, ideally, "smart people" could get together and create some better -- that is, more Stable -- foundation for money than gold. But, you might also notice that nobody actually does this. They don't even try, and never have, in the past five decades of floating fiat money. One reason for this is that they are human: consequently, they crumble to political pressures, while gold does not. Even if you could invent some statistical concoction that is a better measure of Stable Value than gold -- although no human ever has -- arguably, no human institution could ever implement it for any length of time. Just look at how statistical concoctions like the Consumer Price Index have been continually altered, each time in response to political pressures, and to serve political ends. This is one reason why, as Madison asserted, gold remains "the only adequate guarantee for the uniform and stable value of a paper currency."

Related to this is the fact that gold is the "only universal currency." It is the only thing (along with its adjunct silver) that all people have agreed to use as the basis of money, which then allows fixed exchange rates between countries, vastly simplifying trade and investment. In the pre-1914 era, most major governments participated in the world gold standard, which was simply the extension of many centuries of gold and silver coinage used throughout the world. This system was reassembled during the 1920s, and again in 1944, at Bretton Woods. We have had no difficulty establishing world monetary systems based on gold.

Contrary to popular belief, most countries today do not have freely-floating currencies. According to the International Monetary Fund, about half of all countries actively "anchor" their currencies to something else, usually a major international currency like the dollar or euro. In other words, they have fixed exchange rates. Another 25% of all currencies are "stabilized" against a major international currency, which remains the reference although exchange rates are allowed to drift somewhat. Either "anchored" or "stabilized," most currencies today are part of the dollar or euro currency blocs. The only significant difference between the euro currency bloc, and the prior world currency bloc based on gold, is the standard of value: gold, or the floating fiat euro.

Despite this enthusiasm for fixed exchange rates (a form of Stable Money), there is little interest today in establishing a unified world currency bloc. We could, for example, form a world currency bloc around the euro, and the IMF has long promoted such solutions. Then, the world would be free of the difficulties of floating currencies. The dollar/euro exchange rate would be fixed, along with the pound/euro, yen/euro and other exchange rates.

The simple reason is that nobody would trust the European Central Bank. I wouldn't -- because the ECB is subject to political pressures, or other agendas, to which gold is immune. The ECB can also serve as a means of imposing political pressures.

Actually, the world did have a system like this. It was called the Bretton Woods arrangement. The British pound, German mark, Japanese yen, French franc and all other world currencies were nominally linked to the U.S. dollar. The reason why they agreed to this is that the U.S. dollar was also linked to gold, at $35/oz. When the dollar left gold in 1971, nobody was interested in remaining linked to the dollar, and currencies floated. They still float today.

Gold's performance as a standard of Stable Value has been exemplary. It is, actually, a lot better than one might rationally expect. The things that the gold standard made possible -- such as the extraordinary stability of bond yields during the nineteenth century -- have never been replicated under fiat currencies. Just look at those results (achieved without market manipulation), and tell me which central bank wiseguy -- give me a name of a real person -- that you think could accomplish this; and then explain, if that is true, why they haven't done so already. 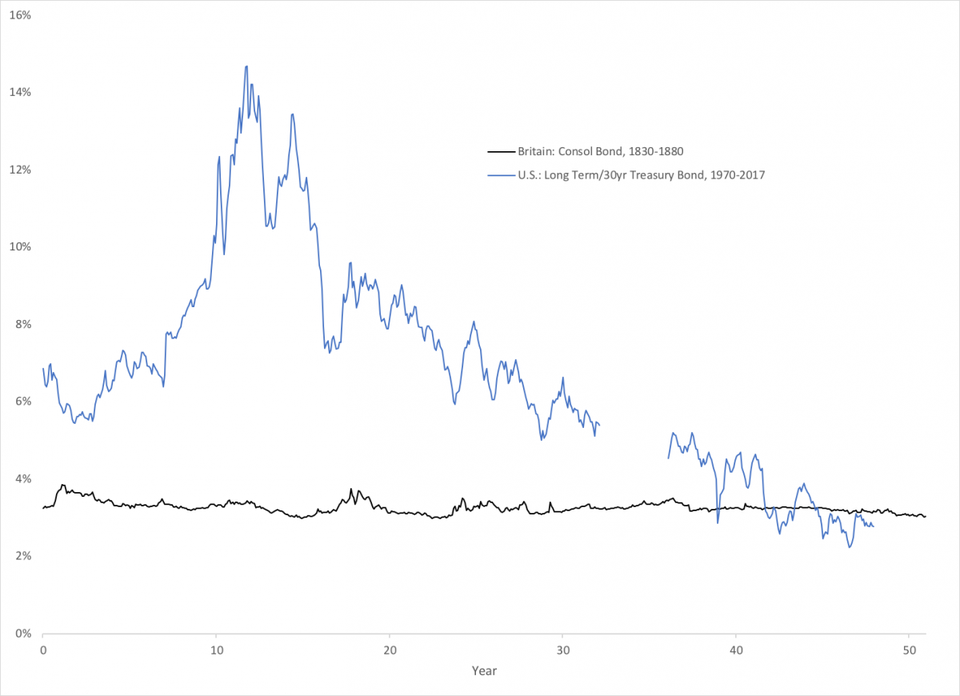 Economies work best when currencies are stable in value. Once we know what the goal is, we then look for a way to achieve it; and the best way has always been to base a currency on gold. Nobody has found a better way, even in the form of a proposal; and nobody has ever needed to find a better way, because gold has always worked very well.