The Fed left its monetary policy unchanged. However, the lack of any action amid economic recovery is dovish – good news for gold.

On Wednesday (Apr. 28), the FOMC has published its newest statement on monetary policy . The statement wasn’t significantly altered. The main change is that the Fed has noticed the progress on vaccinations and strong policy support, and that, in consequence, the economic outlook has improved.

Similarly, the US central bank is no longer considering the epidemic as posing “considerable” risks to the economic outlook. Instead, the pandemic “continues to weigh on the economy, and risks to the economic outlook remain”. It means that the Fed has become more optimistic and does not see risks as considerable any longer. This is bad for the price of gold although it’s not a very surprising modification, given the progress in vaccinations. However, no hawkish actions will follow, so any bearish impact for gold should be limited.

Another important alteration is that inflation no longer “continues to run below 2 percent”, but it “has risen, largely reflecting transitory factors”. This would be normally a hawkish change with bearish implications for gold. But the Fed doesn’t worry about inflation and is not going to hike the federal funds rate anytime soon, even when inflation remains above the target for some time. As Powell pointed out, “the economy is a long way from our goals, and it is likely to take some time for substantial further progress to be achieved.” Thus, gold bulls may sleep peacefully .

Indeed, they can relax with Mr. Powell on guard. The Fed Chair has reiterated during his press conference that the US central bank is not going to tighten its dovish stance and reduce the quantitative easing:

Uncle Jay and his bedtime stories… about inflation that is only “transitory”. Once upon a time,

the PCE inflation [is] expected to move above 2% in the near term. But these one-time increases in prices are likely to have only transitory effects on inflation.

Well, sure. Nonetheless, this is the favorite story of central bankers all over the world told to naive citizens. Just wait for the April inflation readings – they will be something! Of course, it is going to be too early to declare persistently higher inflation, but I’m afraid that the Fed may be too carefree about such a possibility.

So, in the aftermath of the generally dovish FOMC meeting, the dollar slid yesterday, while the price of gold went up . Gold continued its recovery from the March bottom, as depicted in the chart below. This makes sense: after all, the Fed reiterated that it would maintain its current ultra easy stance for the foreseeable future, despite the fact of acknowledged improved economic outlook. 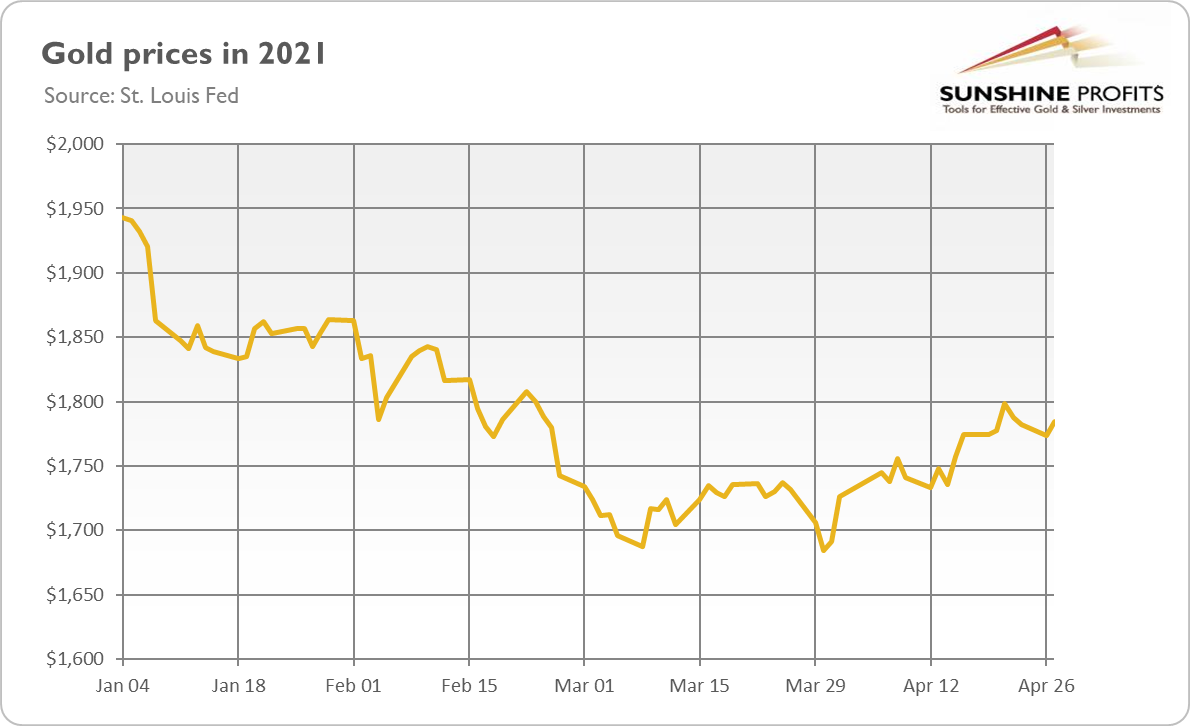 In other words, the Fed’s inaction made the US central bank more dovish given the better economic outlook and higher inflation. The statement’s language about the coronavirus and the economy was more optimistic, but inflation was considered to be transitory and no hawkish actions were signaled. So, the recent FOMC meeting should be positive for the gold prices from the fundamental point of view, although gold may continue its recent, generally lackluster performance for a while. Of course, the expansion of Fed’s accommodative monetary policy would be much better for the yellow metal, but the lack of any hawkish signals could still clean the room for gold for further upward moves.