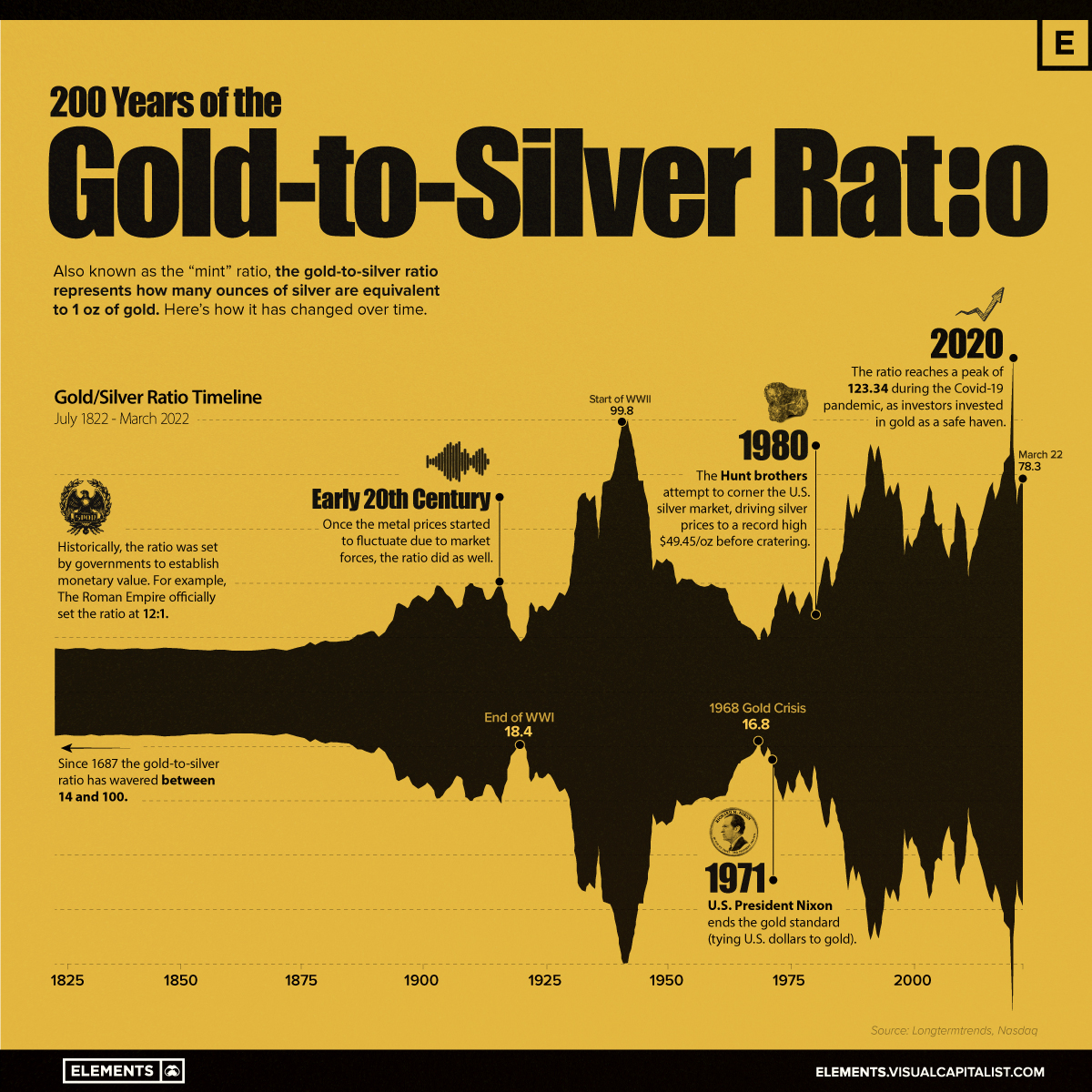 Charting 200 Years of the Gold-to-Silver Ratio

Gold and silver have been precious and monetary metals for millennia, with the gold-to-silver ratio having been measured since the days of Ancient Rome.

Historically, the ratio between gold and silver played an important role in ensuring coins had their appropriate value, and it remains an important technical metric for metals investors today.

This graphic charts 200 years of the gold-to-silver ratio, plotting the pivotal historical events that have shaped its peaks and valleys.

What is the Gold-to-Silver Ratio?

The gold-to-silver ratio represents the amount of silver ounces equivalent to a single ounce of gold, enabling us to see if one of the two precious metals is particularly under or overvalued.

Currently, the ratio sits at about 80 ounces of silver equivalent to one ounce of gold. This is after the ratio spiked to new highs of 123.3 during the COVID-19 pandemic.

While gold is primarily viewed as an inflation and recession hedge, silver is also an industrial metal and asset. The ratio between the two can reveal whether industrial metals demand is on the rise or if an economic slowdown or recession may be looming.

The History of the Gold-to-Silver Ratio

Long before the gold-to-silver ratio was allowed to float freely, the ratio between these two metals was fixed by empires and governments to control the value of their currency and coinage.

The earliest recorded instance of the gold-to-silver ratio dates back to 3200 BCE, when Menes, the first king of Ancient Egypt set a ratio of 2.5:1. Since then, the ratio has only seen gold’s value rise as empires and governments became more familiar with the scarcity and difficulty of production for the two metals.

Ancient Rome was one of the earliest ancient civilizations to set a gold-to-silver ratio, starting as low as 8:1 in 210 BCE. Over the decades, varying gold and silver inflows from Rome’s conquests caused the ratio to fluctuate between 8-12 ounces of silver for every ounce of gold.

By 46 BCE, Julius Caesar had established a standard gold-to-silver ratio of 11.5:1, shortly before it was bumped to 11.75:1 under emperor Augustus.

As centuries progressed, ratios around the world fluctuated between 6-12 ounces of silver for every ounce of gold, with many Middle Eastern and Asian empires and nations often valuing silver more highly than Western counterparts, thus having a lower ratio.

The Rise of the Fixed Ratio

By the 18th century, the gold-to-silver ratio was being redefined by the U.S. government’s Coinage Act of 1792 which set the ratio at 15:1. This act was the basis for U.S. coinage, defining coins’ values by their metallic compositions and weights.

Around the same time period, France had enacted a ratio of 15.5:1, however, neither of these fixed ratios lasted long. The growth of the industrial revolution and the volatility of two world wars resulted in massive fluctuations in currencies, gold, and silver. By the 20th century, the ratio had already reached highs of around 40:1, with the start of World War II further pushing the ratio to a high of nearly 100:1.

Recently in 2020, the ratio set new highs of more than 123:1, as pandemic fears saw investors pile into gold as a safe-haven asset. While the gold-to-silver ratio has since fallen to roughly 80:1, runaway inflation and a potential recession has put gold in the spotlight again, likely bringing further volatility to this historic ratio.