Central banks continued their gold-buying spree in February, although the pace of gold purchases has slowed compared to last year’s near-record purchases.

On net, central banks globally added another 36 tons of gold to their reserves in February, according to the latest data released by the World Gold Council. That was about 33% higher than January’s total.

On the year, central banks have bought 64.5 tons of gold. That compares to 116 tons through the first two months of 2019.

The World Gold Council bases its data on information submitted to the International Monetary Fund.

Turkey continued to be the biggest gold-buyer. The Turks added another 24.8 tons to their reserves in February.

Russia further increased its stockpile of yellow metal, adding another 10.9 tons to their hoard.

Russia’s quest for gold has paid off in a big way. The Russian Central Bank’s gold reserves topped $100 billion in September 2019 thanks to continued buying and surging prices. 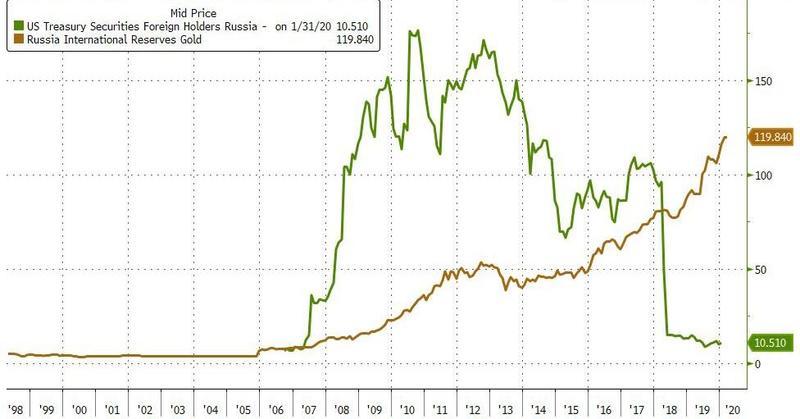 The Russians have been buying gold for the last several years in an effort to diversify away from the US dollar. Russian gold reserves increased 274.3 tons in 2018, marking the fourth consecutive year of plus-200 ton growth. Meanwhile, the Russians sold off nearly all of its US Treasury holdings. According to Bank of America analysts, the amount of US dollars in Russian reserves fell from 46% to 22% in 2018.

Last month, the Central Bank of Russia announced it planned to suspend gold-purchases for the time being, effective April 1. But in the first week of April, Russian banks were already asking the central bank to restart gold purchases. They expressed concern over gold exports amid disruptions in the transportation industry due to the coronavirus pandemic. National Finance Association head Vasily Zablotsky told Reuters that banks are “facing problems” exporting gold as there are also fewer cargo flights and transportation costs have doubled. 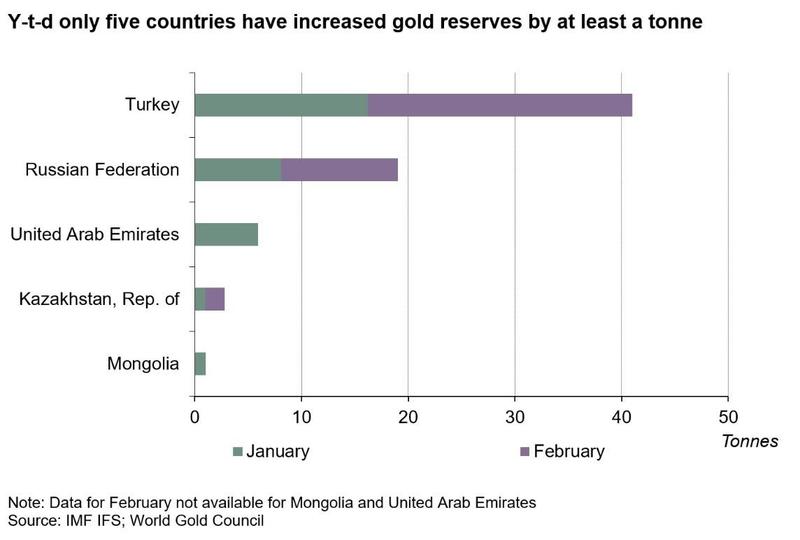 Other buyers of gold in February included:

The only major seller was Uzbekistan at 3.1 tons.

The People’s Bank of China did not report any gold purchases for the fifth straight month. It’s not uncommon for China to go silent and then suddenly announce a large increase in reserves.

Many analysts believe China holds far more gold than it officially reveals. As Jim Rickards pointed out on Mises Daily back in 2015, many people speculate that China keeps several thousand tons of gold “off the books” in a separate entity called the State Administration for Foreign Exchange (SAFE). Given the political dynamics and the ongoing trade war, it seems unlikely the Chinese suddenly stopped increasing their gold reserves in 2016. 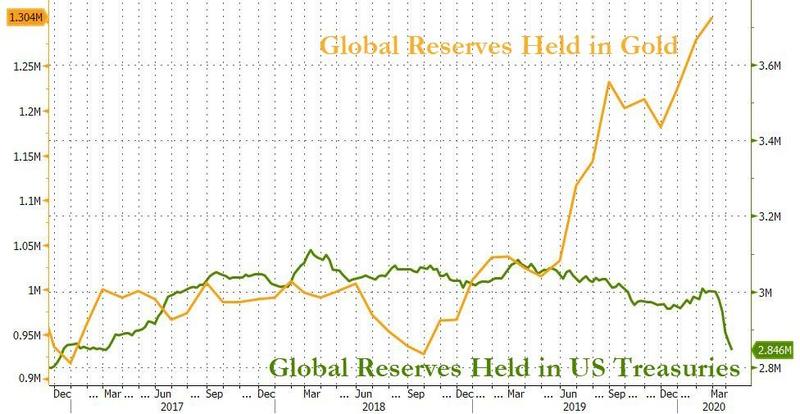 The WGC said it expects central banks to remain net-buyers of gold in 2020, but likely at a slower pace than the record levels we’ve seen over the past two years.

“We often get asked if central bank demand will be sustained. The past two months clearly suggest gold continues to be an important component of foreign reserves despite heightened levels of demand in recent years. But like everyone else, the recent market instability and uncertainty will be at the forefront of central bankers’ mind.”

Of course, it is difficult to tell how the economic impacts of the coronavirus pandemic will impact things down the road. It is possible that a rapid devaluation of the dollar due to Federal Reserve quantitative easing could drive central banks to dump dollars in exchange for gold.

"Central banks are looking toward gold to balance some of that risk. We’ve also got negative rates and yields for a large number of sovereign bonds.”

Central bank policy has become significantly looser since Hewitt made that observation.

Peter Schiff has talked about central bank gold-buying. He has noted that the US went off the gold standard in 1971, but he thinks the world is going to go back on it.

"The days where the dollar is the reserve currency are numbered and we’re going back to basics. You know, everything old is new again. Gold was money in the past and it will be money again in the future, and central banks that are smart enough to read that writing on the wall are increasing their gold reserves now.”

Ron Paul made a similar point in an episode of the Liberty report. He said foreign central banks are increasingly gravitating to sound money like gold and ripping themselves away from the Fed’s dollar.

"The central banks of the world are looking at gold again.”