The buoyancy of markets in recent years has lulled central bank heads into a false conviction that they had saved the world after the 2006-9 Great Financial Crisis.

But central bankers continue to navigate like drunken sailors between the evil forces of Scylla and Charybdis as in Homer’s Odyssey.

Few of the bankers have understood that printing unlimited and worthless paper money will not allow them a pass the strait of Messina without major, or more likely catastrophic, damage to the world economy.

As exuberance continues to dominate intoxicated stock market investors, they haven’t yet noticed that all is not well on the perilous seas.

Still, most markets continue to respond positively to the printing press rather than to the underlying fundamentals.

Printing presses don’t create real value, instead they create bubbles full of worthless air. But sadly intoxicated investors confuse air, which is free and has no value, with real, intrinsic values.

To take an example, what is the intrinsic value of Bitcoin or BTC? How should BTC be valued?

Are we today seeing Bitcoinomania similar to Tulipomania in the 1630s?

If not, can someone tell me at what price Bitcoin is fully and properly valued?

The Bitcoin aficionados will tell us that BTC is modern money and superior to any other currency. Well maybe they are right, but history must prove that. The 11 year history of Bitcoin is hardly sufficient to prove that it will fare better than any other money. We must remember that so far in history no currency has ever survived in its original form except for gold.

And the 5,000 year history of gold as money certainly makes it superior to all fiat currencies as well as cryptocurrencies.

During 5 millennia gold has represented constant purchasing power in grammes or ounces. That can hardly be said about Bitcoin which is up over 650,000 times in the last 10 years with a volatility which is totally unsuitable to call it money or use as money.

Having said all the above, BTC has been and might continue to be a superb speculative investment which is totally unsuitable as money. History will tell if I am right.

Central banks are obviously seeing that this currency is destruction coming since they have caused it. This is why they are desperate to introduce CBDCs in order to yet another time fool the people. They will just tell us that the old debt in old dollars has remarkably  disappeared and now we have new miraculous monetary system.

So the more it changes, the more it stays the same. Another currency system dies and a new digital one will achieve miracles.

What we must understand is of course that making the old debt disappear has consequences. You can’t just let one side of the balance sheet disappear without affecting the other side.

So if debt is written down to zero, so will all the assets that were financed by this debt. And this is why we will see a collapse of all bubble asset markets of up to 90% in real terms. That will include stock, bond and property markets.

CBDCs are of course a wonderful way to control the spending of the people. Governments and central banks can in an instant flood the market with money by issuing their digital currency directly to everyone or also turn off access to your own money.

So CBDCs not only gives the government total control of your money. It also means you could be fined arbitrarily for anything you are alleged to have done and obviously be taxed at will.

This would be as horrible as it sounds and means the ultimate totalitarian state.

But we must remember that if CBDCs were introduced, it would just be another form of fiat money that would not survive. In my view it would fail quickly due to the fact that the old debt and $1.5-2 quadrillion of derivatives cannot magically disappear without massive consequences.

So whether it will be the old currency system which will collapse or the new one, it is still likely to happen in the next 5-7 years and maybe a lot faster.

GOLD ON ITS WAY TO NEW HIGHS AND BEYOND

Since the time we made substantial investments in the physical gold market in 2002 at $300, I have never worried one day about the value of gold. History told us that gold, with normal fluctuations, would always reflect constant purchasing power.

And since I back then predicted that risk in the financial system would increase dramatically, physical gold was, and still is, the obvious wealth preservation investment.

The best time to buy an asset is when it is unloved and undervalued which was the case in early 2002.

One of my favourite charts is the annual gold chart below which shows that gold closed up 12 years in a row between 2001 and 2012. Thereafter gold corrected for until 2015 and since 2016 it is up every year except a sideways move in 2018. 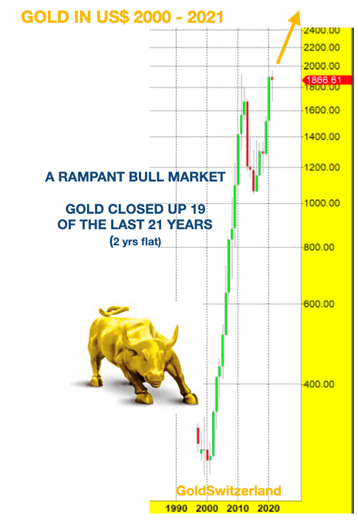 It is hard to find a clearer or stronger bull market of such an important asset class.

But we know of course that it isn’t gold going up but the value of paper money going down since all currencies have lost 97-99% of their value in relation to real money or gold since 1971. This we must of course thank Nixon for who closed the gold window in 1971. 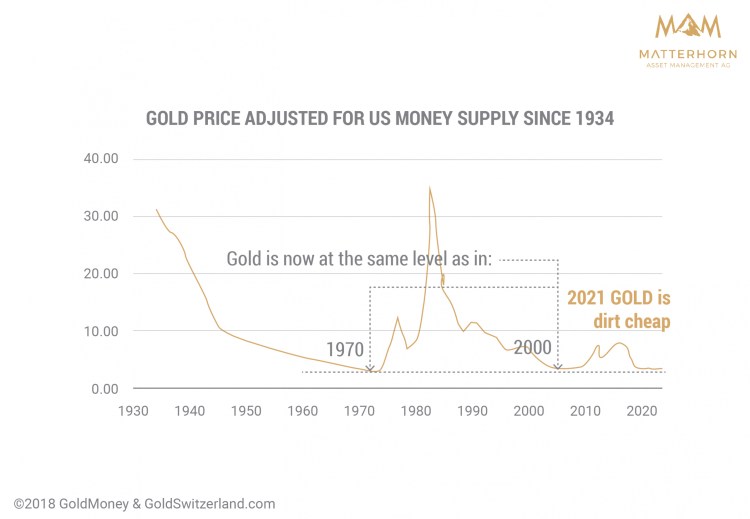 So gold has not yet reflected the massive growth in fiat money that the world has experienced in this century.

Gold in US dollars at currently $1,865 is slightly below the 2011 $1,920 peak. That is primarily due to a temporary and artificially high dollar. But in most currencies gold is substantially higher. See chart below. 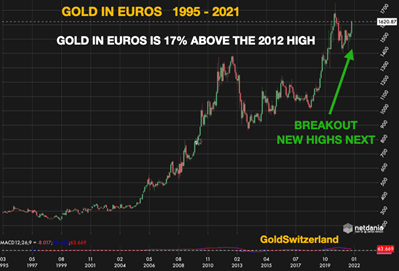 More importantly, gold has now started the latest phase of the bull market which began in 1971 and resumed in 2000.

Or more correctly the currencies have now started their final journey to their intrinsic value of zero. With a 97-99% fall in the last 50 years, the final 1-4% is only a matter of time. But as I often point out we must remember that the next move down is 100% from today which means a total annihilation of paper money.

So will we have Goldomania next?

Yes, very likely in my view.

The central bankers are trying to convince the world and themselves that current inflation is transitory as I outlined in my recent article which instead predicts hyperinflation.

Well, in the US consumer price inflation just surged to 6.2%, the highest since 1982!

The Fed must be over the moon! They have for years struggled to get the rate to 2% and they have now achieved over 6%. Isn’t it fantastic what you can achieve with unlimited money printing and zero interest rates! At the rate of 6.2% prices will double every 11 years which must really please the Fed.

So they have done everything they can to destroy the economy and the value of money. I don’t know what gives them the right to call it transitory.

Since the FED has never forecast anything before accurately, what tools do they now use to say it is transitory?

Anyone who understands the effect of unlimited credit expansion will know that this is extremely inflationary. So not only is the inflation not transitory but it will run out of control.

Most investors still don’t understand gold. This is why only 0.5% of world financial assets are invested in gold.

The current generation of institutional and private investors has not experienced inflation since the US last saw it over 40 years ago. They all thought that inflation was dead and buried when in fact all the actions of governments and central banks have created the most wonderful climate for inflation not just going up but surging to hyperinflationary levels.

As gold is now breaking out in all currencies, a very strong and sustained move to new highs and beyond will follow.

Also, over the next couple of years we are likely to see a stampede into gold by institutional investors which need to have some inflation protection in their portfolios. But even if they increased their assets in gold from 0.5% to 1.5%, there will not be enough gold in the world to satisfy the extra demand. This type of increase in gold demand can only be satisfied by much higher prices, creating a gold mania.

Today 10 tonnes of gold at $1900 per oz would cost $610 million.  An institution will still spend the same dollar amount when price goes up to say $10,000  But instead of getting 10 tonnes, the institution will get just under 2 tonnes.

What price will gold reach in fiat money. Impossible to say of course. It all depends on how much money will be printed and what the real value of the dollar or euro will be at the time. If the dollar goes to zero as all other currencies have in history, gold will of course go to infinity, measured in useless fiat money. See my article “Will Gold Reach Unthinkable Heights”.

GOLD IS FOR WEALTH PRESERVATION

Gold must not be held for speculation or instant gratification. Instead, hold physical gold and some silver for wealth preservation purposes.

Physical gold and silver will not just preserve your wealth but substantially enhance it as the world economy enters a very troubled time.

So will we have Goldomania?

This means that gold (and silver) could become overvalued and overloved at some point in the next 5-10 years like in all manias. That might be the time to swap some gold and silver to undervalued and unloved assets which could be stocks, or land or solid businesses. Such situations can create fantastic opportunities but first we must go though some cleansing and difficult times.