1. The traditional post jobs report rally for gold is in full swing. Gold arrived at a key Fibonacci line at about $1268 as the US jobs report was released. 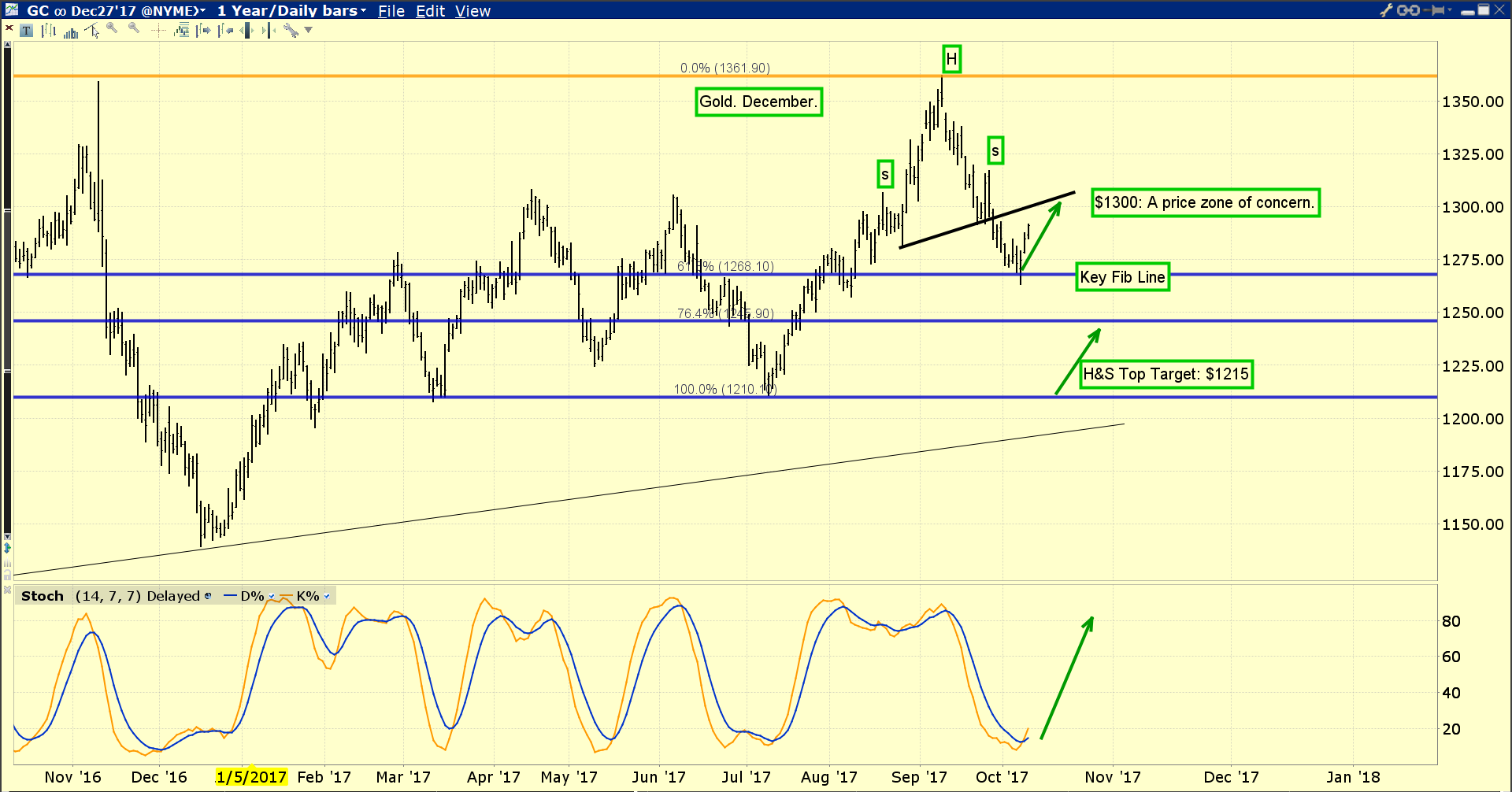 2. The dollar has stalled against the yen, and that’s also good news for gold. 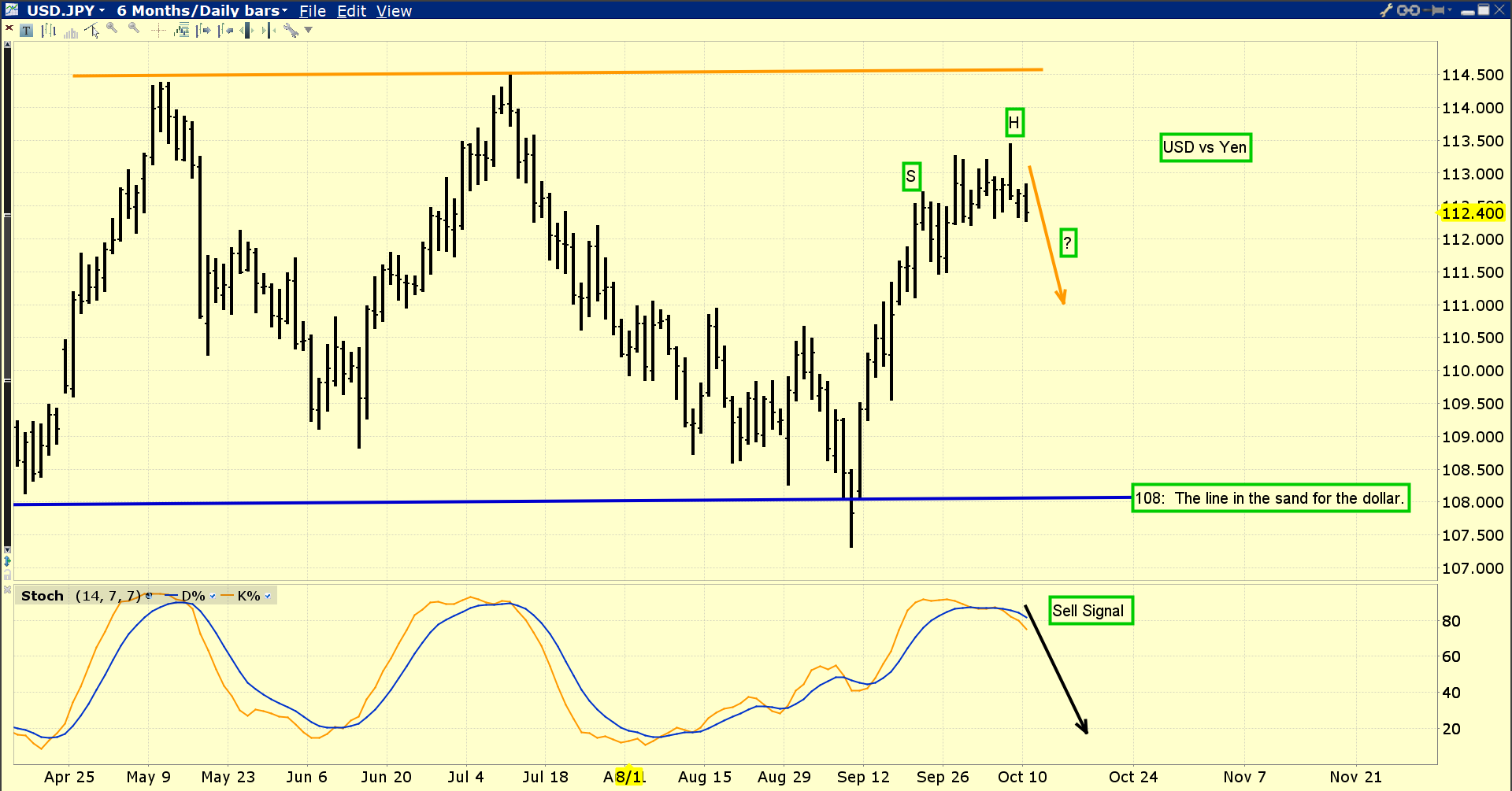 3. Gold tends to stage great rallies in the days following the jobs report, and this rally is a particularly interesting one. Here’s why:

4. First, Trump has ratcheted up his “hawk talk” in regards to North Korea and Iran. He’s scheduled to make a key speech on Thursday about Iran, a country which is now exporting two million barrels of oil a day.

5. Second, the Chinese government recently chopped commercial bank reserve requirements. That triggered a massive rally in bank stocks around the world, and in most stock market indexes.

8. Perhaps most importantly of all, on Friday the Indian government cancelled the “Know Your Client” rule for gold jewellery buyers and that happens just in time for the launch of Diwali.

9. This is pretty big news for gold price enthusiasts around the world. 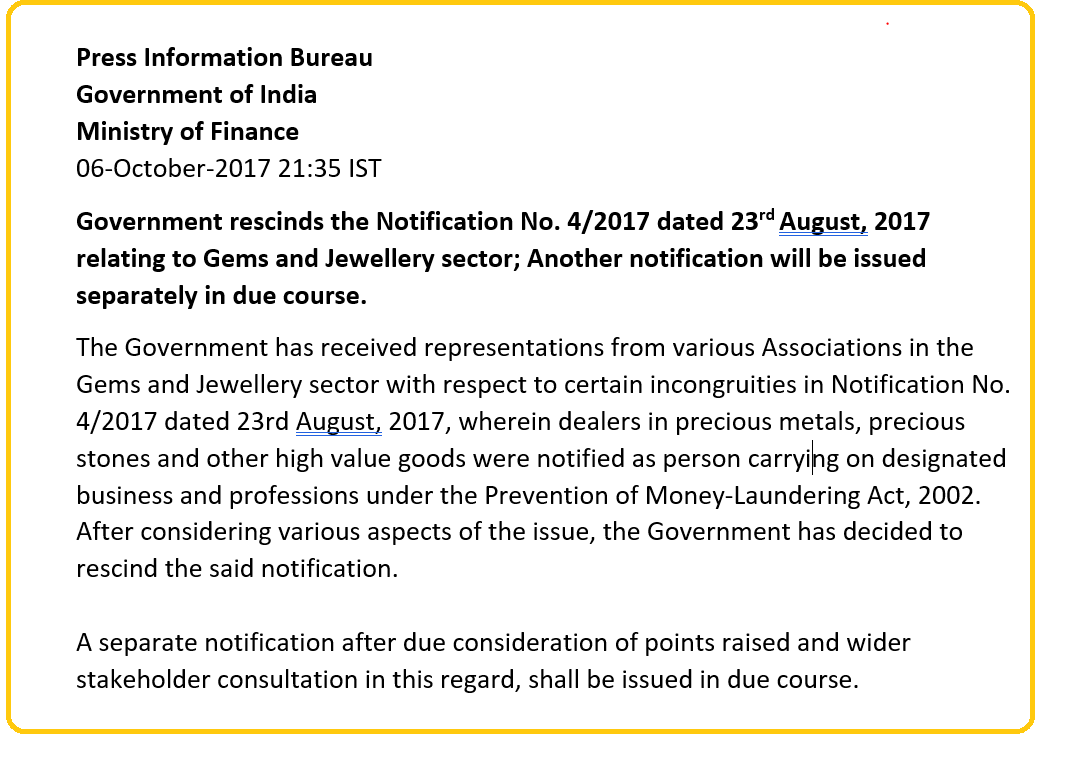 10. Given all of this gold-positive news, it’s pretty easy to understand why gold has bounced so firmly from the $1268 area Fibonacci line.

11. Fundamentally, there is nothing negative for gold right now. Gold has rallied after every rate hike. It did that in the 1970’s as the Fed Funds rate soared to 20%. The precious metals and the mining stocks soared like a flock of golden eagles as that happened, and 2018 could see that repeated, albeit on a smaller scale.

12. The Fed has three rate hikes scheduled for 2018, and aggressive quantitative tightening (QT). By December of 2018, money velocity should reverse and begin a long term bull cycle.

13. The QE money ball is essentially “toast”. Bond prices will get a haircut as rates rise and QT accelerates. Money will pour out of government bonds and central banks and into the fractional reserve banking system, and… into gold.

14. Central banks and governments have not propped up their economies since the 2008 financial crisis occurred. 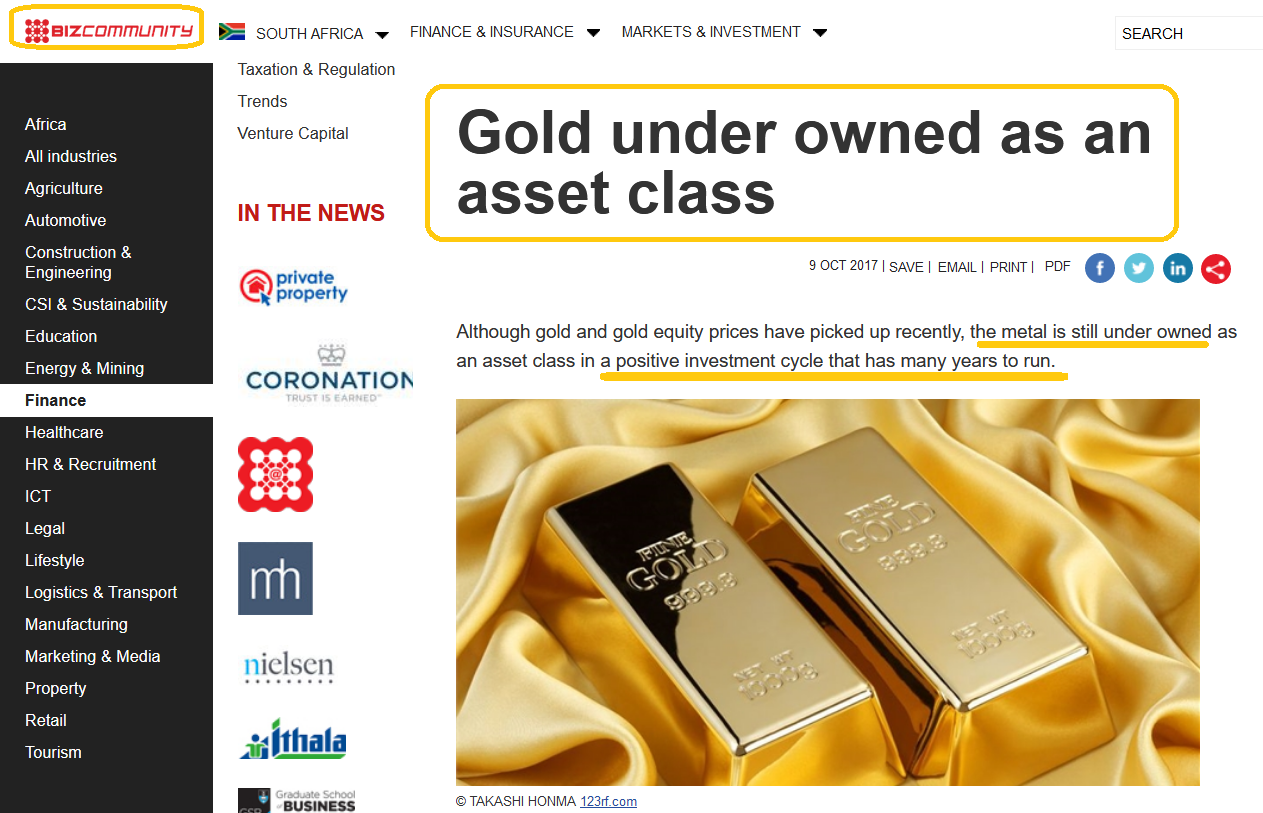 15. What they have done is prop up financial markets while insidious inflation and no wage gains on Main Street have seen the plight of the average citizen get worse.

16. That can change. Donald Trump’s three main campaign promises were to cut taxes, chop the price of the US dollar against other fiat currencies, and to give government bond market creditors a haircut. 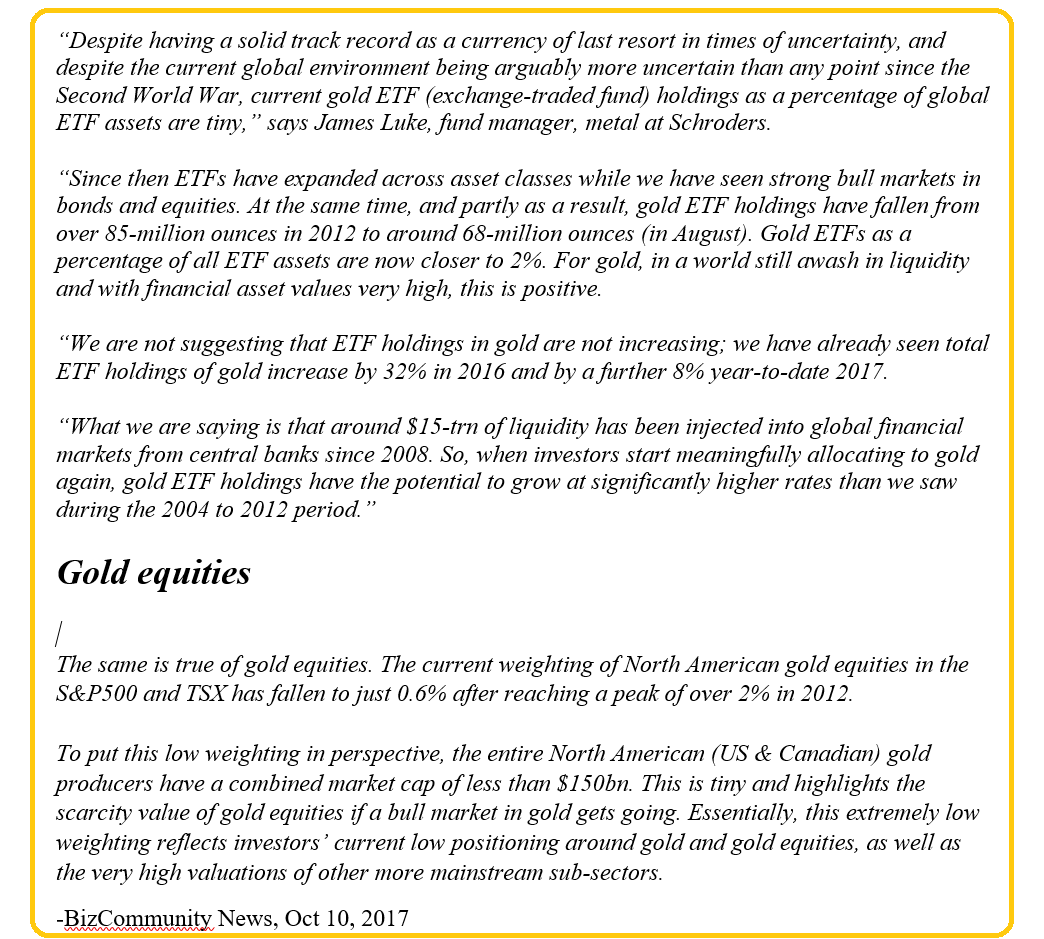 17. His promises are essentially a mechanism to move a portion of the fifteen trillion dollars in financial markets liquidity towards Main Street. He has yet to do that, but I think 2018 will probably be recorded in history books as “The Golden Year”.

18. I’m predicting that 2018 will be the year that Trump begins talking more openly about the bond market and the need for creditors to be realistic about what they can expect to get paid.

19. Along with the “motherlode” of positive demand coming out of China and India, Trump’s actions and words should help make 2018 the year that gold ends its sideways trading pattern of the past three years, and starts a significant trending move higher.

20. Double-click to enlarge this fabulous silver chart. There’s a beautiful inverse head and shoulders bottom formation in play, with an ultimate target in the $22 area. 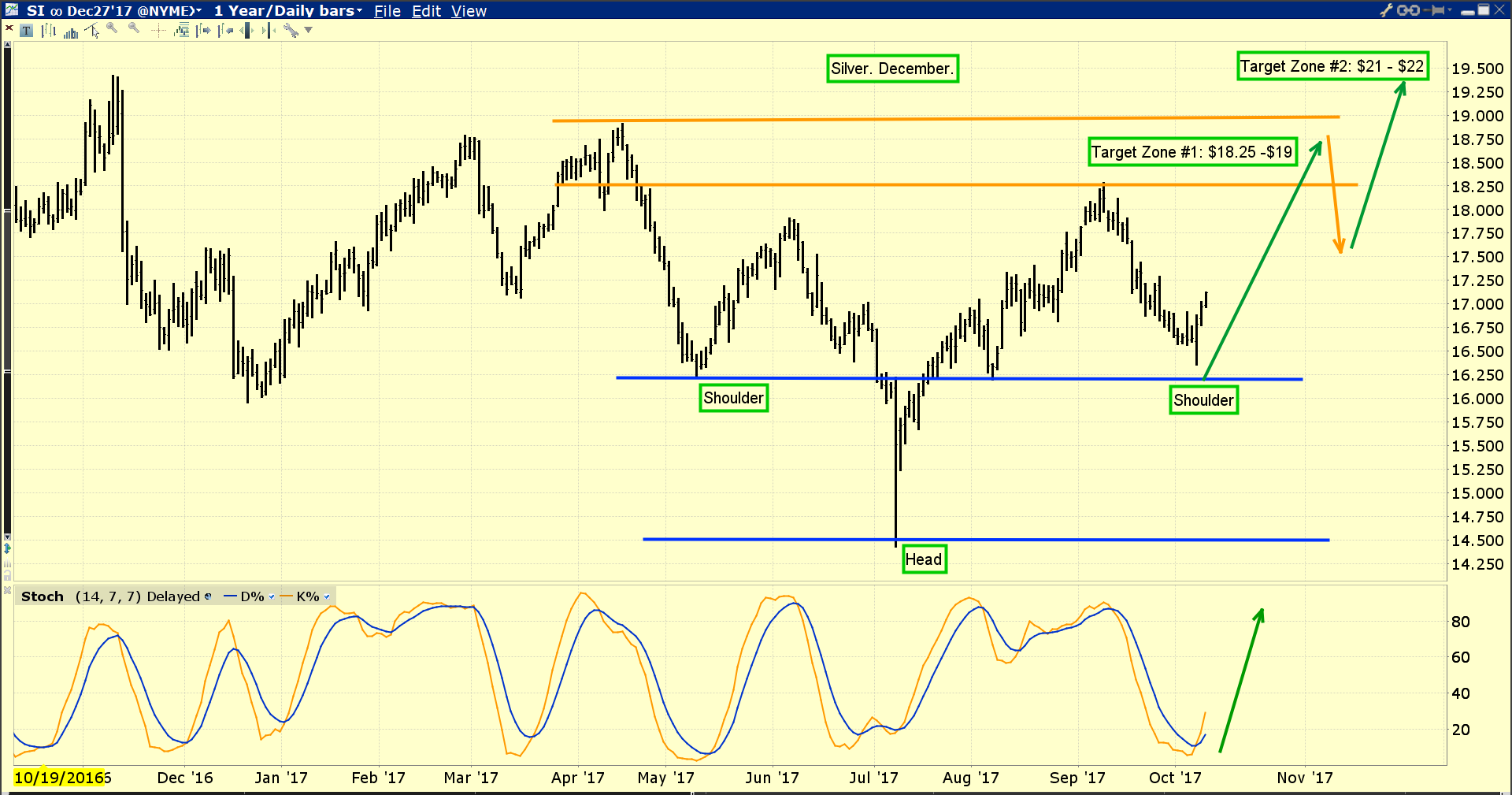 21. Double-click to enlarge this key GDX chart. GDX has started a strong rally. All fundamental lights are green for the entire precious metals asset class. 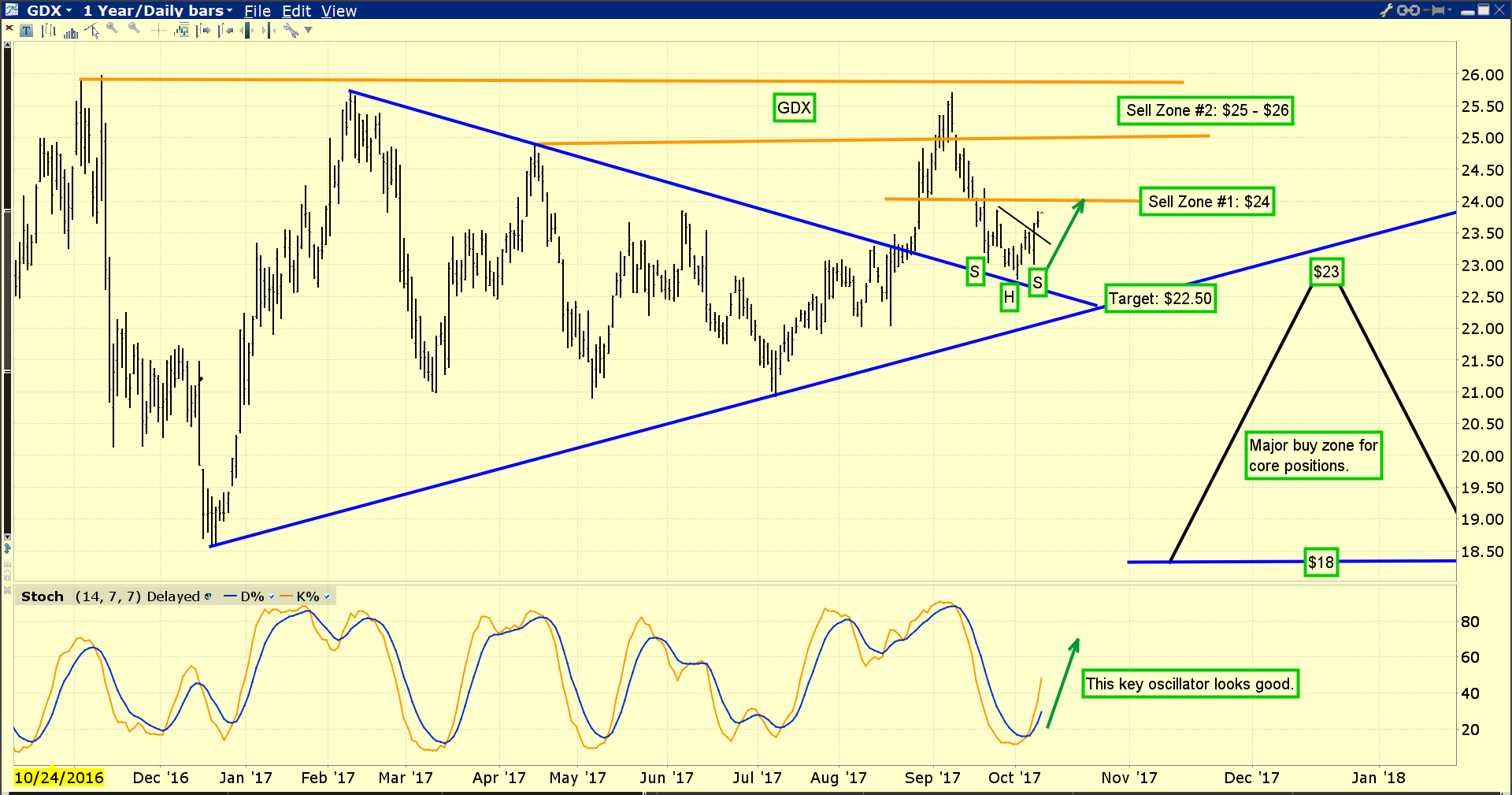 22. Most technical lights are green, except for one. My “line of concern” at $1300 relates to the head and shoulders top neckline that gold is rallying towards now. 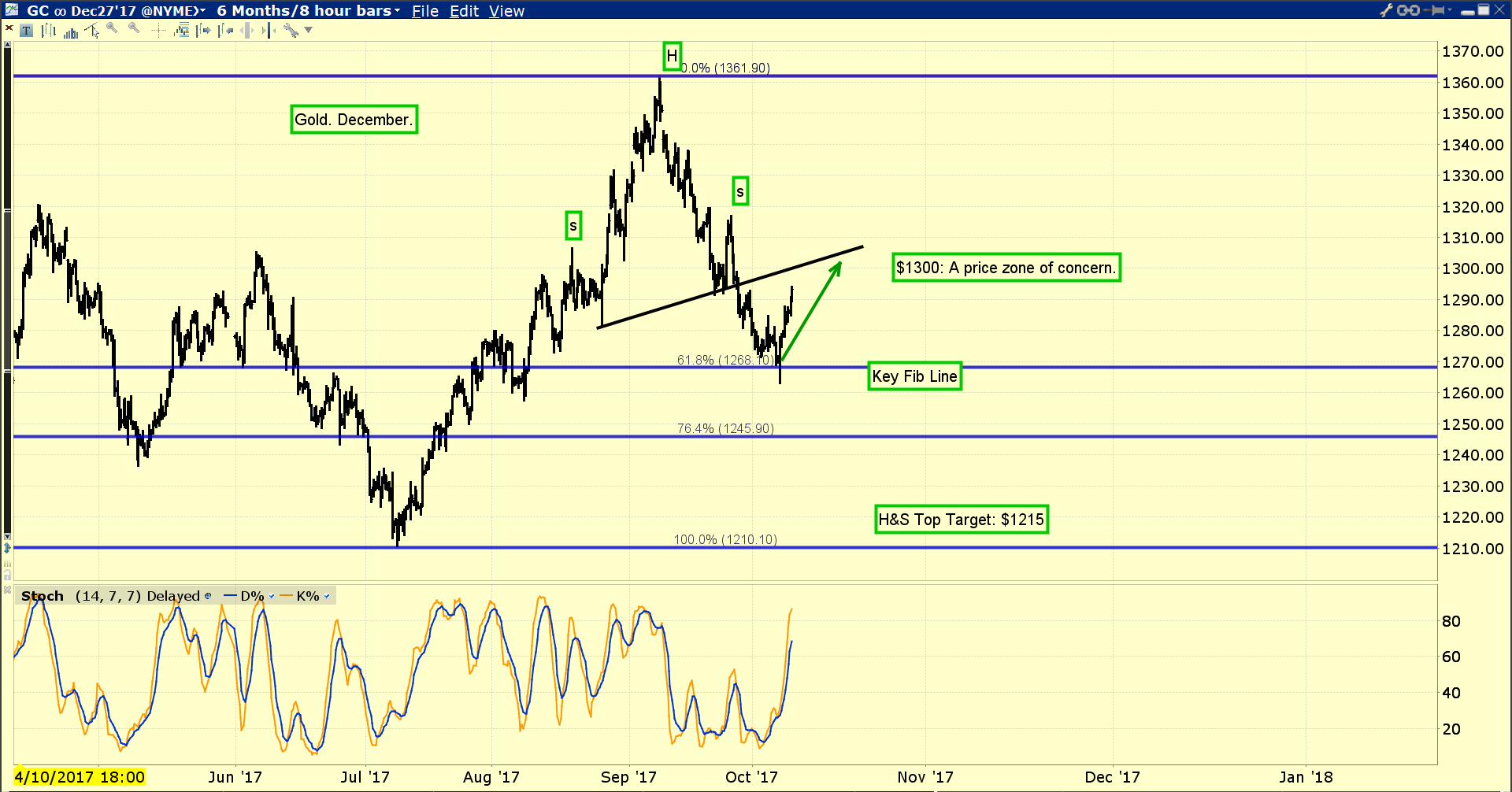 23. The technical target of that pattern is about $1215. Whether the “Queen of Assets” can successfully surge through that neckline area is likely to be determined in the short term by Trump’s speech on Thursday about Iran. In the medium term, it will be determined by the amount Diwali gold demand that appears (or doesn’t) over the next two weeks.

24. Tactics? Nervous investors should buy put options and buy them today! On the buy-side, the key for gold bugs is to be light buyers of all their favourite precious metals investments if gold trades at $1270 and to be substantially bigger buyers at $1215 or lower. Do that, while cheering that the price only goes higher!