It seems the market has been doing all it could to scare away as many participants as possible out of their positions on gold, silver and the miners! Even the most ardent gold bugs are throwing in the towel.

The enormous volumes on the GDXJ since the beginning of the year are a sign that deep pockets are accumulating the miners. And these people do not usually comment, either for free or for money, in financial newsletters or on websites. The only observable trace they leave can be seen in the volumes, just like one can see a buffalo herd just went through by looking at the footsteps on the soil : 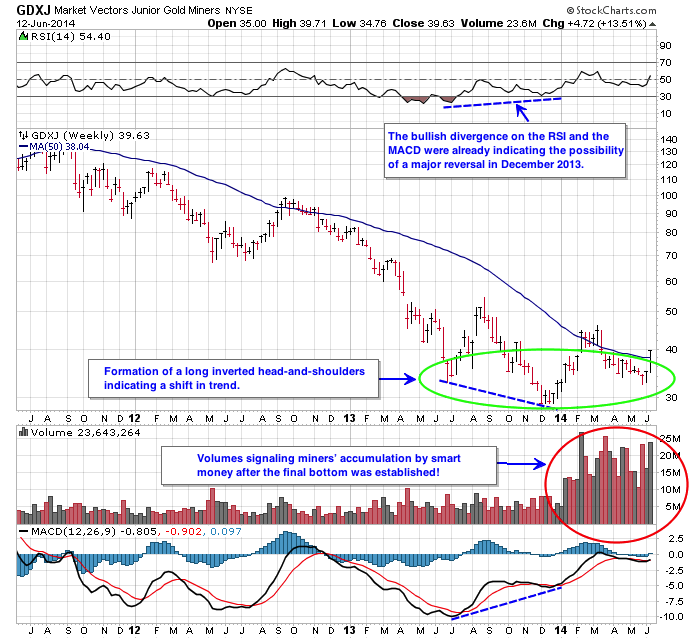 Yesterday, the daily volume on the GDXJ Junior Miners Index beat all records, exceeding by 33% its highest historic value, and producing a 5.78% hike, five times the performance of gold! The bears had tried to gain back control of the market, but they remained all by themselves after having provoked the capitulation of the last weak hands holding gold miners, on May 27 and 28. The result was a grand defeat for the bears. The same explosive situation might now happen in the gold and silver markets.

The stock market has been delirious for over a year now and, for even more than a year, the gold market analysts have been laughed at, with the result that fear has totally disappeared from the stock market, and those who have stood up and predicted the irresistible rise in the price of gold in the coming years have lost all credibility. The wall of doubt surrounding the gold market is high enough that gold could go up by several thousands of dollars, amidst general disbelief.

Here is again the first page of the Financial Times : 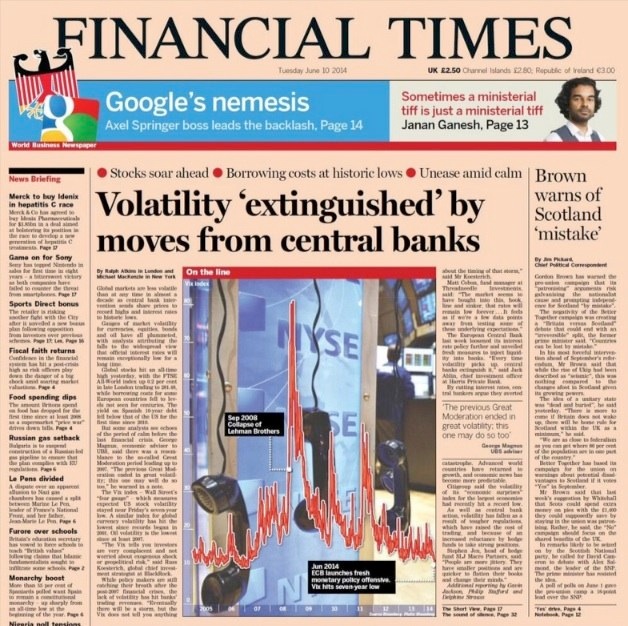 Seen on King World News : The death of volatility, or of fear on the stock markets. They’re right. After a year of total euphoria, the markets have crucified all the bears and everyone only sees the market going up, up, and up. This is the ideal prelude to an historic crash. I had pointed earlier to the bearish divergence on the Dow Jones in 2013... well, it’s now triple what it was! Volumes are abating and it seems that the smart money has been packing to leave. 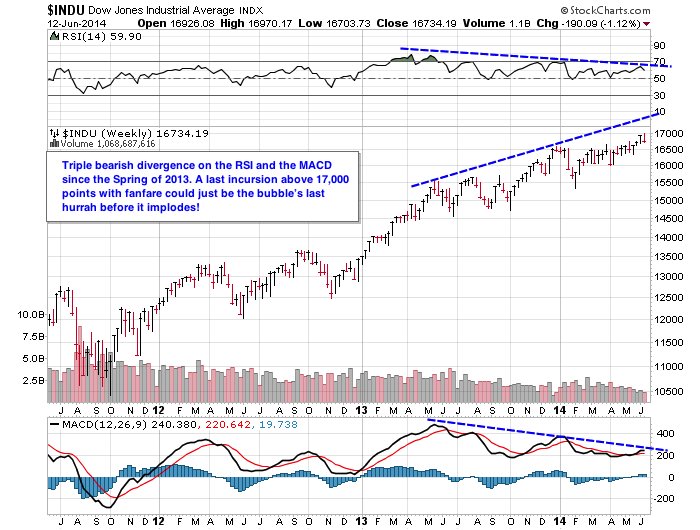 The next two charts by Dan Popescu show us why controlling the gold price is untenable : 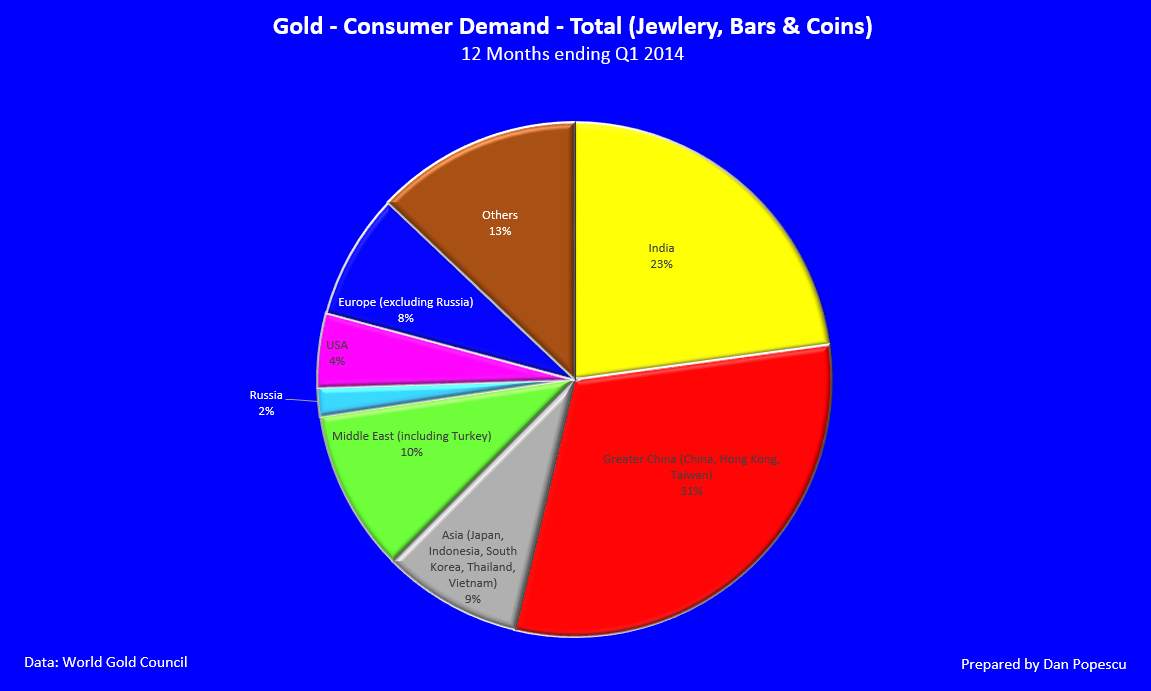 China and India are clearly major actors in physical gold demand. In 2013, China’s demand for gold exploded, as can be seen on the second chart, and, in 2014, India will lift the brakes on its gold imports! 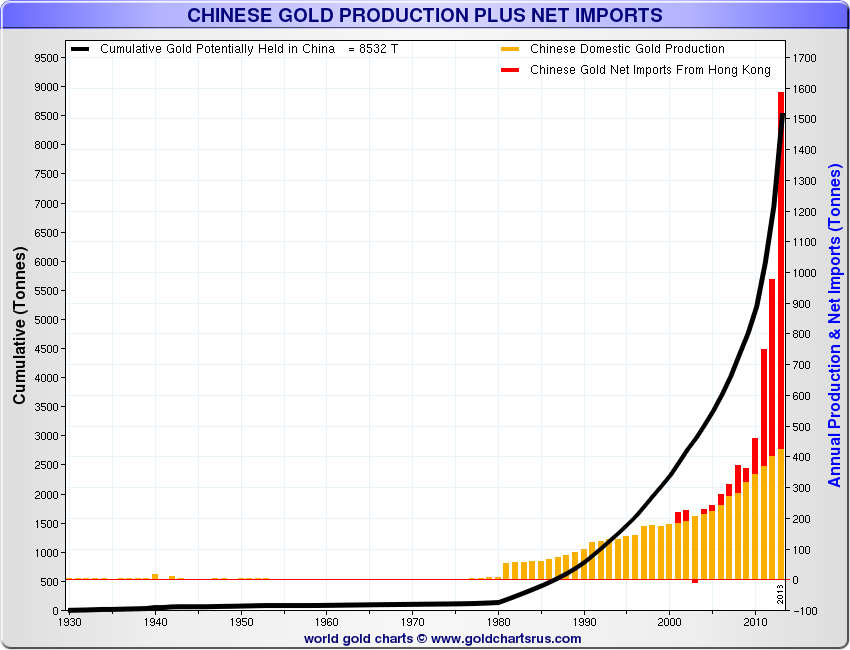 To that, we can add that Western investors’ demand cannot hardly go lower than it is now, while it could easily explode with the next peak in volatility on the stock markets. All the ingredients are in place to totally dry up the physical gold market.

And this is without talking about the coming troubles of the dollar, world reserve currency, holding by a thread... and that could cause the greatest monetary crisis of all times or accelerate China and/or Russia’s preparations to create a new exchange currency for international trade that would be covered by physical gold. For those to whom this sounds totally unrealistic, they have only to look at the timeline of former world reserve currencies... 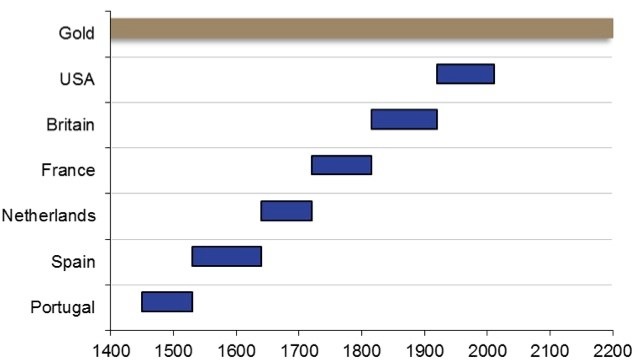 We see, on this chart, that only gold has survived all those currencies that were born out of strength but died of weakness. Let’s recall that, when the dollar became the only currency convertible into gold, the US had gigantic gold reserves! Almost 20,000 tonnes at the end of the Second World War! A far cry from the remaining 8,133 tonnes today, while the monetary mass (M3) in dollars has been multiplied by 100 since the end of the war!

The taking out of 900 tonnes of physical gold from ETFs in 2013 cannot be repeated anymore, because what little gold is left in the ETFs has certainly been accumulated by investors looking for financial or monetay insurance. Well, are you listening, Goldman Sachs, not everyone is a speculator in this market!

Being unable to supply the physical market with these low prices, the bullion banks trying to control the price on the COMEX are getting more and more into an untenable situation. Signs of backwardation have multiplied in 2013 and 2014, while this was extremely rare in the past.

Today, the small juniors are clearly telling us that the latest attempt to gain control of the bear market in gold has failed and that gold will definitely go back above $1,300. The same insiders who were selling gold miners before the price of gold cratered in 2013 have come back to buying since the start of the year, seeing they’re probably in the know about the limits in price manipulation. The Golden Cross signal at the start of the year was stopped by a new bear raid, but the definitive reversal in the gold market has probably already started in December 2013.