We have been talking for years on this site about the very high probability of seeing the emergence of a new monetary system, replacing the current one, based on one or more currencies once again convertible into tangible assets.

If the IMF does not speak (for the moment) directly about using physical gold in this new system, the institution has however just announced that a new "Bretton Woods" was necessary to manage the post-crisis period and to restructure the debt of the G20 countries which, let’s remember, were blown away following the Covid-19 pandemic. It is recalled that the World Economic Forum is even more direct since they announced the launch of the initiative "The Great Reset" or "major restructuring".

.@KGeorgieva: Just as our founders did at Bretton Woods in 1944, we now face two massive challenges: to fight a crisis today while also building a better tomorrow. This is a new Bretton Woods moment. https://t.co/ARruTjMLF8 pic.twitter.com/epZa09Vfgd

The timing of this announcement is disturbing to say the least, but perfectly logical to attentive observers.

It is well known that the status of the dollar as an international reserve currency is no longer appropriate for everyone. China, Russia, Europe and many emerging countries no longer tolerate the instrumentalization of the dollar serving only American interests. The many tensions that we observe at the global level must be understood as consequences of a struggle for a change in the monetary system. The major creditors of the United States continue to offload their US debt securities, and it is now the Fed that buys the majority of Treasury bills to finance the US deficit. However, this financing through pure monetary creation has the consequence of destroying confidence and the purchasing power of the dollar. A new system will have to emerge, all bets are off. There is no longer any international political will to continue to use the dollar as a reserve currency.

Let's recall an important point: the IMF, with 2814 tons, is the third largest holder of physical gold in the world. If the SDR option (the currency issued by the IMF) could be used, it would only be temporary. Only a return to a reserve currency convertible into physical gold will restore the confidence that the players in the world economy need to start again on a sound footing and provide the liquidity (inflation) to repay the abysmal debts that are plaguing the current system. 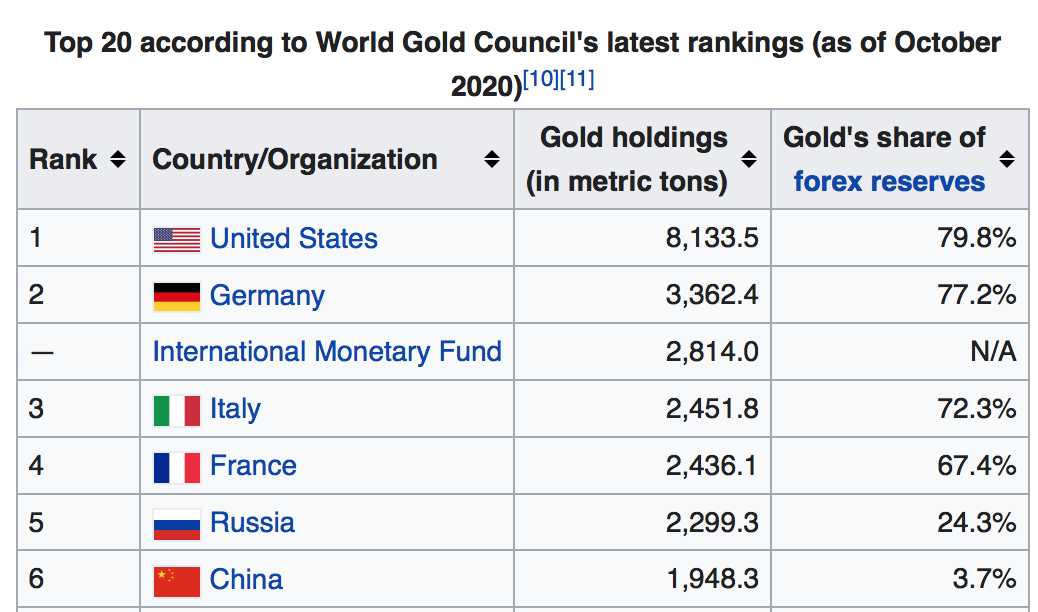 The IMF and major central banks are comfortably seated on large gold reserves. This is no coincidence. A major revaluation of the gold price is now in their interest and would provide the answers to the problems they face.

To conclude, the central banks desperately want a return of inflation to dilute accumulated debts and clean up their balance sheets, and the IMF, pushed by the powers China, Russia, Europe and emerging countries, wants a new, more neutral and fairer monetary system.

It is hard to see what other asset than gold could be at the base of this system since it is neutral and relatively well distributed among the central banks of the world's major economic powers. A revaluation of its price would provide the liquidity needed to repay debts and reset the monetary system to zero