Silver has recently become a hot investment theme. For months, if not years, some analysts claimed that silver is undervalued relative to gold. Then, at the beginning of 2021, Reddit revolutionaries tried to trigger a short squeeze in silver. Although that attempt failed, silver has, so far, clearly been outperforming gold this year, as the chart below shows. So, is silver now a better investment than gold? 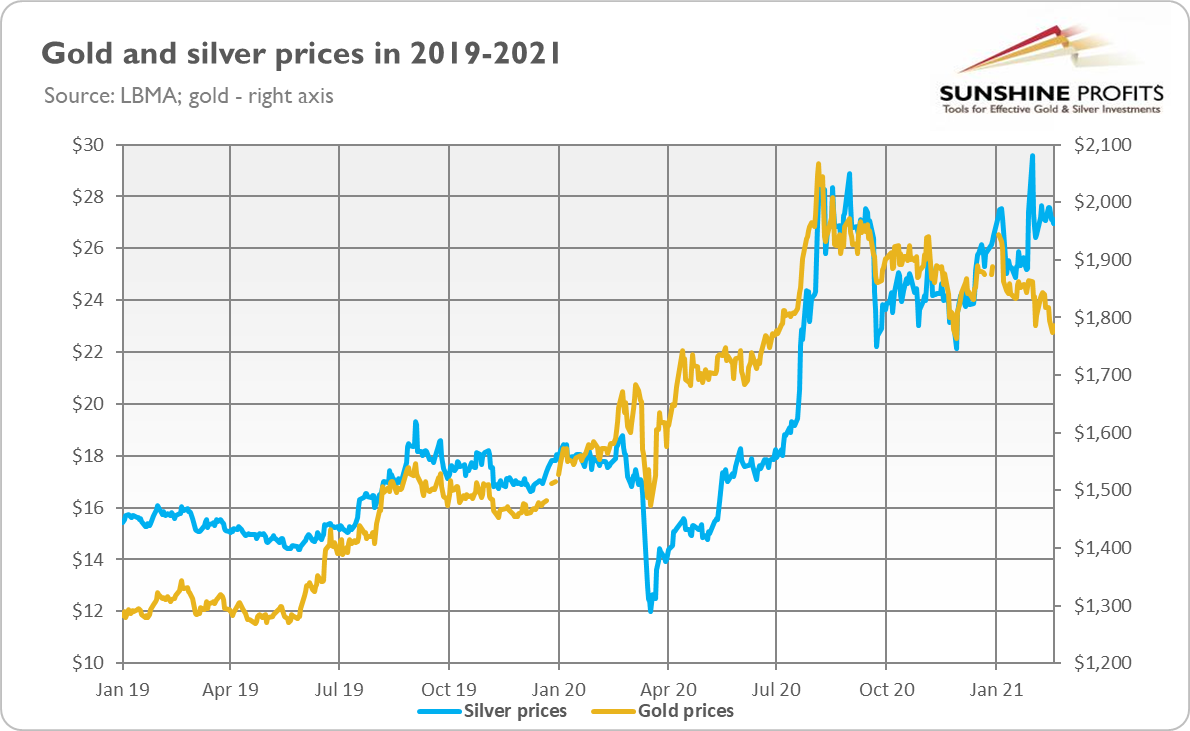 Well, why would it be? After all, many investors buy silver for the same reasons that they purchase gold – it’s a rare, monetary metal which may be used as an inflation hedge, a safe-haven asset against tail risks, or a portfolio diversifier. It’s just cheaper than gold – and this is why it’s often called the poor man’s gold.

Indeed, silver has a very high positive correlation with gold. Just take a look at the chart below, which illustrates the movement of gold and silver prices since April 1968. The shapes of the lines are very similar and the correlation coefficient is as high as 0.90! 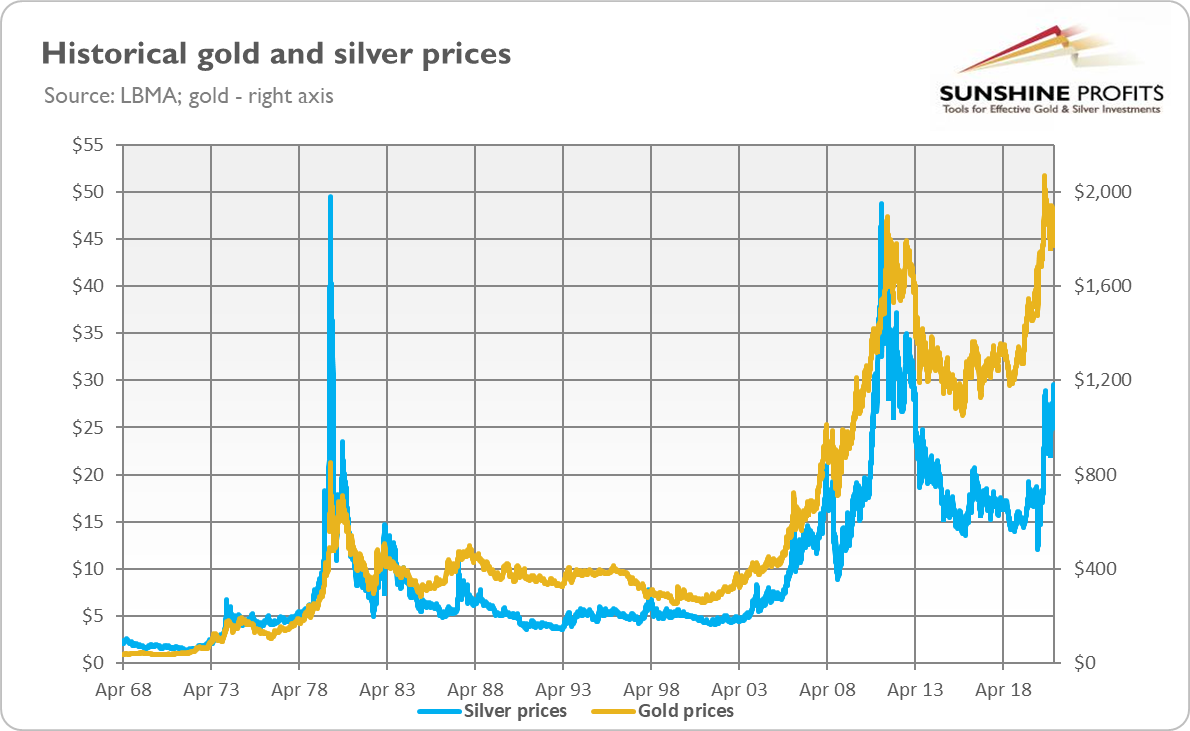 On the other hand, silver may indeed outperform gold. After all, silver has a dual nature. It is not only a monetary asset – like gold – but also an industrial commodity. This implies that silver is more business cycle - sensitive than gold. Therefore, given that the global economy is recovering from the deep recession caused by the coronavirus pandemic and the Great Lockdown, silver may outperform gold. In other words, although both gold and silver could benefit from reflation during the recovery, improving economic conditions could support the latter metal more.

Another argument for silver shining brighter than gold in 2021 is the historical pattern according to which silver prices tend to follow gold prices with some lag, just to catch up with them later – often overreacting compared with gold’s behavior.

So much for theory. Let’s move on to the data now and analyze the previous economic crisis, i.e., the Great Recession, and the following recovery. As the chart below shows, both metals moved generally in tandem, however, silver was more volatile than gold. 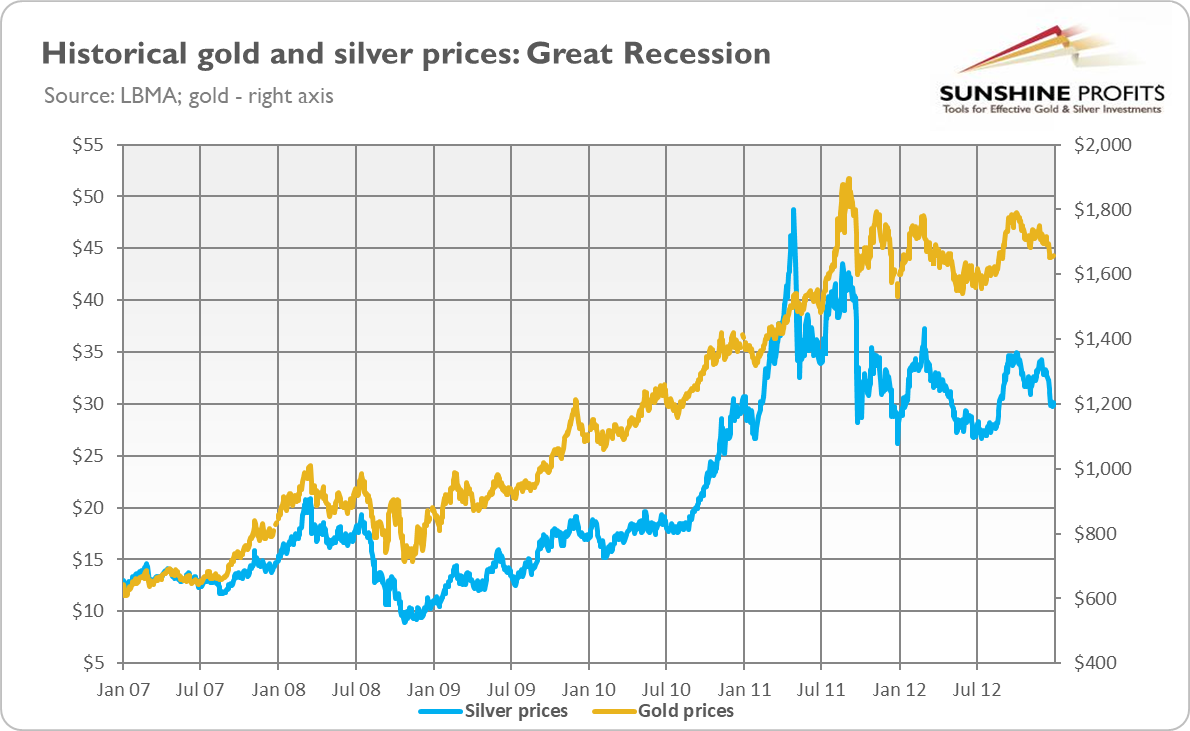 For example, from its local bottom in mid-2007 to its local peak in early 2008, silver rose 79 percent, while gold “only” 57 percent. Then, in the first phase of the global financial crisis, silver plunged 58 percent (from $20.92 to $8.88), while gold slid 30 percent (from $1011.25 to $712.5). Subsequently, silver skyrocketed 448 percent, reaching a peak of $48.7 in April 2011. Meanwhile, the price of gold reached its peak of $1875 a little bit later, in September 2011, gaining 166 percent. Finally, silver plunged 46 percent by the end of 2011, while gold dropped only 19 percent. This shows that the economic recovery and industrial revival that followed the Great Recession didn’t help silver to shine. Actually, the bluish metal underperformed gold.

Similarly, silver plunged more than gold (25 versus 17 percent) in the run-up to the burst of the dot-com bubble, as one can see in the chart below. It also gained less than gold in the aftermath of the 2001 recession (25.4 versus 27.5 percent), and then it plunged in the third quarter of 2002, significantly underperforming gold. 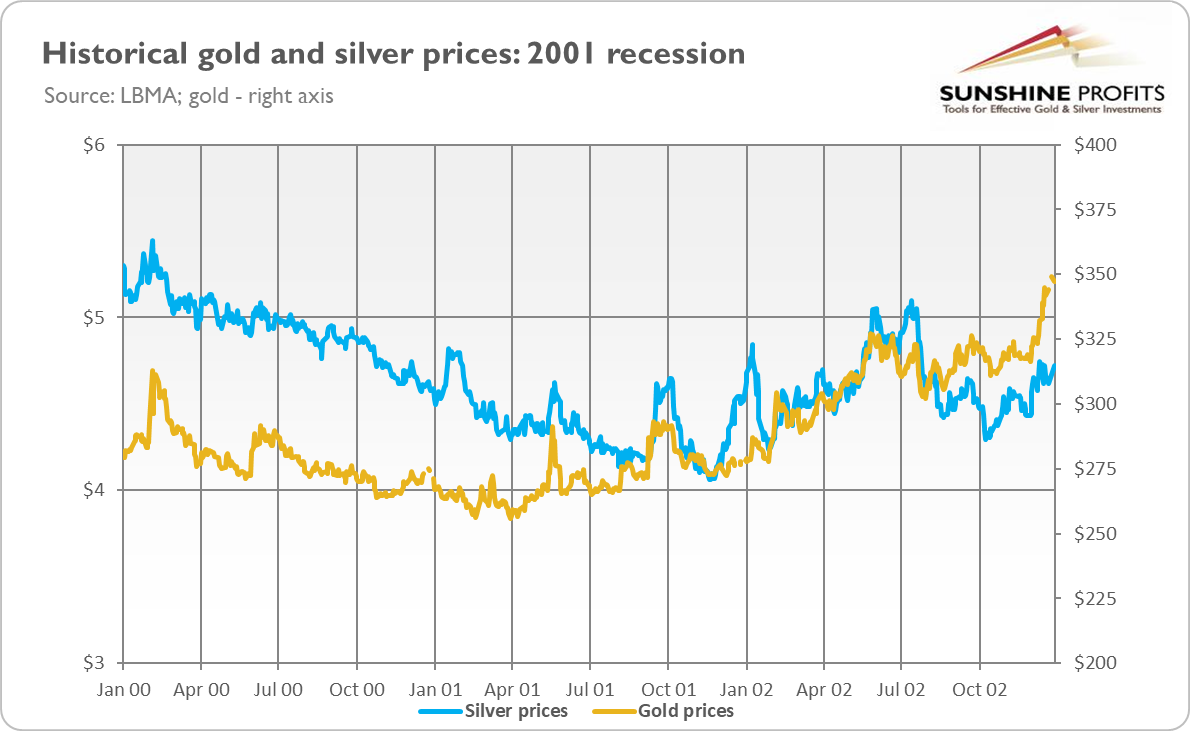 Therefore, the recent history doesn’t confirm the view that silver should be outperforming gold in the early stages of a recovery, because it’s an industrial commodity that benefits from improving economic conditions. Silver was never in a bullish mode when gold was in a bear market, and it rather tends to rally rapidly in the late stage of the commodity cycle, like in the 2000s.

Actually, one can argue that silver has the best period behind itself. After all, it soared 141 percent from late March to September 2020, while gold rallied “only” 40 percent. So, it might be the case that the catch-up period, in which silver outperforms gold, is already behind us. Indeed, as the chart below shows, the gold-to-silver ratio has recently declined to a more traditional range of 60-70. 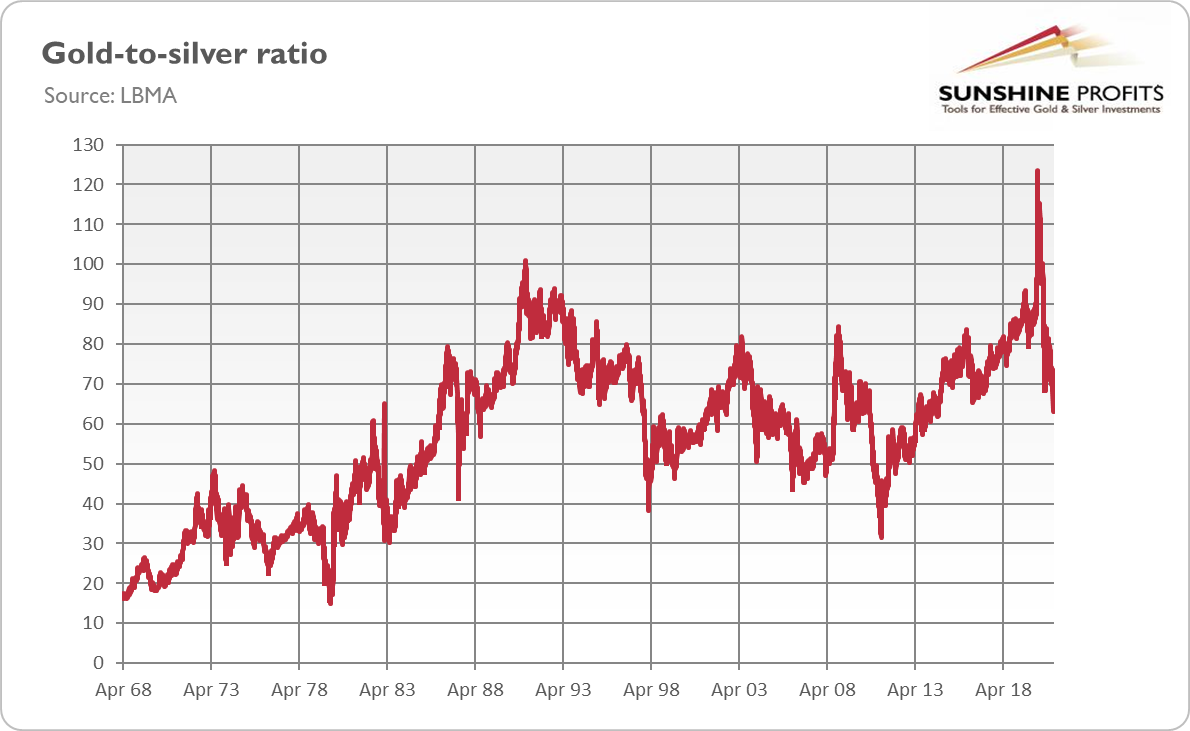 This, of course, doesn’t mean that silver cannot rise further. However, it seems that the metal has already caught up somewhat with its more precious cousin. So, it’s possible that silver can outperform gold in 2021, as Biden’s focus on renewable energy may help silver – as a major part of the metal used in industry is now linked to solar panels and electronics, but history teaches us that investors shouldn’t count on industrial demand. Silver didn’t outperform gold during recoveries from the previous recessions. Although silver has a dual nature, its price is highly correlated with gold prices. Therefore, macroeconomic factors, such as the U.S. dollar, real interest rates, risk appetite, inflation, public debt, monetary policy, fiscal policy, etc., should have a stronger impact on silver than industrial demand. As always, those entering the silver market should remember that silver price movements are more violent than in the gold market.