The prices of gold and silver have dropped severely today, November 28th 2012. 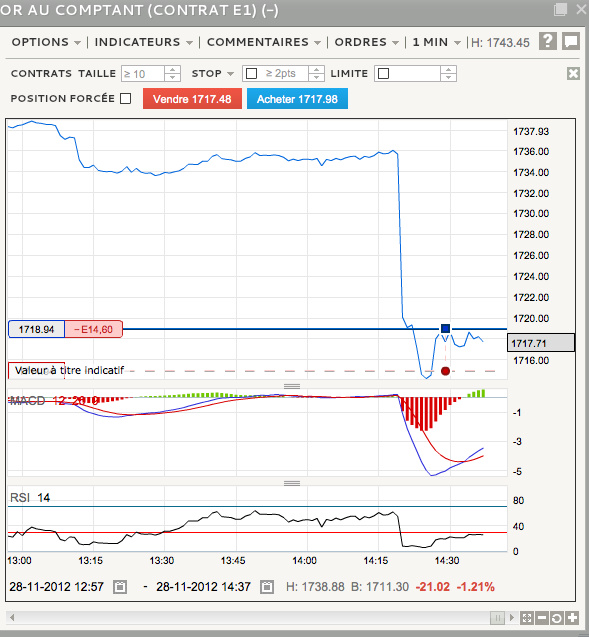 Such a huge drop in less than a minute, only one day after options have expired, is quite hard to explain in a so-called free market in which no one is interfering.

1) No trader or investment fund would sell such quantities of contracts expecting the best price. On the contrary, a progressive type of selling to avoid heavy price drops is always the way it is done. It doesn’t make any sense that an investment fund or an important trader with a « fat finger » would have thus sold to rake in the yearly 2012 profits.

2) What does make sense, though, is a shorting strategy from a very big player in order to bring prices down and realise profits by buying later in the day at a lower price. But who has deep enough pockets to sell so many contracts in 60 seconds ? Meaning, who besides the biggest bullion banks that are strapped with naked short positions that they’re desperately trying to cover by engineering such a crash ?

3) It is impossible for a crash of such a magnitude to be happening simultaneously on two important markets like gold and silver. Of course, the CFTC, the US regulatory agency, will give us an explanation... in a few years. There is an on-going investigation that has already lasted four years.

4) Some are advancing the hypothesis (China) of an « organised » manipulation in order to buy at a cheaper price physical quantities on the London markets (an important number of put contracts for January 2013 has been registered last night). But the Chinese and the Asian buyers are already enjoying artificially depressed prices and are accumulating as much gold and silver as they can.

5) Could this have anything to do with the problems the COMEX is facing with the delivery of the physical gold backed by the December 2012 contracts ? Do they want to scare the investors from asking for physical delivery of their gold ?

Whatever is the reality, or realities, underneath this drop, manipulation or no manipulation, there is no doubt that savvy investors will take advantage of this dip to pile up more « physical » at this artificially depressed price.

As Egon von Greyerz (member of Goldbroker.com’s board of directors) says, gold is not in a bubble (see his video), with only 1% of the world’s savings invested in gold.

Gold is just about to close its twelfth consecutive year of growth, so patience and the understanding of the different elements influencing the gold and silver markets are the keys helping to support a volatility that is wrongly interpreted as inherent to risky assets.

As a reminder, gold and silver have been the two best performing assets in the first four years of Obama’s presidency.