Silver: Development of the Third Leg Up

This third leg up should bring a virtually continuous rise to about $ 19.5 in October. After a quick consolidation to $ 17, silver will resume its rise to its first goal, which is $ 21.

The $ 21 level should be reached either in December or in the first weeks of 2020. 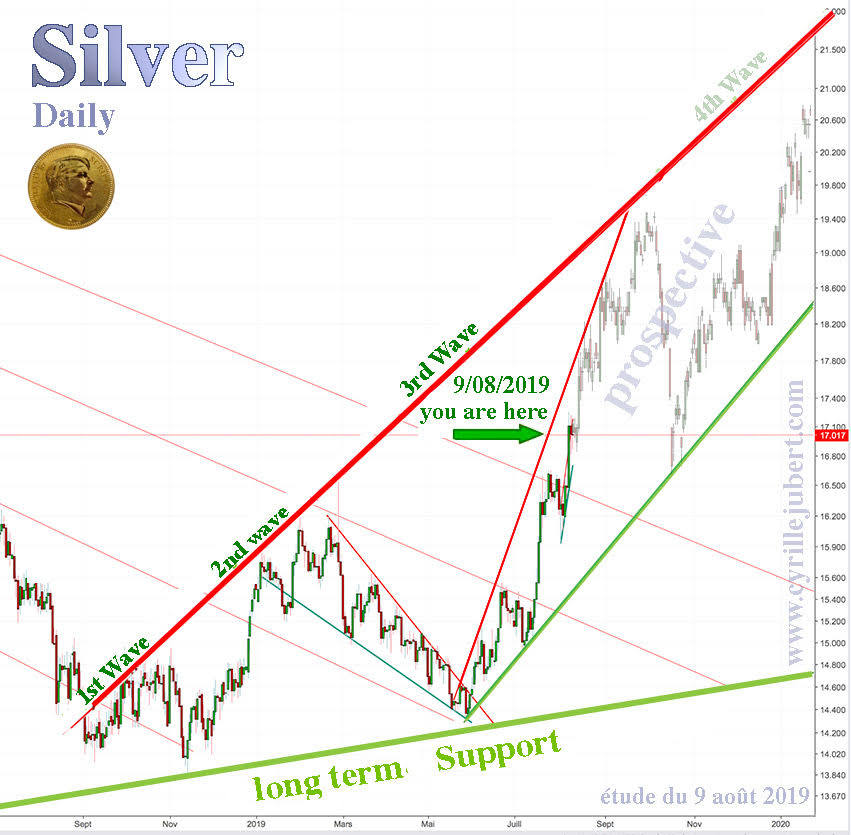 The courses of prices had always followed the principles discovered by Fibonacci long ago. For silver, it's obvious.

The $ 21 level should be reached around January 2020 and the $ 34 level around October 2020... Afterwards, it seems to me, that there should be a sharp acceleration of the space-time.

But we're not yet there. 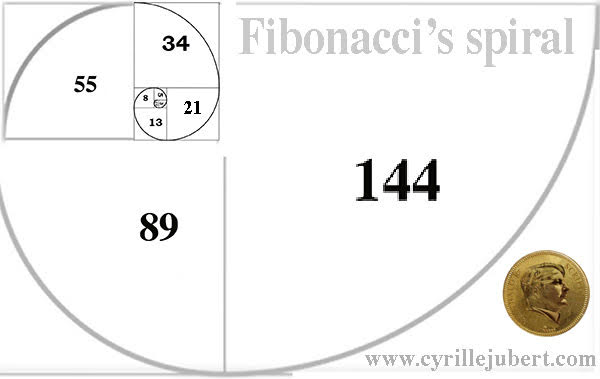 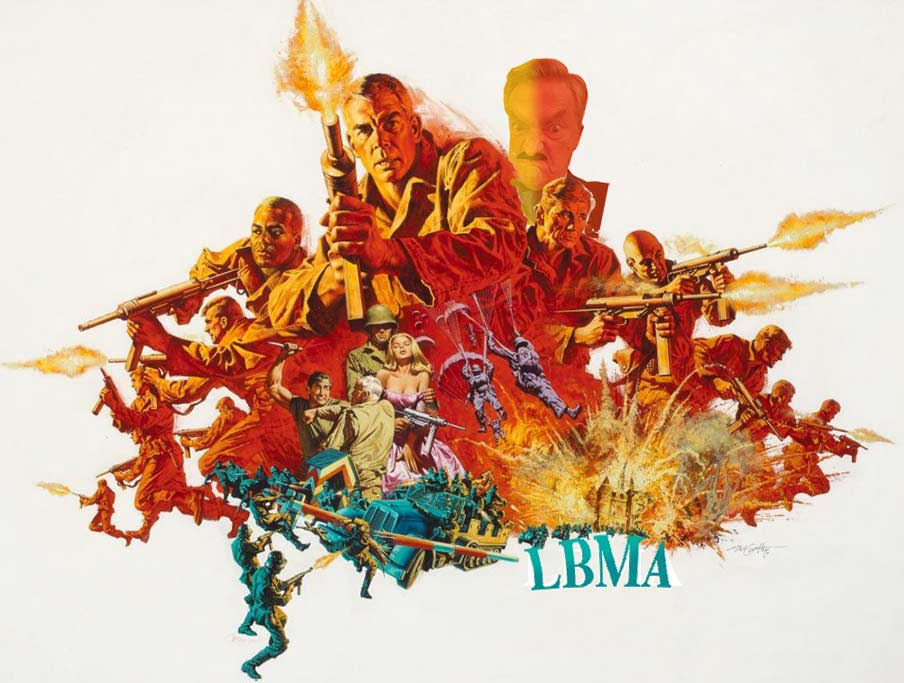 In April 2019, Société Générale has thrown the towel, abandoning its role of "market-maker" in the London's synthetic gold and silver market. In this market, traditionally twelve bullion banks hold the market. But we are witnessing a real exodus: 80% of the banks from the London Gold Fixing have abandoned the LBMA ghost ship.

Since 2014, some of the biggest names of the market maker's cartel had been leaving London's precious metals market: Barclays Bank, Deutsche Bank, Mitsui & Co and Credit Suisse dropped out of LBMA. In hindsight, the numerous additions to the list from the end of 2014 to the beginning of 2016 seem to have been substitute replacements while keeping the number of banks constant.

Could this defections of SG be the beginning of a new wave of departures, and the first sign of a scandal on the London markets for synthetic precious metals?

On July 8, 2019, Stafford MP, Jeremy Lefroy challenged Treasury Secretary John Glen at the House of Commons session on iterative manipulations in the London Precious Metals Market (LBMA) - See the report of the meeting. Jeremy Lefroy gave an extremely clear account of the state of the market, where synthetic gold and silver, which have no real existence, represent 100 times the physical gold and silver in the warehouses. He denounces the manipulations made through ETFs, which also have no obligation of reality, nor any obligation to be audited. In conclusion, he demonstrates that these markets are totally falsified in a fraudulent manner, contrary to the British law.

The Economic Secretary to the Treasury seemed to master the subject perfectly. He talked about derivatives that can be justified to protect themselves from market risks, but at the same time, can be a danger to the global financial stability. He mentioned the various rules put in place in 2017 on the LBMA and the specialized services, which investigate any risk of market manipulation, whatever the commodity concerned.

Andrew Maguire knows Jeremy Lefroy very well and helped him to make a record as clear as possible about these manipulations of gold and silver prices for the House of Commons. On July 25, in an interview with Craig Hemke of TF Metals Report, Andrew Maguire, said between the lines, protecting his source from one of the largest banks in this market, that new rules are being put in place and that these new rules will prevent any manipulation of prices.

As a result, the bullion banks will leave the big casino, because they could not win anymore by crushing the market’s prices. Andrew Maguire seems certain of that.

The Battle of the Titans

In early August 2016, the Financial Times published an article "Goldman vs. JP Morgan in the Gold Battle," revealing that Goldman Sachs and Chinese bank ICBC, the world's No. 1, have come together to oppose JPM and HSBC on the future of the gold market. The former (GS / ICBC) wanted to create a new market, totally transparent, regulated by a supervisory authority, while the old JPM / HSBC accomplices, just wanted to improve a bit the LBMA, but continuing their opaque OTC negotiations (Over The Counter).

Nevertheless, this first attack of GS / ICBC failed as they did not succeed to create a new market for precious metals.

Since September 12, 1919, in the aftermath of the Great War, the fixing of gold was in the office of NM Rothschild & Sons between the five largest gold brokers in London.

In 2004, the Rothschilds passed... curiously, at the exact moment when the ETF GLD was launched, a financial product allowing speculators to invest in gold, but without having to touch an ingot, to insure it or to find a safe. GLD is supposed to buy physical gold ingots based on the number of shares bought by speculators. Some analysts have argued that the cash of speculators playing a gold rally, was used by the bullion banks to take a contrary position in the markets.

A similar product was launched two years later, for silver metal, with ETF SLV. JPM and HSBC were the official custodians of the GLD and SLV metal stocks, and at the same time, custodians of these same metals for the COMEX and for the LBMA, and the two largest players in the gold and silver markets.

All this has always stunk like an international swindle.

But after the scandal over LIBOR, the judicial investigations of the various banks handling the markets began to rain and since then the LBMA has been forced to move.

As you know, gold passed Tier One in March 2019 and all banks will have to meet the Basel III standards on December 31, 2021.

The Basel III standards refer to the NSFR (Net Stable Funding Ratio) the full definition can be read on the BIS website. This NSFR requires banks to have capital sufficiently liquid and proportional to their commitments on the markets.

Since the beginning of 2019, there had been harsh negotiations between the LBMA, the European Union and the BIS, to force the bullion banks to have NSFR liquidity covering 85% of their speculative positions on precious metals. LBMA had been campaigning to reduce this cash to 50%. (Reuters)

Anyway, this structural Net Stable Funding Ratio is a real handicap for the bullion banks, which until now could speculate with only 5% or 6% margin deposits and therefore gigantic levers. The Dirty Dozen is now on a suicide mission on the LBMA.

The current turn of the Commercial War, officially transformed in August into a currency war, reinforces the role of precious metals as safe havens. Bullion banks in short positions may end up in short-squeeze in the face of a very strong demand for gold and silver.

The mission of the Commodity Futures Trading Commission (CFTC) is to foster open, transparent, competitive, and financially sound markets.

The new chairman of the CFTC, Heath Tarbert, who took office in the last days of July, decided that the gendarme of the precious metals exchange would do its job. Heath Tarbert decided to limit the volume of derivatives, especially on precious metals. (His speech of July 29)

So the bullion banks are under attack in London as well as in New York.

A whale in the silver market

Every week, the Commodities Exchange Constable, the CFTC, publishes traders' positions (COT) globally, but also by "Large Traders" categories "commercial hedging their production" and "speculators". They also publish the positions of the four biggest traders and those of the eight biggest traders. Most of the time, the Large Traders hunt in band and are all put in "short" position, in front of the "hedgers" and the speculators, who are "long", if they think that metals will go up.

Alasdair Macleod detected an anomaly in the money market on July 11th. One of the biggest "Large Traders" now plays a totally different part of the other 3 since March 2017. 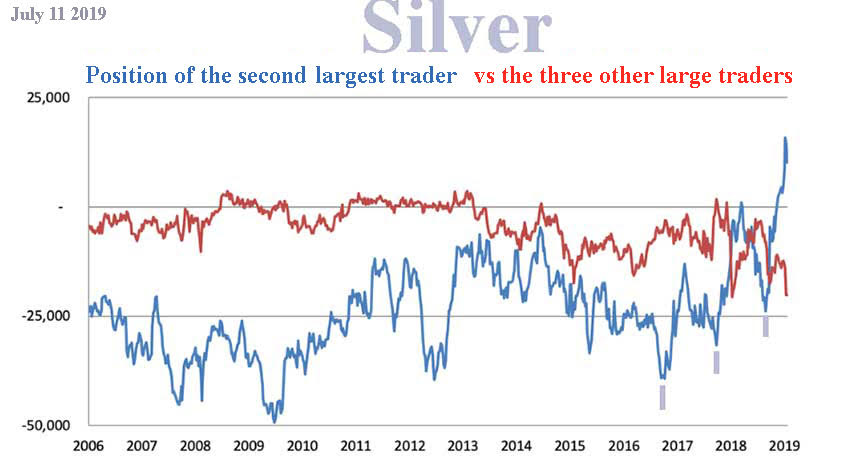 You will note, that exactly a year ago, I wrote an article "Someone is cornering the silver…" Part 1 and Part 2.

For the Monetary Reform to take place, it is essential to raise the price of precious metals to levels much higher than the current prices. The silver price should most likely be close to $ 500 an ounce at that time.

To understand the future, study the past

This could take less time than in the seventies, because today the whole system is close to bankruptcy. There is an urgent need to save it.

Be fearless, you can enjoy your vacation, the central banks are at work 24 hours a day 7/7.