On 30 November 2014 the Swiss People has the opportunity to determine not just the fate of their own financial system but also to be the catalyst for the return to sound money in the Western World.

On November 30th the Swiss will vote on:

1. Returning their national gold which is held abroad back to Switzerland
2. Requiring the Swiss National Bank to hold 20% of their assets in physical gold
3. Prohibiting further gold sales

So why is this referendum so important? Because Switzerland has, for hundreds of years, been a bastion of sound monetary policy and low inflation. But this has gradually changed in the last 100 years since the creation of the Fed in the US and especially during the past 15 years when the Swiss government quietly removed the 40% gold backing from the revised Federal Constitution which was adopted by popular vote in 1999.

No paper currency has ever survived throughout history in its original form. And the Swiss Franc from having been a strong currency is now in the process of being slowly destroyed by the recent policies of the Swiss National Bank (SNB).

Since 2008 the SNB’s balance sheet has expanded 5 times from CHF 100 Billion to CHF 500 Billion. So Switzerland has printed around 400 Billion Swiss Francs in the last 6 years in order to hold its currency down against the Euro and other currencies. CHF 400 Billion is around 2/3 of GDP.

This means that Switzerland has printed more money, relatively, than any major country in the world in the last 6 years. 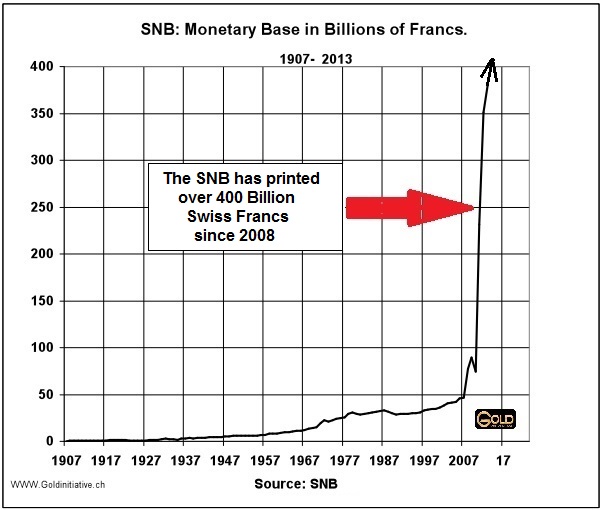 For a very long time, the Swiss Franc appreciated against most currencies and Switzerland prospered with a strong economy, strong currency and lower inflation than most major countries. It is of course a fallacy to believe that a weak currency benefits a country when Switzerland has proved that the opposite is the case.

Between 1970 and 2008 the Swiss Franc appreciated by 330% to the dollar and 57% to the DM/Euro. So for almost 40 years a very strong Swiss currency went hand in hand with a strong economy. In spite of this proven success, the new guard in the SNB decided to abandon proven successful policies and print money like most other countries.

To tie the Swiss Franc to a weak currency like the Euro and a very weak economic area like the Eurozone is a recipe for disaster. To align your country to a failed political and economic experiment can only lead to failure.

But it is not only the SNB that is now following unsound policies but so are the big Swiss banks. From an equity ratio of 15-20% 100 years ago, the big Swiss banks are now down to 2-3.5% (note: because the basis of calculation changed after 2007 it is difficult to make an exact comparison). This means that the big Swiss banks have a leverage ratio of 30-50. Thus a loss in their loan book of 2-3% would be enough to wipe out the entire bank. It is virtually certain that when interest rates go up, the Swiss banks will have losses on the balance sheet or on derivatives that are considerably higher than 2-3%.

A “JA” (YES) vote victory for the Gold Initiative would prevent Switzerland’s economy and currency to reach the same destiny as all paper currencies in their race to the bottom. 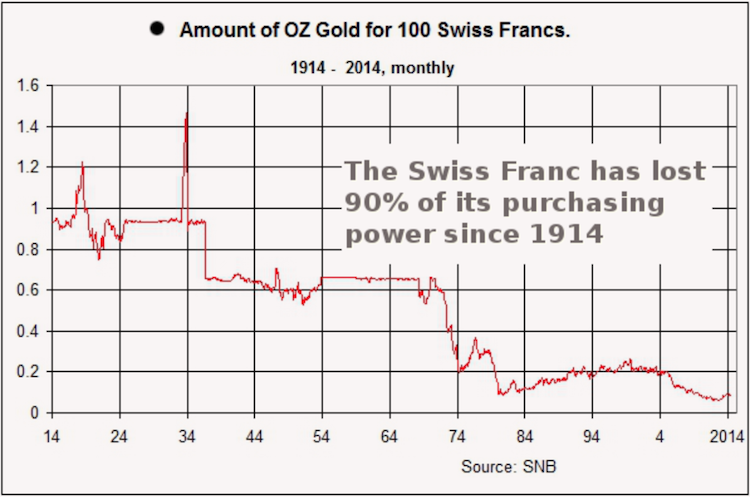 To avoid this fate, Switzerland now has the opportunity to be the first country in the world with official partial gold backing of its currency. A currency backed by gold means the government and the central bank cannot manipulate the currency at will and print worthless pieces of paper that they call money. This would stabilise the real value or purchasing power of the Swiss Franc. A currency with stable purchasing power leads to stable prices and promotes savings and investment rather than spending and credit. Officially Switzerland, like most countries, has a low inflation rate but for the average person, consumer prices in the shops for food and other necessities continue to rise.

Even though the official Swiss inflation is low, there is massive inflation in some sectors like housing and financial assets. The money printing in Switzerland combined with artificially low interest rates have led to a major housing bubble. Swiss housing prices are now unaffordable for most Swiss and in relation to income prices are now in an unsustainable bubble. An increase of Swiss mortgage rates from current 1-2% per annum to a more normal 4% could lead to major mortgage defaults and a housing collapse.

The Swiss have a history in putting some of their savings into the Vreneli, the Swiss 20 franc gold coin. In recent times, as spending on credit rather than savings has been the norm, the Swiss have bought less gold but in spite of that they have more affinity with gold than most Western nations. The Swiss gold industry is also very significant since the Swiss refiners produce nearly 70% of the world’s gold bars.

The most proliferate savers in gold are of course the Indians mainly by buying jewellery. But in the last few years, China has been the biggest buyer of gold. There is a constant flow of gold going from the West to the East. This has created a shortage of gold in the West.

Switzerland used to have 2,600 tons of gold but sold half of it between 2000 and 2005 close to the bottom of the market, just like the UK did. That has cost the Swiss People CHF 27.5 billion at the current gold price.

A YES vote in the Swiss Gold Initiative referendum, would mean that Switzerland would have to buy 1,700 tons of gold at current prices which is $ 70 billion (CHF 67 billion). This is 70% of annual world gold production. The paper gold market is around 100 times bigger than the physical market. The SNB has 5 years to acquire the 1,700 tons. If they wait to buy, they are likely to get less than 1,700 tons for their CHF 67 billion.

In addition SNB would need to bring back 300 tons of gold that is currently in the UK and Canada. If this gold is unencumbered, it should come back immediately. But Germany recently had a different experience. They requested to have 674 tons back from the Fed in the US but all they have received so far is 5 tons! One may wonder of course whether that gold is still there. The Fed has either sold it or lent it out. It is likely that most central banks in the West that have lent gold to the Fed or other central banks will have problems getting it back. That is why it is critical for Switzerland to keep its gold at home.

A “Yes” vote – Beneficial for Swiss economy and Franc

Bringing the Swiss gold back home and partially backing the Swiss Franc with gold will be extremely beneficial for the long term prosperity of the Swiss economy and the Swiss Franc. It will also make Switzerland respected by people worldwide for introducing sound money. It is also likely to set a trend for other countries to follow Switzerland’s example. Therefore a YES vote on November 30, will not only be beneficial to Switzerland but also to the world economy. It is also likely to have an immediate effect on the depressed and manipulated gold price. The holders of paper gold will be concerned and demand delivery of the physical gold against their paper claim. Since there is nowhere near enough physical gold to cover all the paper claims we are likely to see a major surge in the price of gold.

> Learn More: If You Say "No" to the Gold Initiative Referendum

In May of this year Lukas Reimann, Nationalrat (member of the Swiss Parliament) made the following speech before parliament:

Thus, Switzerland now has the unique opportunity to create history and to lead the world back to a sound money policy and I would urge my Swiss compatriots to support the Gold Initiative on November 30.