Gold may benefit from government money flooding households and people less willing to work – as evidenced by the low value of nonfarm payrolls.

According to the recent BLS Employment Situation Report, total nonfarm payrolls rose by 559,000 in May, following disappointing increases of 278,000 in April, as the chart below shows. What is disturbing here is that this time the US economy also added significantly fewer jobs than expected – economists surveyed by MarketWatch forecasted 671,000 additions. Moreover, labor force participation and employment-population rates were little changed, remaining significantly below the pre-pandemic levels. 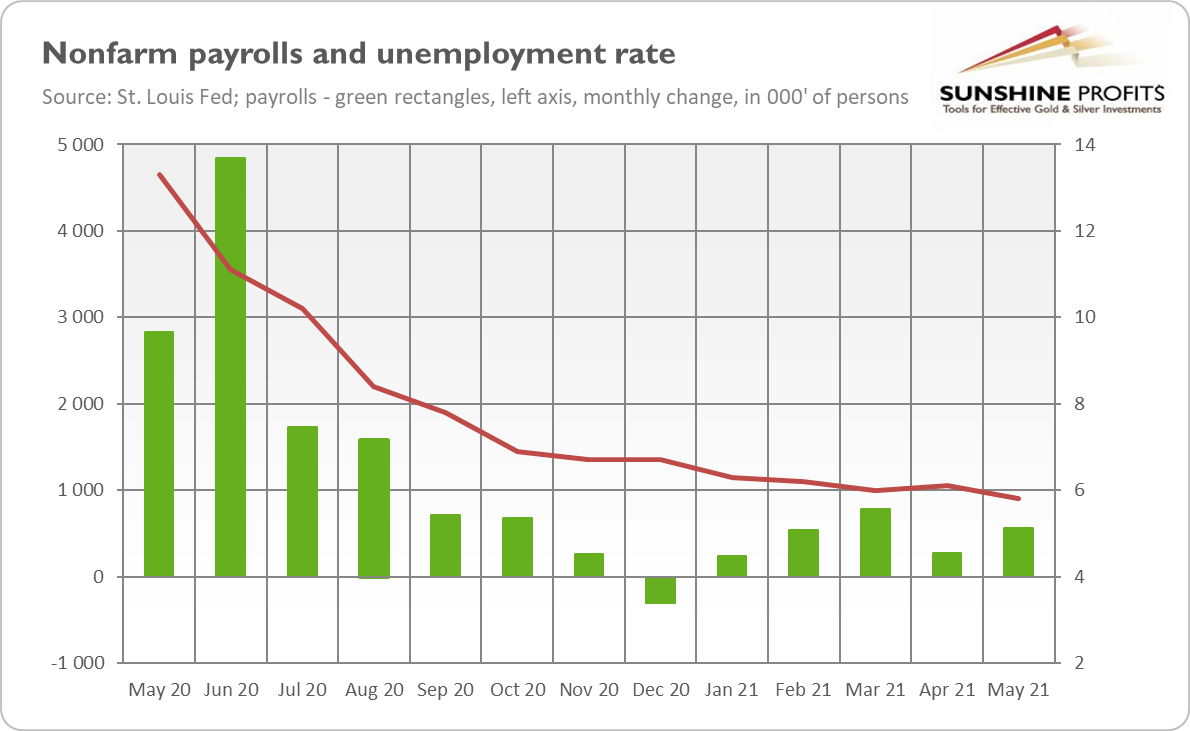 On the positive side, the unemployment rate edged down from 6.1% to 5.8%, as the chart above shows. However, even though the number of unemployed people fell considerably from its recent high in April 2020, it remains well above the level seen before the Covid-19 epidemic. In February 2020, 5.7 million Americans were without a job, while now it is 9.3 million. It means that the labor market is still far from recovery. Or, actually, given all the generous unemployment benefit supplements introduced during the pandemic, the new equilibrium unemployment rate may be simply higher than in the past.

Anyway, the new employment situation report is positive for the gold market. May nonfarm payrolls report is disappointingly weak and missed expectations for the second month in a row. It means that the April report wasn’t just an accident, and the US labor market has to face some serious problems.

The sad truth is that Americans don’t want to work. Even the decline in the unemployment rate was caused to a large extent by the drop in the labor participation rate, as workers just left the labor market. This fact explains why employers report worker shortages despite an army of a few million unemployed people. According to the recent Fed’s Beige Book, many companies have difficulties finding new employees, so they had to boost their wages to attract candidates:

Even the BLS admitted that “rising demand for labor associated with the recovery from the pandemic may have put upward pressure on wages”. Indeed, wage increases accelerated to 2% in May year-over-year, up from just 0.4% in the previous month. They could add to the inflationary pressure or reduce companies’ margins and investments, reducing the pace of real economic growth. So, the jump in wages seems to be good for gold. Hence, the yellow metal could continue its long-term upward trend after the recent pullback below $1,900 (see the chart below). 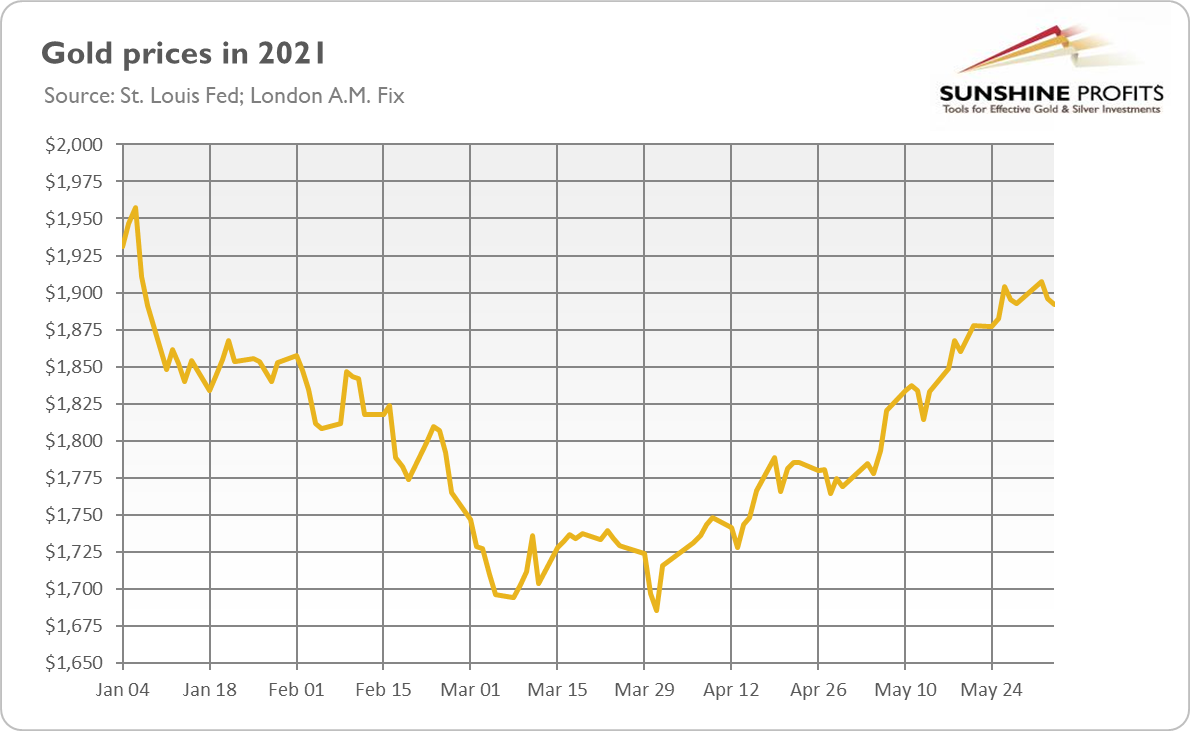 Additionally, disappointing employment situation news will postpone tapering of the Fed’s quantitative easing. The weak nonfarm payrolls report gives a strong hand to the doves within the FOMC who don’t want to even start talking about talking about tapering. Hence, the US monetary policy should remain very dovish, with the real interest rates at ultra-low levels supporting gold prices. Indeed, the expected path of the federal funds rate, derived from the Fed Fund futures, has declined from the prior levels.

In other words, although May nonfarm payrolls report is an improvement when compared to April, the level of employment is still 7.6 million below its pre-pandemic peak. So, even if we see further improvement later this year (which is likely, as many states end the unemployment benefit supplements this month), it will take several more months to fully eliminate the slack in the labor market. The implication is clear: precious metals investors shouldn’t bet on a change in the Fed’s stance anytime soon. And as the yellow metal is very sensitive to tapering fears, this is positive news for gold bulls.